Edible frog is commonly known as green frog or common frog of water. This frog specie is commonly found all over the Europe. This specie of frog is basically a fertile fusion or hybrid of two other type of European frogs i.e. marsh frog and pool frog.

Pelophylax kl. esculentus is the scientific name of edible frog that generally mean both guardian and mud as these frogs live only near the water and never found away from water. Not only that, these frogs live around mud as well that means any area where there is availability of both mud and water, these frogs are commonly found there. 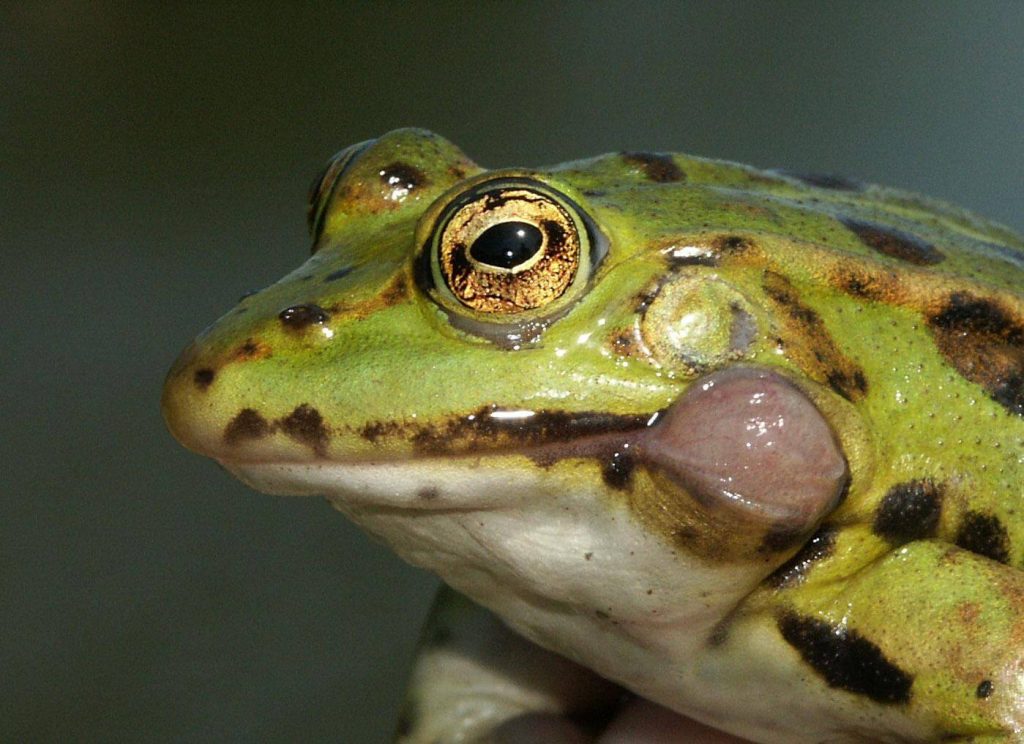 Edible frog considered as a medium size and it grows not more than 9 cm in size. However, size of female edible frog is larger in comparison to male as female ones can reach up to 12 cm.  Adult frogs have a green colour with brown patches at their back, they have yellow eyes and from underside they are white but have dark spots as well.

There are various differences between the female as well as male frog such as at the time of mating   male ones become lighter and greener. On the outer side of the cheeks, male edible frogs also have the vocal sacs whereas on their feet, male ones also have extra patches of skin, both these are primarily comes in use while mating.

This specie of frog is found all over the Europe as far as Estonia and Germany. Southern population of these frogs are found in northern Italy, Croatia and in south France.  In Bulgaria and Sweden there are isolated population as well, it is considered that this population are migrated from the nearby countries.

These frogs love to spend most of their time in water or at a place close to water. Edible frogs love calmness that’s why they choose the calmer parts of the stream and rivers where there is constant and slow flow of water.  These frogs prefer to live near an open area and spotted very easily near the marshes, lakes and ponds.

Edible frog is different than any other kind of frog species because they are diurnal animal and that’s why they are highly active during the time. At day time only they move far from the area of water. This is because at this time they try to find the good supply of food and, if necessary they move from one place to another to live at daytime only.

Edible frog is termed as a solitary animal, due to this there is low level of competition for the food but during the season of breeding, male edible frogs sit together in a group because males compete with each other for the mating. These frogs spend major part of their time by just sitting in a motionless position on the side of banks. During the winter time, edible frogs move to land to spend their entire winter season by hibernating. 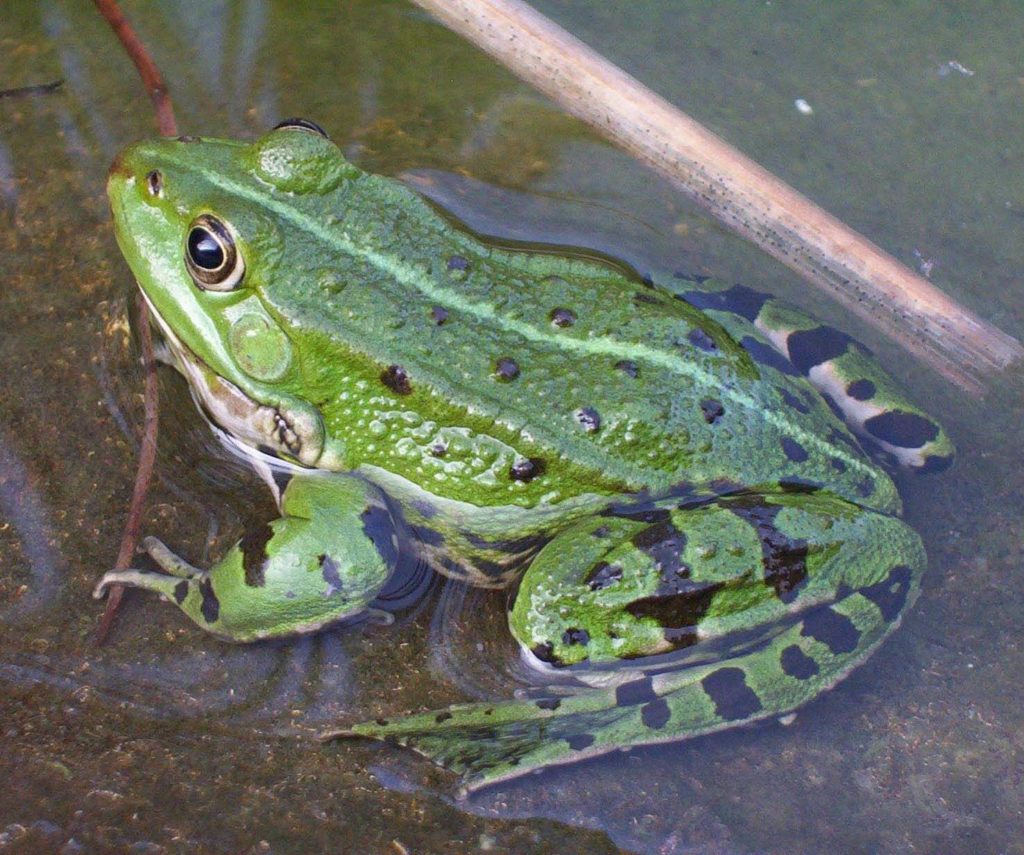 Edible frogs breeding season generally starts from the month of march that last for next couple of months. Male edible frog sings by using their vocal sacs as through the sacs they draw the air in and out that produce the sound. Male frogs try to pitch the highest sound possible because female frogs are attracted to male which draws the loudest voice.  After mating with the females in pond, lake or in swamp, male frog allows the female ones to lay down around ten thousand eggs into water in sticky mass.

When tadpoles come out from the egg they are very small around 0.5 cm in length and generally in brown or grey colour. Before metamorphose these tadpoles can grow up to the length of 7 cm and young frogs are around 2 cm long at time of leaving the water. At the age of two, these frogs reach the sexual maturity and generally they live up to around 15 years.

Edible frogs are known as carnivorous animals and they survive only by consuming the other animals. However, tadpoles are generally eating vegetation but they supplement the diet of theirs with aquatic microorganism occasionally.

Diet or food of edible frogs generally includes the small invertebrates such as spiders, insects, flies and moths, these small invertebrates make most of their diet but these frogs can also consume aquatic animals like frogs, newts and fish, they can also even eat small birds. These frogs generally hunt during the day time and catch their food on both lands as well as on pond.  They prefer to live near the water every time but can go up to five hundred meters away from water in order to get the nutritional diet or food. 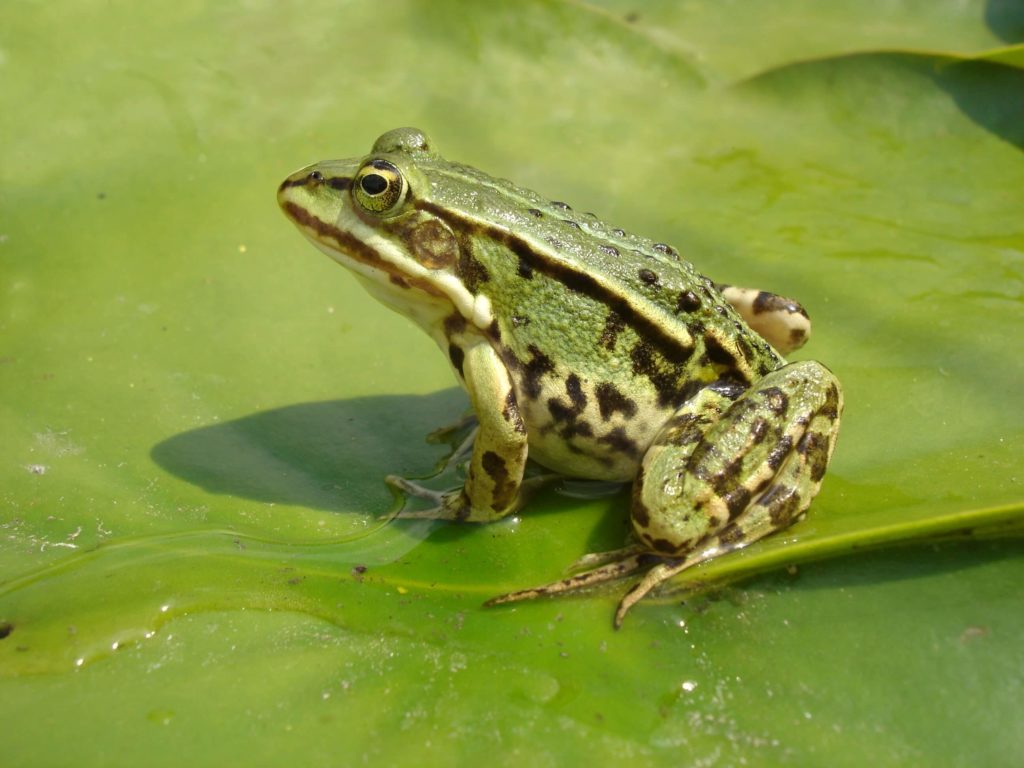 When edible frogs guard their muddy banks they remain in a very still position and because of their camouflage, it becomes very hard for the predators to locate the frog. Edible frogs position their eyes near the head’s top that means they can look for any danger that’s coming to them while remain in a stationary position and hidden from the eyes of predators.

Main predators of these frogs are owls, water dwelling bird and snakes along with humans who usually catch them to eat. If they sense any kind of danger approaching near them they jump right into water and hide under the water until they feel they are safe and if they get caught they make very loud sound of screeching. Population of edible frogs are under threat in some areas because of the destruction of their habitat caused mainly by water pollution and deforestation.