The Indian Elephant is a native species to mainland Asia. Elephas Maximus Indicus is the scientific name of Indian Elephants. They are recognized to be the subspecies of Asian Elephants. In the IUCN Red List, Indian elephants are listed as endangered because their population is declining at a very fast pace. The main reason for this is degradation, fragmentation and loss of habitat.

The size of an adult Indian Elephant can be 6.6 feet to 11.5 feet. Their weight can be around 2000 kilograms to 5000 kilograms. They have a very large body and large head with short neck. They have thick and medium sized legs but their legs are strong enough to behold their heavy body.

Indian elephants have well shaped large ears and trunk that make them look even more gigantic. They do most of their activities with the help of their trunk. Indian elephants mostly possess brown to grey skin color.

Indian elephants are mostly found in their family groups called herd which is led by largest and oldest member of the family. Herds usually consist of 8 to 90 elephants. Indian elephants are completely herbivores and they spend most of their time eating grasses. These elephants mostly prefer to live near fresh water so that they can drink water after eating and whenever required. Elephants prefer to bath in lakes or other water sources near to them whenever they feel hot in summers. They take water in their trunks and pour it on their body to clean themselves.

Indian elephants are mega-herbivorous animals as they rely completely on vegetation for their diet. They can easily consume around 150 kilograms of grasses and plant material in a day. Indian elephants feed on grasses as well as on shrubs and trees so they are considered to be both browsers and grazers.

Because of their heavy diet, these elephants clear large areas and fields of vegetation which eventually gives space to new vegetation to grow. When these elephants live near the cultivated areas, they prefer to eat crops like sugarcane, rice or banana. They eat a lot but they need water to drink only once a day.

Indian elephants mostly prefer to inhabit such areas because they only eat vegetation and they find a good amount of vegetation in these habitats. Also it is easy for them to find fresh water in moist forests.

Humans have been using elephants for different purposes like, for transportation, foresting, for work in the logging camps, for using as war animal to kill enemies and for some other purposes as well. Nowadays in Asia especially in India, elephants are also being used by tourist industry. In some tourist destinations in India you can find that travelers sit on elephants to roam across beautiful places so that they can cover large areas and enjoy scenic views being sitting on elephant. It is mostly used for wildlife safari. Kids also enjoy elephant rides.

Some people also keep elephants as pet but it is not a good option because elephants eat too much and they defecate many times a day and in a large quantity. Also it is hard for anyone to control elephants because of their heavy size. However Indian elephants are mostly kept as a livestock in highly fortified enclosures.

Female elephants begin to breed when they reach age of around 10 to 15 years. After the gestation period of around 22 months, female elephants give birth to one baby elephant which is called calf. Elephant calf usually weighs around 100 kilograms.

If you want to keep Indian elephant in captivity or as livestock, you have to take very good care of them especially of their diet. You have to give them bananas, green grasses and leaves in a good quantity which is perfectly suitable for their diet. Over eating may cause over weight problem in elephants, so you should watch over that. Also elephants need open and large area to roam and walk, so make sure you give them enough space for that. When living in wild, elephants have a tendency to roam tens and more miles just to accumulate food for them, it becomes a part of their nature.

Health issues that are frequent and very common with Indian elephants are ulcers, cracked toes and some other foot problems. You have to take proper care of your elephant if it is seem to be affected by any health issue. 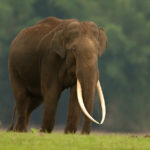 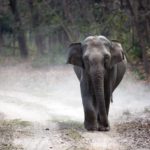 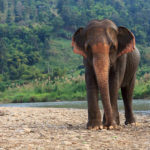 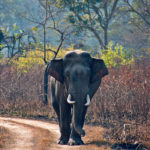 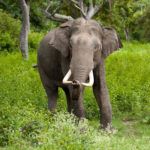 The population of Indian elephant is highly vulnerable to wicked poachers because of their immensely precious and unique ivory tusks. Only male Indian elephants are gifted with ivory tusks and not the female ones. There is ban on the trade of the ivory but still many people do this illegal task and because of this they hunt elephants in large numbers.

Another reason for decline in the population of Indian elephant is their habitat loss. Humans are cutting down forests and vegetation to develop the societies. Humans need land to live, so they have destroyed the habitats of elephants because of which large number of Indian elephants migrate to a new place while some die due to starvation and loss of habitat. Elephants, in search of vegetation and habitat, sometimes enter green fields and farms grown by humans and destroy them. This leads to the conflict between humans and animals.