Dogue de Bordeaux is an ancient breed that is native to the country of France. Earlier, they were bred for hunting the large animals and also used as the fighting dogs. They are very big with impressive looks. This dog breed is extremely agile as well as quick and they can jump even at the high garden fences.

With right socialization and training, they can be an affectionate and a gentle dog. It is gaining popularity in the world as they are the wonderful canines. It is popular as Bordeauxdog, French Mastiff and Bordeaux Mastiff.

Dogue de Bordeaux has descended from Tibetan Mastiff, Bulldog and Molossus’s dogs. When the middle Ages were getting an end, it is used as personal bodyguard and cattle driver. During the era of French Revolution, many Dogues died. Raymond Triquet saved this breed from extinction. After that, Dogue de Bordeaux was established in the country of France and other countries. In the year 2008, AKC recognized this dog breed. 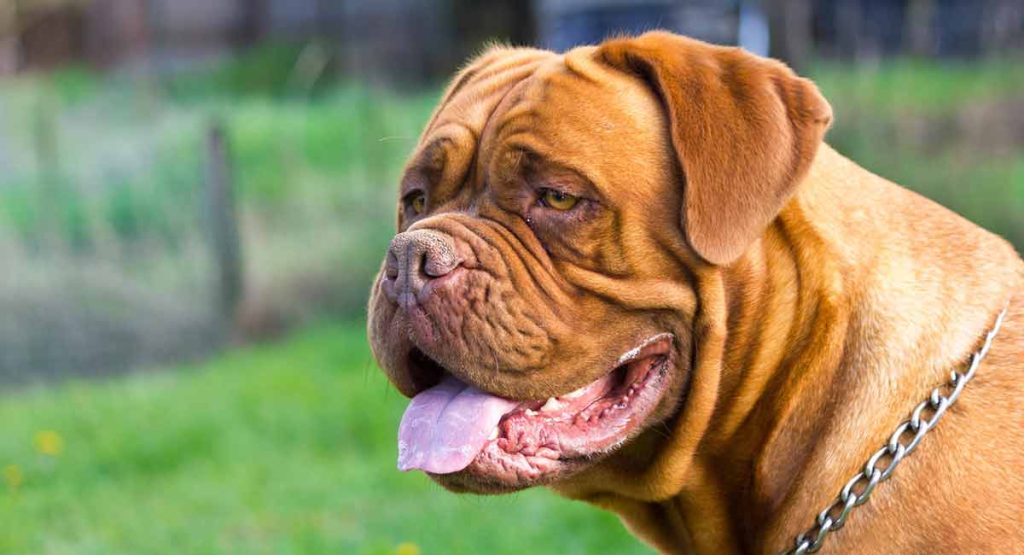 It needs variety and fresh meat in its diet. One can give them dry food like cooked pasta, beef, chicken mince, fresh raw mince and lightly steamed veggies. They can also be given raw bones like turkey necks, brisket bones, lamb necks, chicken carcasses and lamb breasts. Never give them cooked bones. Never feed Dogue de Bordeaux with onions, cat food, too much raw egg, coffee, chocolate, grapes, raisins, mushrooms and macadamia nuts.

However, sometimes other foods can be given like fruits (apple, strawberries, banana and rockmelon), tuna, sardines, brown rice cooked in beef stock, natural yoghurt and cottage cheese.

Dogue de Bordeaux has the gentle and calm temperament. They are courageous, patient, extremely loyal and completely devoted to their family. They are strong and fearless that makes them wonderful watchdogs. They have the ferocious attitude toward intruders. 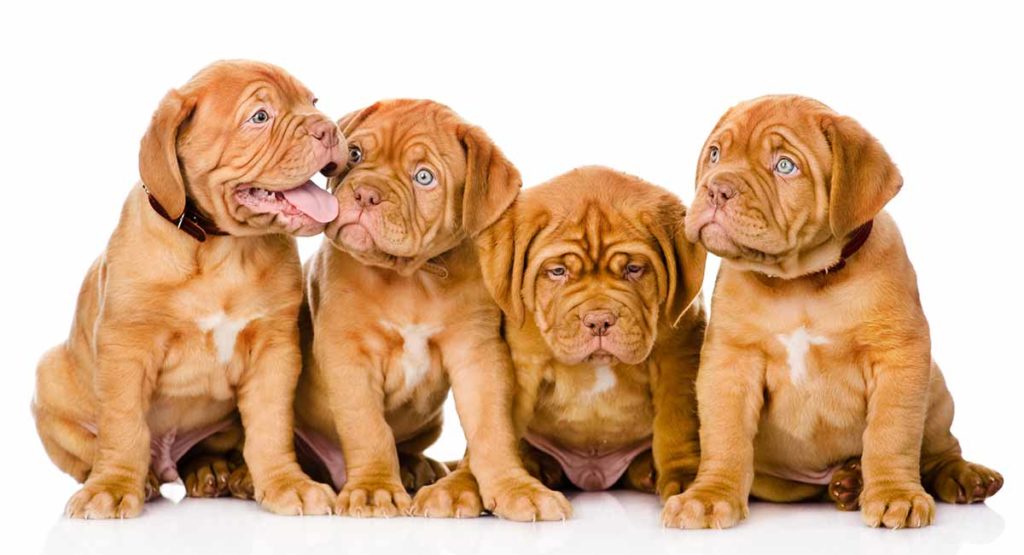 It is powerful dog breed with the muscular body. In spite of being heavy, they are excellent athletic dogs. The distinguishing characteristics are their ferocious and serious expression on their large and broad head. Its head is a little bit rounded which has pronounced median groove.

They have wrinkles and furrows on their faces which are quite prominent and has muscled cheeks. Muzzles are slightly hollowed and powerful under the eyes accompanied by many folds. The top line of muzzle is little turned up with broad nostrils. The Dogue de Bordeaux has broad and powerful jaws but the lower jaw curves in upward direction.

Eyes are quite highlighted on the face and are oval shaped. The colour of eye can vary from dark brown to hazel depending on the colour of the coat. Ears are little darker than the coat and are small. The front edge of the ears touches the cheeks of the dog when they feel excited or sense alert.

Neck is strong and well-muscled with the skin present around it. They have well defined withers along with strong, well-muscled and straight front legs. Back legs are strong and muscular along with well-developed thighs. Curved nails and tight toes make their feet strong.

At the root, tails are strong and this dog breed generally carries them low but the tail is raised when they are alert or excited. Dogue de Bordeaux has shine and short coat which is soft. The skin is thick but loose fitting without many wrinkles and folds. This dog breed has lots of pigmentation and little white is sometimes present on the legs and chest.

The average life expectancy of Dogue de Bordeaux is around 8- 10 years when they are properly cared. 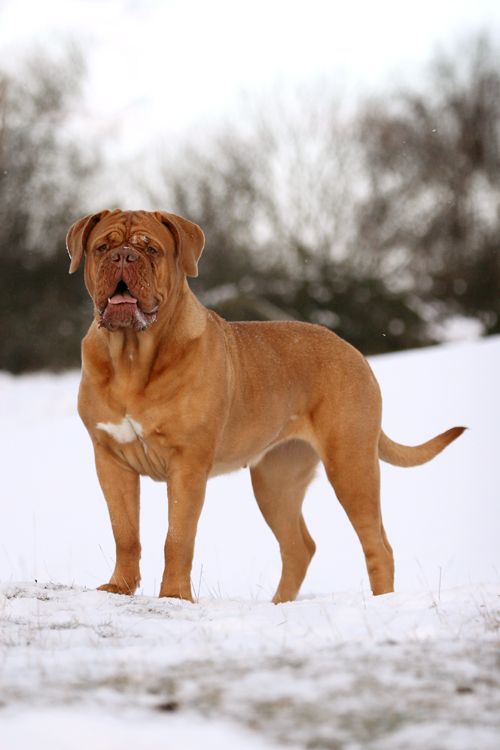 As they have a short coat, the maintenance of coat does not take much time. But, it definitely needs a weekly brush to keep the shedding under control and brushing will ensure that the skin is in good condition. It is necessary for the owner to regularly check the folds and clean them to prevent the dog from any kind of infection and sores. Ears also must be checked regularly and cleaned when it is required to do so.

The puppies are extremely cute and adorable. No one can imagine that such incredible cute pups will grow into such massive strong built dogs. The adult Dogue de Bordeaux is loyal and affectionate creatures that love to be in the family environment and love everyone. However, the males are dominant over females. But the proper socialization training can control their behaviour gently.

This dog breed is little overprotective of their family as they are devoted to them. They are little stubborn and their stubbornness can take them to their arrogant side. They are intelligent. When they get bored, they become quite a destructive character and release their frustration. Lack of training and direction can result in dominant side of this breed which cannot be handled. They drool a lot.