American White Shepherds are very faithful to their owners. If proper training is provided, they can prove to be very good and efficient companions. Also, these dogs are very brave, courageous and they are always eager to learn new things. They also demand the owner’s attention and must not be left alone or isolated for a long duration of time.

Usually this breed is pack oriented which means that they need a pack leader. So, it is very important for the owner to be authoritative, firm and very confident but at the same time be calm and gentle. If the owner unknowingly or knowingly lets the dog believe that he is the pack leader, it may result in aggression in dogs. Also, it is very important to give the dog daily mental and physical exercise. This will help in making the dog more stable.

If American White Shepherd is properly trained from an early age, they become very obedient and adjust very well with children and other pets. American White Shepherd is very active and does not like simply lying around ideally. They are intelligent and smart and so they need to direct their energy. Thus they are usually used as watch dogs, police dogs, and companions to blind and even in search and rescue operations in military. They like many games, such as fetching, fly ball, ring sport and tracking.

Usually American White Shepherds prefer large yards where they can play and run. But can even adjust in apartments if they are properly exercised especially by taking them on long walks or running.

For American White Shepherd, the average litter size, which is the number of puppies they can give birth to, is 5-10 puppies. The puppies tend to grow very fast and proper training is required for them at a very young age to prevent behavioral problems in them. 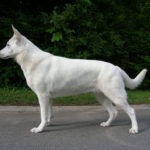 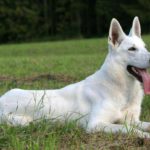 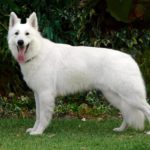 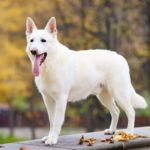 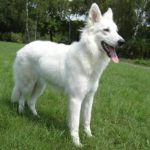 The life expectancy of American White Shepard is 12 years to 14 years if good care is taken.

American White Shepherd is a health breed but still may face some health issues, like hip dysplasia where joints dislocation at hips may take place, elbow dysplasia, degenerative joint disease (osteochondritis), eye diseases, allergies that can be related to food, air or fleas, Mega esophagus (Enlarged Esophagus) and coat or skin related problems. Some genetic lines of American White Shepherd can sometimes even show problems related to diseases that are autoimmune, like congenital spine disease.

As this breed constantly sheds its hair, proper grooming must be done to avoid finding their hair everywhere. Their hair must be regularly brushed and taken care of. Also, frequent baths must be avoided as it can cause skin irritation due to loss of natural skin oil. Apart from these, regular grooming like nail clipping, ear cleaning and dental care must be provided.