The caracal is a wild cat having streamlined body with dramatic marking on its face. The most striking feature of this cat is tufted ears which makes it look different from other cats. The cat uses its tufts to camouflage in jungle and to shoo away flies from its face. It also uses its tuft to communicate with fellow caracal.

Another name for this breed is ‘desert lynx’. The cat comes in solid color generally tan with no stripes or markings on its body. Caracal is known to be the heaviest, fastest and largest of the small cats in Africa. The caracal is one among the 30 species of small cats. It is native to Africa, the Middle East, Central Asia, and India. It is nocturnal and is an agile hunter. They eat almost any animal caught by them.

The jumping ability of the cat is incredible. It seems as if the cat is flying. They are extremely territorial and prefer to lead a solitary life. The male and female caracals meet only for breeding purpose. The ancient saying “to put a cat among the pigeons” comes from this cat. In olden days, it was a contest where the cat was used to hunt pigeons for their master.

This cat population is not at alarming state but in Asia there is major decline in its number. Deforestation and conversion of forest to irrigation land has destroyed the habitat of caracal. Many ranchers and farmers shoot this cat because they tend to attack on livestock for their easy source of food. 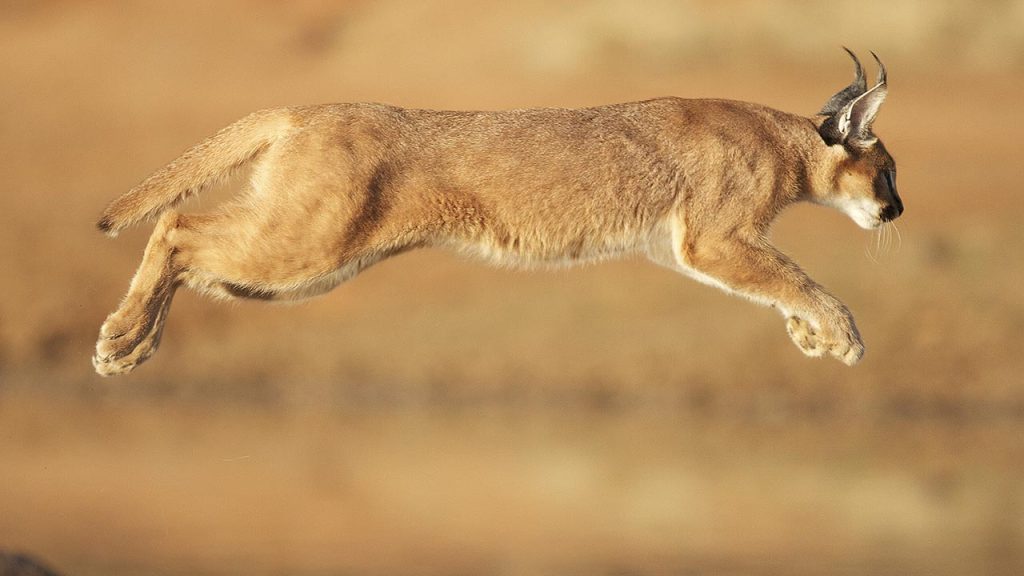 The geographical regions of the cat are Middle East, Southwest Asia, West Africa, South Africa, and Central Africa. The cats live in the woodland and semi dry area. Few cats can be seen in arid mountain evergreen forests. The cat doesn’t inhabit in rain forest. 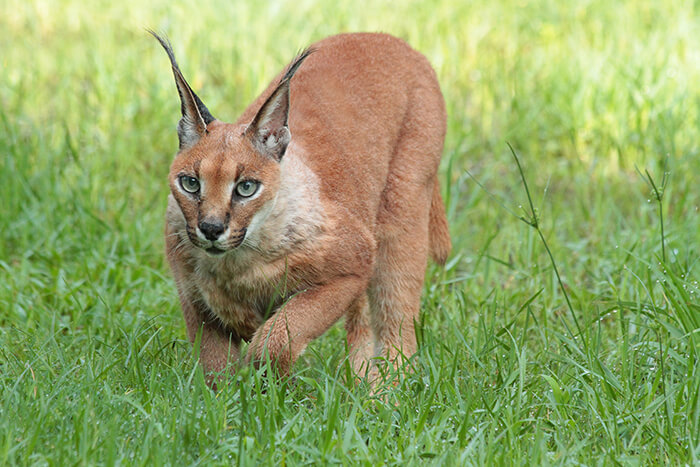 The caracals are strictly carnivorous animal. They feed upon variety of mammals in the wild. Antelope, hyraxes, hares, and rodents are the most common prey of cat. It also preys upon livestock (if available).

Caracals can survive long period of time without water. They fulfill their thirst from the body fluids of their prey. The caracals have incredible hunting skills. They even prey upon birds as they can jump 10ft in the air.

The caracals are food for bigger cats like lions, cheetah and tiger. Human beings consider this animal as threat to their livestock so they kill them as soon as they find caracal near their vicinity. Caracals are also hunted for its skin. Habitat loss is the significant threat to caracals.

The caracals live around 20 years in captivity and up to 17 years in wild.

The caracals are sexually active animals. They reach sexual maturity up to 1 year of age. They mate throughout the whole year. The male and female caracals interact only for mating purpose. The gestation period of female caracal is of 2 months.

It gives birth to almost 2-4 kittens. Kittens are born with their eyes closed and are highly dependent upon mother for their survival. They open their eyes after 10-12 days of birth. Mother nurture its children till 10-11 months after their birth. After that most of the kittens get separated from mother or few tend to live with their mother.

The caracals are solitary animals. The only exception is mother caracal living with its kittens. They patrol their territory strictly and mark it by urinating and by rubbing their claws on trees. This cat has scent gland on its face and between its toes. They use scent to communicate their area.

The caracals are secretive animals. A lot Information about its lifestyle is gathered from the captive cats. They mostly hunt after the sunset. The caracals are agile animals and they chase their prey till 5m after then they leave it. The interaction of one caracal to another is limited.

Caracals are not commonly domesticated because of its wild and aggressive nature. It also raises the legal concern and public safety concern to owners who own this cat. Only professionals who are aware about the characteristics of the cat and zoos own this cat. In earlier days, people of India and Iran own this cat for contest purpose. They use to bet on the caracal of their choice and the cat that kills most of the pigeons becomes the winner.