This dog was developed in Russia to meet the military/working needs of Russian Red Army. Though the name suggests that it is a terrier; it is not a terrier and more than 17 breeds were used in the developing process. Though they are not really cute, their working abilities made them favorite for many.

This breed was developed in the mid twentieth century by Red Army in Red Star Kennel. This breed got recognized by FCI and AKC in 1983 and 2004 respectively. In 1957, they came out of Red Star Kennel and from then onwards, they spread to several parts of the world. Now this breed can also be seen in European Union, America, Canada etc. Other facts may include:

Three to four and half cups of quality food are sufficient for a healthy male dog. It is better to divide food into two to three meals rather than dumping the whole food once. They are more prone to food allergies and be cautious while choosing food items for them.

They are mostly kept in a kennel. This kennel should be well built to provide good shelter to the dog. In some cases you can find them living indoors.

They are very protective and loyal to all the family members. They are playful and always want to be in the company of humans. Taking it to different places like parks, shops etc. will help in increasing its social skills.

It is calm and confident. As it is designed for military purposes, it is very alert and protects the territory well. Its guarding abilities are worth mentioning here and it immediately alerts the owners if it observes any intrusion or suspicious activity. Its fearless and protective nature made it as one of the best guard dogs.

They are very active and a perfect companion for long walks. They love to play in snow and water. Rolling in snow is the favorite time pass for them and they love to splash water all over them. They are highly intelligent and easy to train. They always try to please their master and obey commands willfully.

Strict training practices have to be implemented from initial stages and using harsh punishments are not recommended. They love to grab attention of people all the time. So keeping the dog always in the kennel will make it aggressive. They love to roam in front of people.The breeder or the other family members must keep an eye on them.

Unlike several others dogs they are late bloomers that is, they take time to fully mature. Russians love to call them as “Black Pearls of Russia”.

Although it is a brave dog, it can be attacked by other bigger dogs. Therefore it is advisable to keep them safe within your premises if left alone.

Breeding occurs at quite a late stage as compared to other dogs. When it happens, they give birth to approximately 8-12 puppies.

This dog is heavy built with broad skull and long head. Its nose is large and eyes are dark. Triangular shaped ears and tough, thick pads separate it from several varieties of dogs. Male dogs usually weigh 100 – 143 pounds and their height will be in the range of 64–74cms. Female dogs are less massive and they weigh 80-115 pounds and they stand 64-72cms tall.

Its double coat is the main reason for its comfortable living in chilly winters. Gray hair can be seen in some BRT puppies. The length of the coat is 1.5 to 4 inches and some may even call its coat as wiry and curly. Apart from black, you can’t see other colors in BRTs. Forelegs are well boned and appear straight. Though they are heavy they appear to be lighter on feet. Its shoulders are large, muscular and well built in most of the cases. 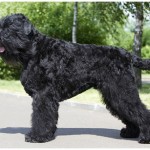 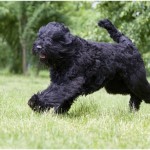 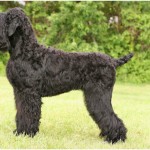 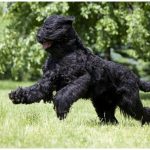 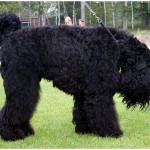 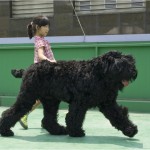 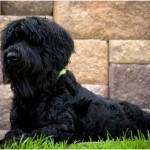 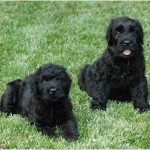 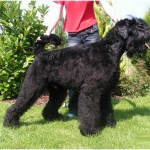 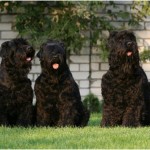 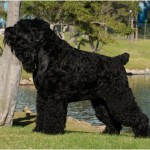 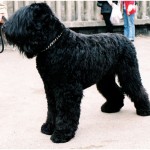 The black Russian terrier lives for approximately 10 years. Some can live up to 14 years of age. This depends on their living conditions.

Hip and elbow dysplasia are commonly seen in these dogs and the breeder needs to take care of fungal infection in the ear surrounding areas. Ectropion and entropion are commonly seen eye related problems and in the minor cases, heart diseases like aortic stenosis and cardiomyopathy can also occur. It is prone to food and contact allergies also.

It is better to comb them regularly or else you will find large hair clumps (occasionally). Brush them twice in a week and trim nails periodically. It is better to take them to professional grooming centers for trimming. Use dedicated dog shampoos for bathing.

This dog sheds rarely. They have the annual shedding twice a year. At this time grooming should be done more often.