Beagle is a medium sized dog belonging to the Hound group. They are extensively used for hunting purpose owing to its tracking capacity and high sense of smell. Nowadays they serve as pets in many homes due to its intelligence and good behavior.

The existence of beagle dogs are reported even before 2000 years and the current breed has its origin from Britain. Like many other hound dogs, this breed has to be trained at early age since they were stubborn.

It is certainly a sociable dog with courage and intelligence. They are fond of children and can easily mingle with other pets in your home.

It is very much essential that you should give him routine exercise and mental activity failing which they tend to become timid.

Take him for daily walk or jogging to keep him engaged physically. They can get anxiety and depression if not given enough exercise. Your pet will be calm and brave if you give him lot of work.

Beagle has innate ability for tracking any kind of interesting smell and some owners would satisfy its anxiety level by playing tracking games using animal scents. Unlike other dogs they will not generally bark instead produce a loud cry which may sound like howl.

They are born curious and will not listen to his master if they are tracking some interesting smell and hence you should be alert while taking him outing.

They tend to develop some behavioral problems like obsessive barking and biting if they are left alone for long time. Lack of proper leadership from his master can invoke such behaviors in these breeds. Average height of male breeds are 13-16 inches and for females it is 12-15 inches and their weight would be anywhere from 9-11 kg.

It is essential that you are not overfeeding beagle. It can become overweight if you are not restricting what he/she eats. Obese dogs will obviously have many health problems. Excess of weight can strongly affect its ligaments and joints and hence you need to control its diet.

Instead of adding on just filler diet you have to choose the food that contains the required nutrients for your beagle. Avoid giving foods that have no nutrients but only calories. It should be given freshly cooked meat at least twice a week.

You can choose from variety of foods like turkey, lamb, lean white chicken, veal or fishes like mackerel and tuna. In addition the diet should also contain fresh vegetables like carrots, potatoes, cauliflower, broccoli and beans. A diet is said to be complete if it contains 30% meat, 30% vegetables and 40% of starch.

Centuries back beagle was used for hunting alone but now it is well suited for living in apartments and houses.

Beagle dogs have an inbuilt instinct for hunting but nowadays it serves as apartment dog in many houses. It loves to explore and run and hence it is for the owner to keep him on the schedule of daily exercise.

It is loving, affectionate and devoted dog to the family and it gets easily attached with children. It becomes very happy to see everyone of the family and hence is highly sociable. It gets bonded with other dogs also, but do not treat it like non canine pets in your house.

Beagle has its own mind and thinking and you as the owner should be his leader providing him plenty of physical as well as mental exercise daily. It makes a peculiar noise which is similar to howl and it is capable of rotating its tongue which may sound like talking.

Make sure that you are leashing the dog whenever you go for a walk since it may not listen to you if he smells anything strange. You can make use of animal scents for playing tracking game for satisfying his instinct.

Females/males should have completed at least 2 years and must have had heat cycle before for breeding. It is better if the weight of the female dogs is greater than the males. They can be involved in breeding session until she becomes 7 years if there are no other health issues. Get him/her tested medically to ensure that it does not have any genetic problems.

Normal gestational period for dogs (of any breed) is 63 days from the date of conception. A healthy female beagle can give up to 6 puppies in one delivery. You can make sure that she is ready for labor when her body temperature goes below 100F.

Make arrangements for the right environment like trash bags, towels, plenty of newspapers and other materials when she gets ready. Most of the breeds will deliver puppies without any complication. In case you do not want her to breed anymore you can get it sprayed.

Beagle is a hound dog looking very much like that of Foxhound. It has square shaped body with long head, with straight muzzle of medium length. It has large brown eyes that are positioned well.

Its ears are long and low set and its black nose gives him the intense smelling sense. Its legs are short when compared with the section of his body.

Its body is muscular and is covered with rough coat. You can see the tail held upright whenever he stays active and like many other dogs the tail does not gets curled back. Beagle dogs are seen in wide range of colors like lemon, black, tan, red with white, and lemon white. It makes a distinctive howl when he is actively engaged on hunting.

You should start brushing and grooming him/her when it is still young so that it enjoys the activity thoroughly. You can give her rewards for allowing you to clean her feet, ears and muzzle.

Beagle starts shedding mostly during spring. Its outer coat is very coarse unlike its soft inner coat. Actually the process of shedding happens continuously and replacement of old fur by new one occurs as a process.

Environment and genetics play important role in shedding. During the months of winter the coat will become thicker than before to give warmth to the dog. Daily brushing can help you to minimize the shedding process.

Beagle is essentially a pack dog enjoying both human company and other pets in your home. You cannot just leave him alone until he is mature enough to handle the situation. Boredom can easily affect him and he would feel panic and scared of being left alone without any company around.

Separation anxiety in dogs can create lot of unwanted destructive behavior like excess of barking and chewing and even biting. Hence make sure that somebody (from your family or pets) is/are present in your house for avoiding this problem.

Beagles can become overweight if not maintained proper diet. It can get other health issues like epilepsy, ear infection, hip dysplasia, and cerebrellar cortical degeneration. Beagles are prone to get retinal atrophy, glaucoma and corneal problems. 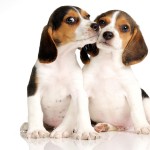 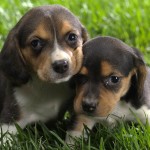 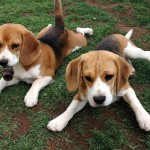 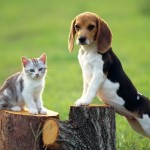 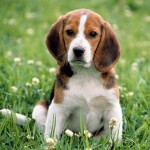 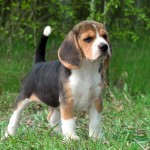 The lifespan of a healthy beagle would be from 12-15 years.

Beagle : At a Glance 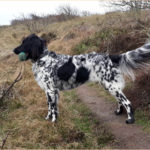 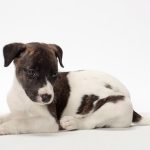