The French Beagle-Harrier or simply the Beagle-Harrier is a dog breed with its origin in France. The origins of the breed have not been properly documented. The word around is that either the breed was result of crossing Beagles and Harriers or the breed has a common ancestral lineage with the distinct Beagle and Harrier breed in some Southern Hound now supposed to be extinct.

The breed belongs to the category of scent hounds and was developed primarily for tracking prey and hunting. The dog is in incense a magnified Beagle or a compressed Harrier in appearance with most of its personality traits similar to them. The breed is now quite rarely spotted even in its native home.

Beagle-Harrier Facts For Kids and Information

The dogs require a regular diet, but attention must be paid to portioning to prevent them from overeating. The breed will devour anything that it finds. Their keen sense of smell is an accomplice to their raiding any source of food they can find.

The Beagle-Harrier is an animated breed and is lively and energetic. Being a hunter, it is used to open spaces and fields. The dog is bubbly and lively and likes to play around. To keep tabs on its energy it must have access to an area where it can express itself.

The breed has a super sensitive smell and may get lost while investigating new scents. It is best if the breed is in an enclosed area. The breed is loud and vocal and howls often. It may be a nuisance in apartments and may irritate neighbors. Houses with an attached yards or nearby dog parks are ideal for the breed.

With a high stamina and energy to run around all day, the Beagle-Harrier requires a very active lifestyle. The exuberance of the dog must be channelized in the form of exercises in order to curb destructive tendencies. The dogs are extremely attached to their families and don’t do well if left on their own.

They are ideally suited in an environment where they can always have a companion. A couple of hours of playtime on a regular basis can ensure that the dog’s exercise needs are met and they stay calm and behave well indoors.

The dogs are also prone to over eating and obesity and they need an active lifestyle to avoid the same. The Beagle-Harrier breed is ideally suited to someone who himself is devoted to exercise and fitness.

Since centuries, the Beagle-Harrier has been used to hunt in packs. Their highly developed sense smell allowed them to track and target both smaller as well as larger prey.

The dog has a natural predator instinct especially towards small animals. The dog will set off at the first whim of foreign scent of an animal. The dog if socialized from an early age with the other animals in the household, will leave them alone.

They are a pack animal and will easily blend in with other dogs and animals they are raised with. The dogs actually are pretty passive as compared to other breeds. They are gleefully fond of strangers and will welcome them warmly.

The ancient lineage of the dog is not well-established but the dog was primarily bred for hunting small and large prey in packs. In today’s modern world the Beagle-Harrier is very rare and its breeding is not that popular.

Its resemblance to the Beagle and the Harrier and lack of a visible distinction play a factor in the same. It belongs to the scent hound family and the litter size of a female is 3 to 8 puppies.

The Beagle-Harrier is found to have the physical traits of both a Beagle and a Harrier. It is medium to large sized dog with a muscular build. The body structure is well proportionate. The head is broad with an elongated yet not unsightly muzzle for its superior scenting power.

The ears are medium sized and droopy and the eyes are dark colored. The tail is long and upright. It has a short to medium length coat which is thick and shiny. The coat is compulsorily tricolored with white, black and grey being the base colors and the third being some shade of fawn, brown or tan.

If a strict check is kept on the Beagle-Harrier’s diet and a healthy lifestyle with regular exercise is maintained, the dog may live up to 12 to 13 years.

The dog is considered to be generally healthy but is prone to various genetic diseases. Hip dysplasia, though rare, is one of the conditions that may affect the breed. Besides this, various eye diseases are also seen in the Beagle-Harrier.

The dog’s ears are also prone to infection and its unhealthy eating habits can cause obesity. While adopting a pup, ensuring a certified lineage free from genetic diseases may be helpful. Timely visits to vets to checkup on dog’s help can help identify disease early.

The Beagle-Harrier breed is a low maintenance one. Regular brushing is all they need. In the shedding season, frequent brushing will be required.

The breed has droopy ears that will require regular cleaning from a young age to prevent infections. Bathe the dog only when dirty. These dogs are ideal for people who are looking for pets having minimal grooming needs.

The dog breed is prone to seasonal shedding. They will require regular brushing during that time but their coat being short is not that big of a nuisance. 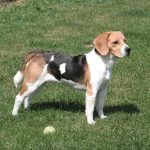 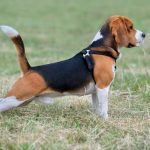 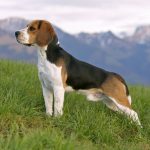 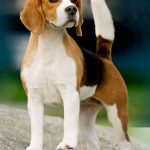 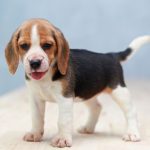 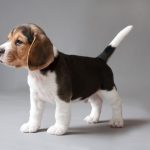 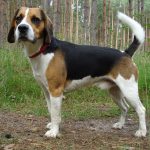 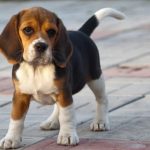 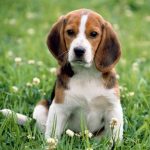 The cool and calm temperament of Beagle-Harrier doesn’t relay in any way the fact that the breed was used to hunt. The breed is extremely devoted to and fond of its family, especially children. Proper socialization from an early age can limit the exuberance of the dog and ensure a calm and gentle behavior around children.

The breed takes very well to meeting new people and dogs. It will greet both friends and strangers alike and hence makes very poor guardians. The breed is used to other dogs as it traditionally hunted in packs and having other dog companions is a boon for the Beagle-Harrier breed.

The Beagle-Harrier though gentle and friendly, can be stubborn and challenging to train. If the dog puts its mind to do or not do something, it is almost impossible to distract it, especially it if it gets a whim of a strange scent.

The earlier the dog is introduced to reward based training the easier they will be to tackle. Leash should also be introduced in early age. Patience and persistence is required when training them.