Bears are big mammals found in almost all places of the planet and they are nocturnal (active in night) in nature. They are like dogs with innate sense of smell and hearing. Bears can run with great speed and they are good in climbing trees.

There are several species of bear but many of them are becoming extinct now. Bears vary in height and some are very short like the sun bear (below 4 feet) and some of them can grow up to 11 feet height (polar bears). They can swim and smell nicely and unlike popular misconception they can climb trees as well. They are courageous and rigid and extensively found in forests and mountain. Polar bear is one of the rare varieties of animals that can withstand heavy snow. They live alone normally and are seen with fellows only during breeding season.

Average weight of a healthy adult bear is 350 Kg and its weight depends on the breed variety and growth rate. Brown bears can grow as tall as 8 feet but there are bears like Malaysian sun bear that are smaller than 1 foot and polar bears can grow up to 4-5 feet taller. Bears have special trait of adapting itself to the environment it lives. Changing seasons will not affect them in any manner.

They have the tendency to consume large volumes of food during summer so that it builds up more of body fat which is enough to keep them with energy during winter months when the availability of food is less. Another interesting fact about bears is they hibernate during the winter months. Hibernation is the period of sleep for many animals to conserve energy. They can survive hibernating for many months continuously without eating anything. They do not even pass feces during that time.

Bears can eat up to 40 Kg of food varieties each day which adds roughly one kilogram of weight each day. Grizzlies can live on only fruit leaves, nuts, and roots and even on insects. Technically speaking all bears are carnivores but some of them are omnivores eating plants as well as animals. Bears spend good time on searching for good environment and checking on the availability of food like vegetables, crops, insects and fishes. Plants are the major diet for bears and about 80-90% of their diet are only plants. Bears love to eat fishes and meat of other animals like deer, elk and moose.

During spring season when they come out of their sleep they are very much hungry, but there will not be any leaves on the trees. At that time they depend on grass vegetation on the slopes and sometimes they feed on deer that has died due to winter. They would love to eat cabbage with their roots and also on salmon that has perished due to winter. Most of the species tend to lose weight during winter and spring or until the arrival of summer in June.

At the time of fall most of the grizzly bears pass into the process of hyperphagia. By this method they do as much packing of fat in their body as they can to keep them on survival during the hibernation period of the entire winter months. Food supply will be scarce owing to heavy frost and coastal bears will depend on fishes. For most of the species of bears November to January is the period of hibernation except for few bears that live on warm climatic zones.

Black bears and grizzlies are found in many parts of the world wherever vegetation is rich. You can spot them in dense forests with variety of fruit trees, lowlands, slopes, and rarely on farm areas. They are often seen visiting streams and ponds in search of water. Bears prefer to live in areas where there are plenty of food resources like nut growing trees and fruit varieties. They have the nature for providing shelter on the tree furrow for its cubs until they grow up.

Grizzlies are extensively found on Europe, Asia, and on the Arctic grounds. They are also seen on the tundra plains, grasslands, temperate forests, and prairie lands of British Columbia and Alaska. Like many other mammals, bears will not maintain specific boundaries. Depending on the availability of food they keep on changing its home from one area to another. Many bears are found occupying the home range of other fellow bears without disturbing them. Males have larger areas of boundaries than females. There are male black bears that occupy hundreds of KM in its zone which is lower than its female counterpart.

Bears are more intelligent than apes and are highly social. They have the tendency to share friendship and resources and maintain good relationship with their species. Their behavior can be predicted and they are gentle with other animals generally. Mother bears have the innate nature to nurture the young ones and they are attentive in protecting them. Bears are also playful and have unique personality like humans. They take time to decide the animals/humans they meet. Bears use intense smelling capacity to judge the world around them.

It is believed that a bear has more than 100 times of nasal mucosa than man. They have the ability of sharing any information through airborne scent. They can hear even high pitched voices which exceeds that of human frequency multiple times. Bears can run with great speed covering 30-40 miles per hour but unlike horses they cannot cover long distances by running. Research indicates that bears are self controlled and disciplined and generally do not harm other animals. They become violent only they are hungry. They are shy mammals and not ferocious as portrayed in movies.

Bears maintain their own space and become aggressive when other animals/humans enter into their space. They are excellent climbers (except grizzlies) and can climb up to any height when being faced by threat. Bears are curious animals and can gather more information of smell while standing on their hind legs. They follow a hierarchy putting male adults on the top position, followed by sub-adults and other females. Bears have the ability to tolerate humans unlike wolves or lions and will accustom with them if they are getting a favorable environment with plenty of food resources.

Bears are considered as one of the least reproductive mammals. Bears become sexually mature when they are 3 years and they are found alone unless in breeding season. Here old and big males win the competition of having sex with females and young adult males do not get a chance for mating. Both males and females have multiple sex partners.

Mating takes place when the conditions are favorable (May-July). Young ones are produced in January and February. A healthy female bear can produce up to 3-4 cubs in one pregnancy. Cubs are born blind and weigh almost 10 times as human babies. They continue to be under the protective care of the mother and survive on milk alone till they become mature to develop teeth. Often these cubs remain under the surveillance of the mother until they are 2-3 years old and are capable of searching food on its own.

Usually male and female bears would communicate well before mating takes place. Females stay on heat for many weeks but allow a male to mount her only if she is very receptive. During mating period both of them stay together for few days mating repeatedly. The act of copulation would last for 20-30 minutes but it stays locked up for hours together.

Bears are large animals with a strong body and protective fur all over its body. They have a short tail, rounded ears, sharp and small eyes. Black bears have different shades of black and some of them have eyebrow patches. Grizzlies have large muscle mass on its back and have massive forelegs. Polar bears are very tall and have large body with well built structure.

Bears are species that are regarded as endangered species in animal kingdom. They are hunted by human beings largely. Many cubs are being killed and eaten by wolves and wildcats and hence most of them could not survive until they become mature and grow into an adult. 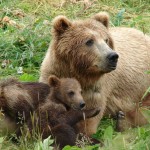 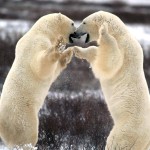 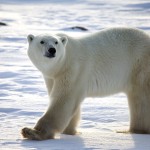 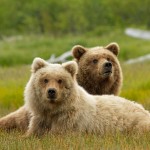 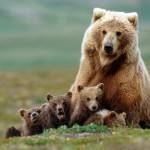 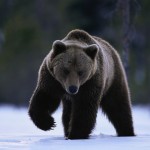 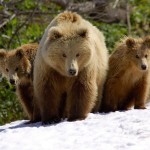 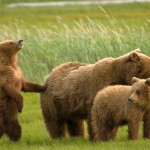 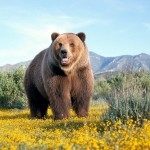 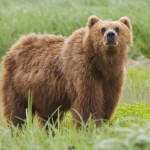 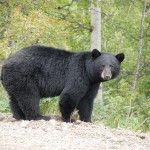 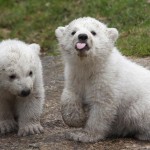 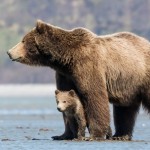 Bears can live up to 35 years if not hunted by its enemies.

Bears: At a Glance