The grizzly is an awesome, feared yet admirable animal. It has been acclaimed as the second largest carnivore in North America. This sub-species of the brown bear is a huge animal that can weigh between 300 and 800 pounds. Some captured ones have been found to weigh as much as 1400 pounds. They can reach up to a height of 8 feet by standing on their hind feet. The grizzly has an average length of 1.8 meters from the tip of the nose to the tip of the tail

Grizzlies have their origin in Europe and the Asian Continent. Presently they are found in North America and Canada. They can be found in woodlands and forests and also valleys near rivers. They are commonly referred to as:

Though sometimes called a carnivorous animal, the grizzly is omnivorous because it eats flesh and vegetables.

During the period preceding hibernation, for about 2 to 4 months, grizzlies enter a period of multiplying calorie intake in preparation for hibernation. They can eat up to 25 fishes daily and gain as much as 3 pounds of fat each day to act as food reserves during hibernation.

They can hibernate for 5 to 8 months annually. They eat less and survive on fat reserves accumulated before hibernation. The heart rate and breathing process are slowed down during hibernation and the metabolic processes are also slowed. Grizzlies can wake up any time during hibernation.

Though previously grizzly bears populated the whole range from Alaska to Mexico and Canada to Ohio, the population has shrank from nearly 50,000 in North America to about 1,800 today.  Grizzlies are now found in:

Famous Places Where You Can Find Grizzlies :

Grizzlies can be found in Glacier National Park and Yellowstone National park in larger numbers.

Did you know that the only predators of grizzlies are the humans?

Grizzlies were massively hunted down in the 1970s and 1980s which greatly depleted their population. Nowadays they are protected by law, therefore hunting grizzlies is illegal. This has contributed to a gradual rise in their population. They have multiplied and moved from endangered species to threatened one, thus making them less vulnerable to being extinct.

Grizzlies take a considerably long time to reproduce. The onset of the grizzlies’ reproduction commences when they are 4 to 5 years old.

Their mating season is between late spring and beginning of summer, which is from early May to mid-July. Females usually begin hibernation when they are pregnant. Interestingly, females delay implanting the egg into the uterus till October or November. Just before end of hibernation, the female will cub.

The gestation period lasts between 180 to 270 days. Cubs will continue to be nurtured by the mother till they are 2 to 4 years old. Like many mothers with cubs in the wild, mother bear is very protective of her cubs. She can tear to pieces anyone or anything that comes close to her cubs.

Grizzlies give birth between 1 and 4 cubs. On average, each female reproduces 2 to 3 cubs. 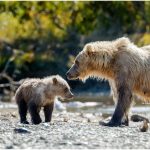 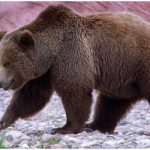 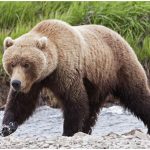 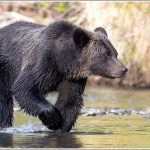 The legendary grizzly is famous for its running speed and agility in swimming, which are surprising considering that it walks in a lumbering manner and it is huge. A grizzly can combine its height, weight, immense strength, speed and superior senses to protect itself. Rising to a full 8 feet on its hind legs and growling, they can easily attack humans in their territories.

As civilized humans, we should show our superiority by caring for the environment and the flora and fauna we have been endowed with. Let us promote the growth of grizzly bears.