Bengal cat is characterized with its vivid spots and distinctive marbling. It is a large sized cat and looks like a wild one but in reality is affectionate and inquisitive. Bengal cat has the pride of having rosettes that resembles the markings of leopards. She wants to be busy all the time and sometimes it can be a challenging task for the master to manager her activity.

Bengal cat is highly intelligent, confident and active. They get along with other pets and can be your best companion. They are talkative and friendly and can be fun to live with. Being alert, they will not let any other beings inside your home. They can be easily trained to play games like fetching and can master the art of tricks in no time.

They love playing in water and make sure that your fishes are safe in the aquarium or pond. They want to be active and energetic and it is for you to keep them engaged with puzzle toys and other challenging games when no companion is available. Bengal cat is not meant for you if you are seeking for soft quiet ones that don’t leave the floor. They like to sit on your lap only on few occasions and most of the time they are active and involved in chasing and playing and investigating. For people who love to have dynamic and cautious companion, Bengal cat can be the perfect choice.

Bengal cat possess luxurious soft coat with vivid spots on them. They are muscular and athletic in appearance due to their playful nature. Some of them are noted with sparkling coat that gives them added elegance. They have wedge shaped head more of length than wide with medium sized ears on the sides. Their eyes are round to oval in shape and the face is followed by lengthy muscular neck. It has medium sized legs and the front legs are slightly smaller in size than back legs. Bengal cat has a thick tail tapering at its end and it is very interesting to note its colored spots on the stomach when it rolls over.

Bengal cat has a thick coat covering its body which has silky texture. The color of its coat varies from dark brown, black to silver tabby. It has either vivid spots on the coat or marked with horizontal lines or marbled. Some of these cats have striped pattern of lines and most of them have glittery skin. The size of the spots can be small or medium and some cats bear the spots that resemble jaguars or leopards. Some cats are known to have “bull’s eye” pattern of spots on their coat giving special appearance.

The world’s first Bengal cat was first born in 1963 when Jean Mill, a regular breeder from California crossed the Asian leopard cat with a domestic cat. It was the first of its kind of spotted cat which was a hybrid offspring weighing 5 pounds. It had the striking look of leopard and jaguar having vivid spots on its skin.

Modern times of Bengal cat was first bred in 1980 which had the Asian leopard cat ancestry. These cats participated in TICA competition and went on to the extent of reaching the championship in 1991. This type of cross breeding was promoted by enthusiastic breeders and that was how the modern domestic cat had rich pattern of vivid spots on its coat resembling a jungle cat.

Generally Bengal cats are healthy owing to its continued activity and energy level. However they can become weak due to nervous problems like distal neuropathy. Most of the time, it would recover fully from this trauma but some cats can get the same health issue again after few years.

In rare occasions, Bengal cats can develop flat chest kitten syndrome which can cause developmental deformity in them. Similarly some cats are prone to develop heart problems like cardiomyopathy and hip dysplasia. Another disorder called patellar luxation can be passed on to the offspring by the parents that can lead to dislocation of kneecap. 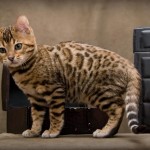 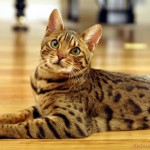 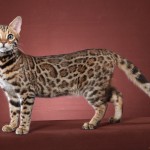 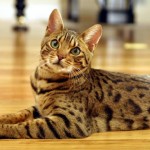 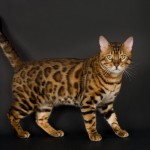 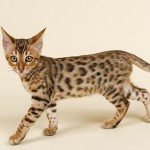 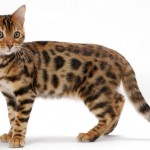 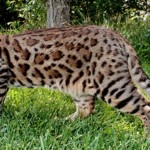 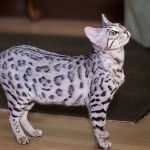 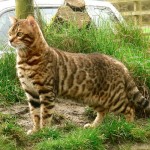 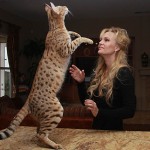 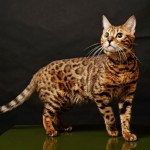 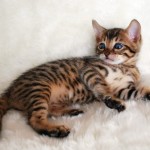 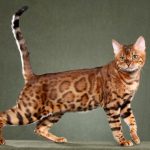 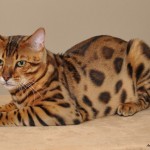 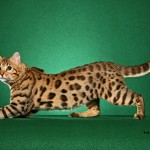 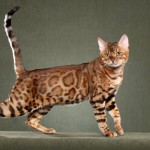 It is enough if you comb the thick coat of the cat once in a week. Ensure that it does not contain dead hair inside. Regular bathing is not necessary for Bengal cats but it enjoys water and may like to bathe with you. You can prevent any dental diseases by brushing its teeth regularly. You can clean its eyes using soft dampened tissue to remove dirt and debris. Ears can be cleaned using soft cotton ball to prevent any infection.

It is wise to keep its litter box clean and spot-free daily failing which they may drop at other places in the house. Keep them busy by arranging for indoor games and cat sized tree for jumping and playing.

Bengal cats can become your companion if you have children and big family with other pets. They like to play fetch and are smart enough to learn tricks. They need the care and affection from your children at home and demands to be treated with respect. It loves small children who can play all the time with enthusiasm to keep him occupied. It can mingle with cat friendly dogs if trained properly and they can stay as happy friends forever. Even other pets can be introduced slowly to mingle with them in controlled manner.