Bambino is a breed which was created when Sphynx was crossed with Munchkin. The cat has short legs, upright ears and it does not have any hair but, in some of the rare cases these cats have fur.

The cat looks more like a kitten; it has short legs which are inherited by one of its parents Munchkin and has upright ears. Their skin is white or pink like Sphynx. Since they do not have fur they cannot absorb the natural oils and hence need to be groomed and cleansed on a regular basis.

The first litter of Bambino was registered in the year 2005. It was just an experimental breed. Bambino is an Italian word which means baby. As the cat does not have fur and has short hair it looks like a kitten.

It has short legs that was inherited by the Munchkin and has huge upright ears. Their skin is pink or white which they inherit from the Sphynx. They do not have fur to absorb the natural oils and hence they need to be cleaned regularly with water and mild shampoo. Since they are hairless they are very susceptible to skin injury, strong sunshine and cold.

They have wrinkled hairless appearance and short legs that are their two most distinctive features. They found to be coated and can be termed as a “coated bambino.” Their back legs are slightly longer than their front legs. Their body is medium to long and they have a broad chest and a rounded abdomen. Some of their species have a “lion tail” and a puff on the tail tip. Their head is a modified wedge and they have rounded lines which are slightly longer and wider.

Their whisker pads and the cheekbones are very distinct. The whiskers are short and sparse and the chin is firm. Their eyes are wide spaced, rounded and large. They have large upright ears that are neither too high nor too low. They weigh about 5-9 pounds and their size and physical qualities are not impediments to their movements. They have a long, slender and flexible tail that tapers from the base to a tip which is pointed. They have big and prominent eyes.

It is a new breed of felines. The notable cat breeders Pat Osborne and Stephanie created them in US in 2000s. They wanted to create a dwarf and hairless species so they crossed Munchkin and Sphinx. By the mid of 2000s they created short-legged feline which was completely hairless. It is a rare cat. Though it was created in the United States, it has an Italian name: Bambino, which means a baby.

They are affectionate, intelligent and friendly. They like to be loved and get cozy in your lap. It gets along well with the pets and family members. Travelling should not be an issue with the breed. These cats are co-operative and can be taught easily. They are adaptable to the environment.

Some of these species are hairless and some are covered with short and fine down furs. They have prominently wrinkled skin that need to be taken care of meticulously. They do not have fur to naturally absorb the oils produced by the skin of the pet.

The cat needs a gentle bathe regularly. You need warm water and mild soap for that. You also need to take care of any debris build up around nails, ears, eyes etc. and clean these areas carefully with damp cotton.

They are very well-mannered with other pets. They are good natured and very patient with children. They are a very good companion and an excellent choice for those who love to spent their time with pets. They are not suited for playing outdoor games however because they lack fur and their skin is very sensitive to the temperature.

The breed is somewhat tough and resistant to a large number of diseases. They have an average life-span of 13 years and they are vulnerable to all the common ailments that feline commonly show. They are very susceptible to pectus excavatum and lordosis.

Like the other hairless felines they are also susceptible to heat strokes, hyperthermia and skin cancer etc. They may suffer from genetic issues also. They are not hypo-allergenic and they produce dander though lesser than the other breeds. 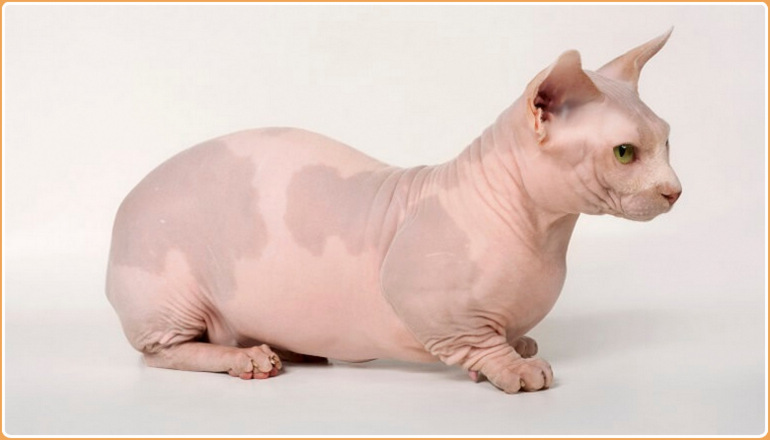 Important Traits Of The Breed

These little felines are known for their outgoing nature, they are high-spirited and mischievous. They are happy to play all around the house, jumping and running. They are highly interactive and just love to play with a plenty of toys.

They are energetic and you can use their energy in a positive way. They are adorable and can prove to be wonderful friend. They enjoy interacting with other human beings and expect a lot of attention. They love to snuggle in your lap and want to get treated with kindness.