It is a bull breed and an exaggerated bulldog with a very broad, well-developed head. They resemble the early bulldogs based on England. They are large in size and have a muscular body with a big square face. They are famous for their glass or marble eyes with a combination of brown and blue colors.

It is the result of a breeding program done over the course of three generations in Georgia, USA. Their ancestors are Buck Lane’s dog with the name Otto. In the earlier days, they only needed one of these bulldogs to guard their work.

Thus, the breeding program was started in 1800s when they realized that this breed was vanishing. The program was called plantation dog program. It was bred mainly for security and companionship purposes. 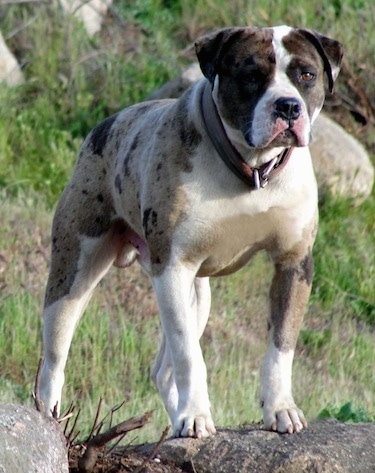 The colors that Alapaha Blue Bulldog are generally found in are brown, a combination of chocolate brown and white, blue merle, red merle or brown merle.

The coat of the Alapaha Blu Blood Bulldog generally is close, short and glossy. However, it is hard and may be found stiff while touching it.

The breed group of Alapaha Blue Blood Bulldog is Mastiff.

Alapaha should be kept by someone who is experienced in housing and petting dogs as he is a very, intelligent and strong breed of dog and needs someone who can lead and guide him without using force.

It can do well in an apartment setting only if given regular exercising opportunities. They don’t feel energized indoor and may seem inactive but they are best when kept outdoors in an average-sized fence.

The average lifespan of Alapaha Blu Blood Bulldog is approximately between 12 and 15 years. 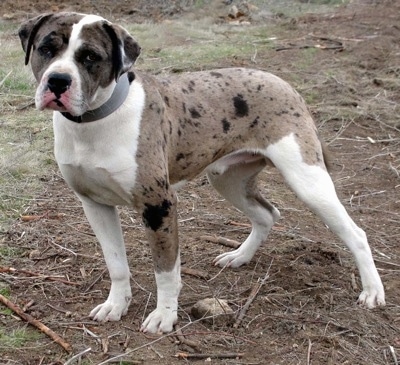 Alapaha Blur Blood Bulldog looks like a very powerful, medium-sized and athletic breed of dog. Its movement is graceful which goes well with its size and weight. It has a box-shaped head, which is fairly medium is size and has large muscular cheeks. The upper part of its skull is flat. The eyes of this dog are also medium in size. White dogs normally have black eye rims however, if it has pink eye rims, it is considered to be a cosmetic fault.

Moreover, it has full lips and the muzzle is broad with a strong jaw. It usually has either V-shaped or folded ears. When alert, the edge of their ear comes at the level of the eye. They have medium length neck, which is slightly arched. It has a somewhat square overall shape, which also helps in giving it a powerful and strong appearance.

Alapaha Blue Blood Bulldog has basically emerged as a cross-breed of the once popular Old English Bulldog (which is now extinct) and a local breed, like Black Mouth Cur and/or Catahoula Leopard Dog. This breeding happened across the southern enclaves of the USA. It was initially used for protection and catching of wild animals and later it was used as an all-rounder also for guarding, patrolling and working.

It has existed in the southern part of the US for as long as 200 years. However, there was no reference given to this breed of dog until 1979.

Alapaha Blur Blood Bulldog has a tendency to develop some health problems. These include congenital deafness and hip dysplasia like any other dog breed. It is also prone to having eye problems where eyelids open inwardly; this is also called entroption. Also, they are likely to get some sorts of skin problems. Therefore, it is important to get it medically checked every now and then.

Because of their stiff and glossy coat, they require little grooming, which is a plus. You only need to brush it once a week so that it removes all the wasted and dead hair off their bodies. This practice also helps in minimizing shedding.

They are average shedders and also should be bathed only when it is required. Moreover, no docking is required on their tail, which should be maintained natural.

Alapaha Blue Blood Bulldogs have great temperaments and are one of the breeds that are very loving and affectionate with families and children. They are very efficient for the purpose of guarding and companionship.

Moreover, they are very athletic, a trait which proves their muscularity. They can be easily trained and are very protective to the extent that they will give their life only to protect its owners and their children. They are also very mindful and so they need to be told that you are the leader and they come after you and thus, they should be the one obeying your commands.

Alapaha Blue Blood Bulldogs are very easy to train. They should be trained when very young in a positive-reinforcement manner instead of showing aggression. They should be socialized a lot in this tender age so they can get along with other packs well.

They should not be kept indoor as they are very active and athletic in nature and so should be trained in an open environment where they would be able to learn well.