Bulldog is one of the oldest dog breeds that have an average size body. They have a very unique wrinkled face and are very muscular. A bulldog weighs a lot and can be pretty chubby. They are considered as one of the best pet dog who loves small kids. They are pretty slow in nature and a short in stature. This is one of those breeds on whom you wouldn’t have to waste a lot of time. Bulldog can be a perfect family dog and are very safe around kids.

This breed of dog was named bulldog because of their connection with bull baiting. In early days these breed was used to bait bears and bulls. Because of their small stature and courageous nature, in bull baiting they were trained to slowly creep as close to the bull or bear as possible and then dart out and try to bite the nose of the bull or bear.

The dog that successfully bit the animal and pin it to the ground was adjudged as the winner. In early to mid 17th century bulldogs were also used catch any bull that entered the city of New York.

Since bulldog are not very active over feeding can be very dangerous for them. An obese dog would mean a lot danger especially considering their breathing difficulties. Daily food intake of your dog would depend upon its size. They are never full and can consume anything to everything so special care must be taken to limit food intake.

Bulldogs can be very sensitive and require proper habitat to survive. They find it difficult with the heat and need a cool place to survive. Bulldogs also sweat a lot and they should be kept dry. Usually a dog panting is useful to cool them but with bulldog their nasal cavity are very small so it gets difficult to them to cool themselves. It is also seen that bulldogs are not very comfortable in extreme cold places.

Behavior wise bull dog are very well mannered as they would seem to give no interest to what is happening around them. They are a very loyal and friendly companion. Bulldog is probably the safest breeds to have in a house full of children’s. Though bulldog won’t play with them a lot but they won’t even by mistake cause any harm to a child.

Over the years breeders have successfully reduced aggression of bulldog to a greater extent. They usually get very attached with their house and never ever even think of leaving the premises without any supervision. They are very lazy and would prefer to have a nap instead of running around the yard chasing a ball.

They require a very comfortable lifestyle and don’t like to work hard a lot usually they are sleeping in a corner of the room. They don’t like to play a lot. Bulldogs would only and only learn something when they want to. They can be very stubborn if something against their will is ordered. Because of their laid back nature they are not the best choices if you want a trained dog.

Twice every year a female bulldog is available for mating. After mating they require about 2 to 3 mints for the puppies to come out. At a time 4-6 puppies can be given birth.

Bulldogs are very calm by nature and they don’t like attacking other animals. They are not predators and usually bond well with other animals.

Breeding of bulldogs is not very easy. During their pregnant days they can be very moody. Lots of attention must be paid to the female dogs when they are pregnant and regular checkup must be ensured. Their diets should also be taken care of and proper calcium and mineral supplements should be started. Usually bulldogs give birth to the little ones through caesarian method, as it is very difficult to get big heads of puppies out from birth canals.

The most important characteristic of bulldog is their big wide head. They have a hanging skin on their cheeks and under the neck. There is also a thick folded skin on bulldog’s eyebrow and on their nose. Eyes are wide and big. Lips are dropping and usually teeth of a bulldog are pointed upwards.

A full grown up bulldog weighs around 35 to 50 pounds. If height is to be looked at, then they are pretty short with maximum height of about 1 foot. Coat color is very radiant and pure. Coat of the dog is of very delicate and smooth textured with flat and short hairs.

Average lifespan of bulldog is of 12 to 16 years.

Lots of care should be taken of a Bulldog. They require some sorts of exercise to ensure that they don’t turn over weight. They also are very sensitive to heat and require proper ventilation and air conditioning especially in hot places is must. Since bulldog are not very active over feeding can be very dangerous for them.

An obese dog would mean a lot danger especially considering their breathing difficulties. Daily food intake of your dog would depend upon its size. 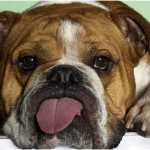 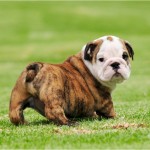 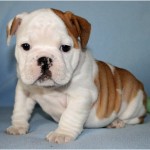 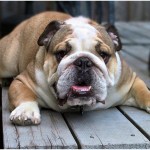 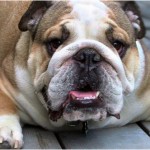 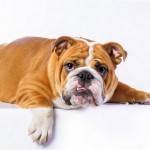 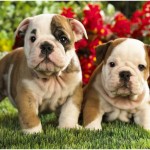 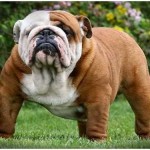 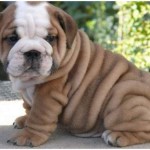 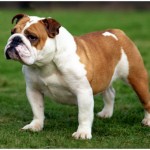 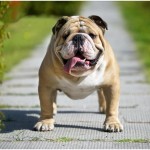 As mentioned earlier bulldog is a very lazy breed and all they do is sleep around for the whole day. They hate to run and can spend a whole day in the house. But to make sure that they are fit and healthy it is a very good practice to at least walk them once every day.

A 15 minute walk daily will make sure that they never get obese. Grooming is very necessary for bulldog as they have a lot of tendency to shed their coat. If not groomed regularly then they may contaminate the house. Coat enriching shampoos are very necessary.

Shedding is not a lot of problem for bulldog they don’t shed their coat a lot. Yet it is advised that a good coat enriching shampoo is used. 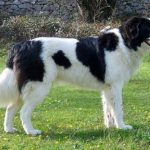 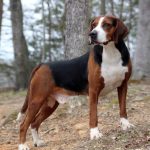