Dogo Argentino is an Argentinian dog breed with a large, muscular and well-built body. Its coat is white and short, and is deprived of any markings. It was traditionally bred for hunting big animals. Antonio Nores Martínez, the dog’s breeder, wanted a dog that was both a hunter as well as a family dog. In late 1920s, he started breeding the Cordoba Fighting Dog (now extinct) along with various other breeds, such as the Great Dane. The resultant breed today is known as Dogo Argentino, Argentine Mastiff or Argentine Dogo. They are excellent at both roles they were bred for – hunting and family dogs.

Dogo Argentino requires proper attention to its nutritional needs. They must be fed well to live healthy. It is a large dog breed and hence requires three to four meals a day.

The dog breed belongs to Argentina and is used to temperatures ranging from mild winters to hot and humid summers. In severe sub-zero temperatures, do not leave the dog outside. They are traditionally hunting dogs and hence require access to an open space such as a small yard.

Dogo Argentino is a big muscular dog that was used for hunting in the past. It hence requires a headstrong and firm leader that the dog can look up to. The dog being energetic and intelligent requires stimulus daily. It is preferable that the dog be raised in an open space so as to meet its exercise requirements. If raising the dog in an apartment, make sure that these needs are well met. Daily jogging or running or some form of sport is a must. These dogs have a knack for chewing and can cause grave damage especially when bored. Make sure they are never left unsupervised in the house at least until they are mature and properly trained.

The Dogo Argentino was raised to be a hunter and is a natural predator by instinct. Its predatory drive is quite high and coupled with its protective urge. The dog requires some sort of enclosed area at home or to be put on a leash when in public.

It will jump after a cat or other such small animals at the first whim and must be discouraged from chasing after them. It is best to begin socializing it with other animals when it is a puppy and also to train it properly.

Dogo Argentino is a pure bred dog breed. Its litter size is about four to eight puppies. It belongs to the Mastiff group of dogs. It is native of Argentina but is gaining popularity world over. Selective and careful breeding of the dog is must, as it is prone to a few hereditary diseases and defects.

Dogo Argentino has a white colour short coat. It has a muscular physique and a strong body. Markings are rare in them and are considered to be a flaw. It is slightly longer in comparison to its height. Its body structure is proportional with no particular feature overly dominating.

The dog has a low set tail. Its powerful muscles and the abundant elastic skin on its neck catch your eye. The eyes are a dark or light shade of brown with black or pink rims as wells as a black nose. The ears of some of the dogs maybe cropped. It has a glossy white coat. It will have a happy and pleasing demeanour and at the same time will seam intelligent and responsive. In a game, it shows its agility and athleticism.

This dog breed may have a lifespan ranging from ten to twelve years with some dogs living up to fourteen years.

Dogo Argentino is prone to several hereditary diseases as often seen in the case of large breeds like theirs. The dog breed may suffer from deafness due to pigmentation. The chances are one in ten and it may affect one or both ears. It may be reduced by selective stock breeding. Stick to a reputable breeder and make sure that they offer proper information and health guarantee on their puppies.

Besides deafness, conditions such as hypothyroidism, glaucoma, laryngeal paralysis and hip dysplasia may be seen in the breed. Hip dysplasia is a defect of the hip socket that is inherited. Its severity may vary from mild pain to serious, limiting the dog’s movement and jumping capabilities. Healthy lifestyle, medication and surgery are the options available for treatment.

It is suggested that at the age of two years, the dog’s hips should be graded by a veterinary orthopaedic specialist. You may request the breeder to produce OFA’s (Orthopaedic Foundation for Animals) evaluation for the breeder’s dog line. Besides hip grading, these evaluations include brainstem auditory evoked response (BAER) and thyroid evaluation. Avoid breeders who don’t have written documentation of puppy’s parents. Despite all precaution a puppy may still develop one of these problems but with proper medical care, the dog can still have good life.

Dogo Argentino has a short coat that allows for easy grooming, but the dog’s large size makes it a time-consuming affair. Shampooing once in while or when the dog is dirty is in order. Brushing once a week is usually enough. The ears require weekly checking and cleaning and the toenails need to be trimmed every month or so. Start grooming when the puppy is young to make sure it gets used to it.

Dogor Argentino sheds its white coat but up to a medium extent. The thickness of its coat may depend on the climate. Brushing once a week is recommended for dead hair removal and healthy skin and coat. 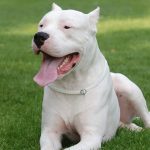 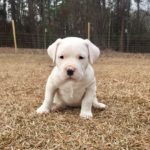 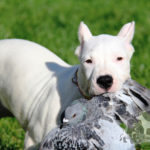 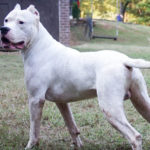 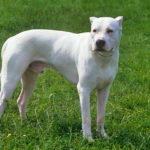 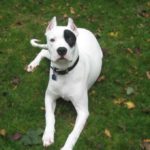 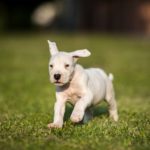 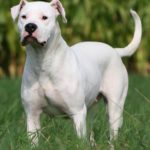 Dogo Argentino has a cheerful, happy and humble demeanour notwithstanding the fact that it is a hunting dog. They require socialization from an early age both with people and especially animals owing to their strong prey drive. The dog requires an authoritative human leader owing to the dog’s independent and strong-willed nature. Hence it is not recommended for first time dog owners. Obedience training is a must for them when they are puppies.

Dogo Argentino has a strong bond with its family and will often like to stay close to them and touch them. Give it proper attention and avoid leaving it alone for a long time. A properly socialized Dogo Argentino will be good with children as well as guests. Around small animals, supervision is recommended.

An adult Dogo Argentino may try to dominate dogs of the same sex but usually will not provoke confrontation. This behaviour may require correction from the owner. Early socialization may discourage this behaviour. When adopting a puppy, go for a breeder that raises pup in home and socializes them well. This breed is now used to work as police dogs, guide dogs, therapy dogs, search and rescue dogs and also participate in competitive obedience.