The Birds of Paradise were largely unknown to the western world and it was only in the year 1996, when a photographer, David Attenborough, mesmerized the world with stunning images of the birds, which he had captured on a trip to Papua New Guinea. Birds of Paradise are an exotic species of birds from South East Asia, which host a brilliant array of colorful, elaborate and elongated feathers. There are over 50 different species to be included in the Birds of Paradise and their height can range from small in size to over a meter in height. Most of the birds are indigenous rare species which are only found in their natural habitat.

The brightly colored feathers have been used for costumes and clothing and this has led to an enormous decline in the population of these birds. While some species still have healthy numbers, some others have attained vulnerability status.

The Birds of Paradise feed on wild fruits and berries as available in the tropical jungles. Some species also eat insects, especially spiders. Young birds rely on their mother for food until they are strong enough to go look for food themselves.

Birds of Paradise are known to live in tropical forests. This habitat may be in regions like rainforest, moss forest and swamps but it is imperative to know that they are tree dwellers. However, some species of Birds of Paradise have been spotted in coastal mangroves.

Birds of Paradise belong to the tropical jungles and feed primarily on wild berries and fruits. However, there are also some species of birds which prefer feeding on insects, especially spiders. Known to be solitary birds, the Birds of Paradise spend a lot of their time engaging in practicing their rituals and dances. When the time for mating arrives, these rituals and dances are exhibited out and it proves to be quite a treat for any female birds or even human onlookers.

Birds of Paradise are attractive, energetic and highly dramatic birds. They spend a significant portion of time performing little dances, rituals and this makes them stand out from other types of birds. While the birds of paradise are usually solitary birds, they do come together to mate. Birds of Paradise are quite energetic and active, especially the male birds. They require some amount of space around their habitat to practice their mating rituals and dances. A significant portion of the lives of these birds is spent doing such activities.

Birds of Paradise live for 5 -8 years but there is no comprehensive scientific analysis of their lifecycle. However it is believed that as with other birds, they undergo the following processes

All these processes occur during their lifecycle because Birds of Paradise are known to be adventurous.

The main predators of the Birds of Paradise prove to be humans who share the same habitat with them.

Most species of Bird of Paradise possess mating rituals. For instance, the lek-type mating strategy is effectively used by the Paradisaea species while species like Parotia and Cicinnurus exhibit the dancing strategy for mating. In monomorphic species, their males are monogamous while they are polygamous in most dimorphic species. Due to their polygamous behavior, there have been high cases of new species coming from cross-breeding of their parents Their nests are created from leaves, vine tendrils, ferns and other soft materials. However, their clutch size is quite unknown but it is believed to be between 1 and 3 clutches for both large and small species. It takes 16 -22 days for their eggs to hatch and their young ones abandon their nests when they attain the age of 16 – 30 days.

The Birds of Paradise are well-known for their bright colors, elaborate design patterns and elongated feathers. There are a number of species of birds and the males typically exhibit a bright and brilliant appearance in order to appeal to the female birds. The birds are lively, energetic and quite dramatic in performing dances and rituals. Their appearance is unique and really makes them stand apart as a species.

There are many different species to be included in the Birds of Paradise and as such, the size and the weight of the birds may vary by quite an extent. The smallest of the birds may be no more than 15 cm in height and 40 g in weight, while the largest of the birds attain a height of over a meter and can weigh up to 450 g.

The Birds of Paradise are a very colorful species of birds. Colors of feathers may include white, black, red, blue, green, yellow, grey or even brown and usually occur in combinations. The Birds of Paradise include different types of birds whose body types may range from small to large. The birds are sturdy, energetic and more often than not, engage in playful activities.

As with other birds, Birds of Paradise suffer from several health challenges including:

Breeders are advised to vaccinate their birds for effective prevention. Treatment can also be provided for infected birds as drugs can be obtained from various veterinary outlets. However, prevention remains the best option.

These birds are very attractive to look at in their natural habitat. However, on taking them out of their preferred environment, sufficient care must be provided so as to maintain the brilliance of the appearance of the birds. While the birds self-groom, they may also require some additional help in order to retain their attractiveness.

In their natural habitat, the Birds of Paradise are lively and energetic and face little problems with health or predators. As these birds are taken out of their habitat, some amount of care will need to be provided in order to ensure that the birds do not face problems. The birds are quite poor in adaptability to different climates.

Birds of Paradise do not shed their feathers heavily. They drop few feathers three times a year.

Images, Pics, Photos and Pictures of Birds of Paradise : 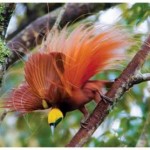 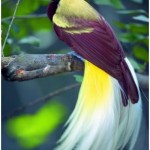 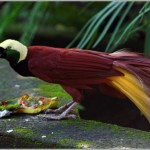 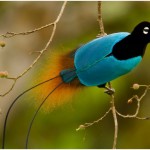 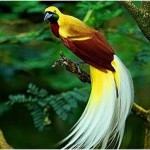 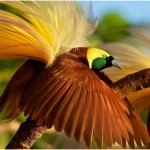