Bald eagle is a predatory bird that is found in North America. They are large in appearance and brown in color on the wings and body, with bright white head and tail. They are called bald eagle not because they are bald, but because of the contrast in color of their head and body. Because of the laws that were implemented to protect them, the conservation status of these species is least concern, that is, these birds are not threatened or endangered. Their diet mainly consists of fish.

Bald eagle prefers to live near big lakes or other large water bodies where fish are easily available. Also, for nesting and roosting purpose, bald eagles prefer dense forests near the lakes. It prefers tall trees with good location. This is because, tall trees will provide excellent visibility to find any prey. Their habitat is also dependent on the location. For example, in Florida, their nesting habit is generally mangrove swamps, seasonal flooded woods, pinelands and pasturelands. Bald eagles usually prefer minimum human disturbance and prefer secluded areas for nesting.

Bald eagles enjoy safety from other predators as it is on the top of the food chain and there are not really any predators that threaten the young ones or the eggs of the bald eagles, as they are very protective about their young ones. Parents take care of their young and provide them with food until the young ones are independent. Also, bald eagles like to groom their feathers. Sometimes, even mates groom each other’s feathers.

The bald eagle usually have only one mate and they use the same nest year after year. The female lays about 2 to 3 eggs in an enormous nest. These eggs hatch in about 5 – 6 weeks, and the chicks are ready to fly when they are 12 weeks old. The chicks usually stay with their parents until they are 20 weeks old. 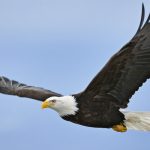 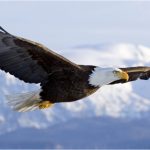 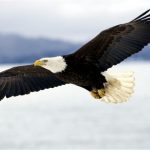 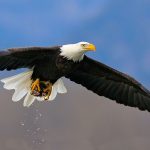 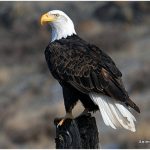 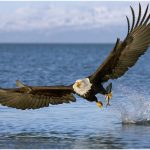 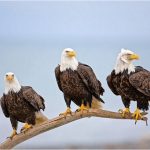 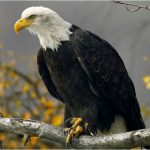 As bald eagles are at the top of the food chain, the get affected by all the chemicals consumed by the birds and animals of lower food chain as chemicals gets concentrated in each link in the food chain.  The most dangerous chemical that had affected the bald eagle was DDT, a pesticide that is now banned. Another reason of concerned health issues in bald eagles is lead poising. This happens when the eagle consumes a dead animal or bird that has been shot by lead bullet.