Giraffes are said to be tallest living terrestrial animals. Also, they are the largest animals that can gain nutrients from plant based diet, also known as ruminant. A giraffe can be distinguished by its extremely long legs and neck.  They have horns like ossicones. The conservation status as of 2016 is vulnerable.

Giraffes usually live in the savannas and where there are tall grasses and open woodlands. Their height enable them to eat leaves form tall tress during famine and draught.

Giraffes usually prefer groups, where the groups are sex segregated. That is, a group may consist of all females with their young ones. But sometimes, the groups may have both male and female members. Giraffes have some home ranges but are not at all territorial.

Despite being the tallest animals they may sometimes fall prey, especially the young ones, to predators like lions and hyenas. Giraffes usually have good instants and can protect themselves with their long legs by kicking their predators. But the predators target week, old and the young giraffes that are not capable of protecting themselves. 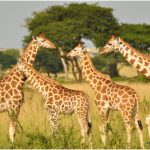 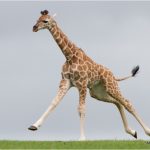 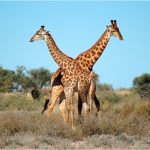 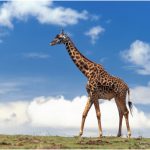 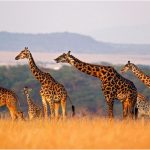 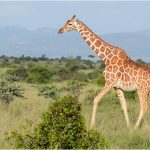 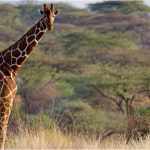 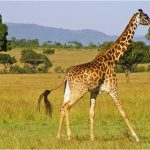 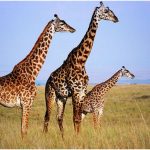 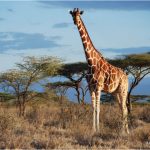 Adults Giraffes have high survival probability because of their height and built. They can live upto 25 years in the wild. But calves are very vulnerable to predators and not many calves make to adulthood.

Giraffes are susceptible to parasites especially ticks that reside on their genital areas where the skin is thinner as compared to other areas. Also, some other parasites may also reside on them making them prone to numerous diseases. Some giraffes are also prone to various skin diseases.