The emperor penguin is considered the tallest and the heaviest among all living species of penguins. They spend their entire lives on the ice and surrounding waters in the Antarctica despite the harsh climatic conditions in the part of the planet.

Description Of The Bird :

Emperor penguins are adapted to survive the extreme cold, pressure and low oxygen in the Antarctica. It is the only bird able to breed in such extreme cold conditions of up to -60°C during the Antarctic winters. The average penguin temperature is about 39°C but it is adapted to avoid any losses of heat to the environment.

The feathers provide a high percentage of insulation to avoid heat loss. It also has a layer of fat of 3 cm thick prior to breeding. Moreover, the muscular density all over the penguin body allowing the feathers to stand erect on the land to not only generate heat but to also prevent heat losses. In water, the flattening of plumage to ensure waterproofing its skin and its downy under layer for purposes of maintaining warmth. It is also able to maintain its body temperature without having to alter its metabolism.

To survive another condition that is deemed stressful of diving and having to stay up for longer without breathing, the penguin has stronger solid bones to survive the pressures under water. When diving, the penguin’s use of oxygen is reduced significantly with the heart reduced to a possible low of 15 beats per a single minute. There is also the shutting down of non-essential organs to reduce oxygen consumption to facilitate longer dives.

There are no nesting supplies available on the ice covered grounds of the Antarctic regions. Emperor penguins therefore create a safe, warm environment for their own eggs using their bodies. For survival, the penguins get into breeding colonies located in places where they are sheltered from the harsh wind by the icebergs and cliffs.

Its diet consists of mainly fish and other foods such as crustaceans and cephalopods. The bird searches for food in the sea waters, in ice-free areas, open, cracks in park ice and so on. It swims up to the bottom of the waters in search for food sometimes. The emperor penguin’s tongue is equipped with rear-facing barbs to prevent prey to escape when caught. 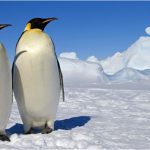 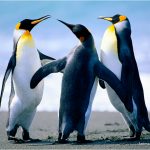 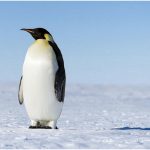 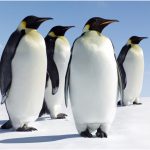 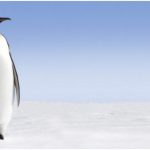 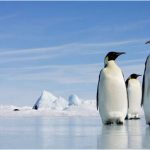 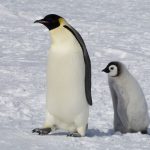 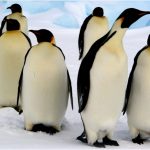 Penguins are known to be very social animals and emperor penguin is no exception. It is very social in its nesting and foraging behavior; it jointly hunts with others and may coordinate their diving and surfacing. They also have very special relation with humans and other friendly animals.

Emperor penguin, just like any other animals, they fall prey to other sea and land animals. Their main predators include leopard seals, sharks, killer whales, skua and Antarctic giant petrels.