Penguins have gotten a lot of attention over the past couple of years. With ground breaking film making following them through their natural habitat many were astounded by the great lengths of hardships that they go through in their lifespan. They are beloved because of their cute appearance and their formal style tuxedo wear, but they are not all the same. There are many different types of penguins, all being unique and having their own characteristics. One such type is the African Penguin.

The African Penguin is also more commonly knowns as the black-footed penguin with good reason, it has a black foot. It is a species that has found its home in the waters of south Africa. Also having the knick name “Jackass” because it makes a sound that is very reminiscent of a donkey, it looks nothing like one.

The African Penguin is like a human in their mating rituals. Once they find a mate, it is a mate for life. They are completely monogamous creatures, and live in colonies where couples inhabit the same space together. Their breeding period is from March until May. When they do have offspring, it is usually one to two eggs which they lay into nests. The eggs mature for a time of up to 40 days when at least one parent takes responsibility for guarding the nest and sitting on the eggs for warmth and protection.

After the eggs hatch the chicks usually remain with the adults for anywhere from 60 to 130 days, depending on the conditions of their surroundings. After 12 to 22 months they begin their own adult lives. The average female penguin is fertile for up to 10 years of their lifespan.

Most penguins will live if not taken prey by another species for up to 27 years. The natural predators of the penguin are Cape Fur Seals and sharks. Other prey on land that they may fall to are mongooses and domestic cats, especially the eggs of their young.

African penguin normally is about 27-28 inches tall and weighs approximately 5 to 11 pounds. Unlike other species of penguins they have a black spots contained on the chest region and a black strip. Each penguin has a different pattern of spots which is characteristic only to them, very similar to a fingerprint. Pink glands cover their eyes which keeps the eyes cool when the temperatures around them get too hot. The males are usually larger than the females and have a much more pointed beak. The black and white colors that they display is not only cute, it serves as camouflage for them against prey. The most defining characteristic that they possess which other penguin species do not is black feet and black spots on the white part of their fur.

The African Penguin lives in Port Elizabeth and Namibia in South Africa. 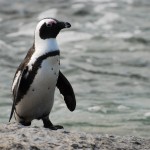 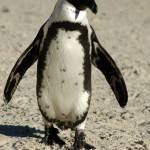 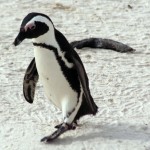 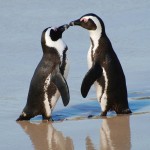 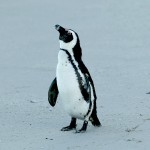 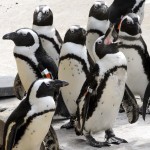 African Penguin mostly eat marine life. They eat fish such as anchovies and pilchards, squid and crustaceans. They don’t need very much to eat daily, at average they consume no more than 1 kg when fully grown. Because of the scarcity of food, they have had to alter their diet which has made pronounced changes in their overall health and viability.