The entire nature itself is wonder creation. It has multitude species and each species has a typical life style. The harmony between each species is unbelievable. Alligator are large, semi aquatic, carnivorous animals. They mainly inhabit in water and can live on land too. Alligators are species of crocodile but are different from crocodiles in nature of habitat and appearance.

Alligators are four legged animals with a lengthy tail. The recorded length of Alligator is almost 19 feet. The tail is almost half in length to the total length. One may ask, why is the tail of Alligator is so lengthy. Remember, Alligator mostly live in water and it requires something to propel & keep it moving in water. The movement should be free and fast. The tail allows Alligator to maneuver fast. Alligator being a carnivorous animal, the requirement to move fast and free is a major advantage.

Well, you have observed in TV shows, articles that Alligators usually enter water when there is prey and sit motionless on the banks. Why do they sit motionless on the banks? Alligators are essentially cold blooded animals, they do not have facility to conserve heat. They bask under sun to get heat. One more important task of the tail of Alligator is that it is used to dig holes. During drought phases, Alligators dig holes either on the bed of the river or on banks to get water. These holes are called as ‘gator holes’. The fearful use of the tail is as a weapon. Since the tail is long and hard, Alligator strikes the prey immobilizing or sometimes killing the prey.

The body of Alligator is basically bone structure with no provision to store heat. All the fat is stored in the tail which will be utilized during winter season. The feet of Alligators are fused together with the help of skin usually like a web. It is called as web feet. Both the ends of the body of Alligator is tapering while the middle portion is a bit bulky. Perhaps, the modern day weapon torpedo is built with the structure of Alligator in mind. Since both the ends are tapering, Alligators can surge ahead in water easily. While submerged a flap closes the breathing apparatus of the Alligator.

Even though Alligator walks on land with a maximum speed of 10 kms per hour, it is the fasted crocodilians on earth. In the water, Alligators usually gallop at a speed of 17kms per hour. Alligators are plantigrade; which means, they walk on land like a flat footed manner. They can also run faster on land but only in short bursts. Alligators live submerged in water but keep their half mouth outside the water. Alligators need air to breath hence they keep their snout outside while the entire body is submerged.

The habitat of Alligators are usually brackish water, swamps, canals, lakes and marshes. Alligators are not concerned about how murky the water is; it is comfortable in any kind of water body. There are 2 types of Alligators in the world, one type live in south eastern part of USA, hence it is known as American Alligator. The other type in Yangtze river basin in China and is know as Chinese Alligator.

Alligators are nocturnal which means they are active by night. They hunt during night time. Alligator while young eat, small fish, tadpole, frogs, insects, shrimps and snails. Adult Alligators eat fish, reptiles, mammals and turtles. Alligator does not have any mechanism to tear the prey while eating. They swallow the prey as a whole. The interesting part is Alligator teeth is sharp but not suitable for tearing the prey. The jaw mechanism helps in gripping the prey fast and hard. Adult Alligator swirl their body violently in the water when the prey is large. This swirling movement not only kills the prey but enables the Alligator to gulp the prey.

Female Alligator guards the next viciously. It lays very close to nest and attacks any one approaching the nest. Once the eggs are hatched and young ones start crawling, the mother Alligator gently picks them by mouth. It then leads the young ones to the water body and stays close to them while they test the water. Once the young ones are confident and start swimming then they are on their own.

The general life cycle of Alligators is 30-50 years. In captivity they can live up to 60 years. The Alligators are quite amazing animal species since they have survived the evolution. The present day Alligators and crocodiles are living example of dinosaurs and other similar animals. 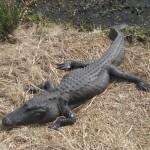 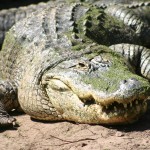 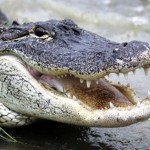 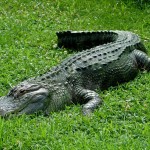 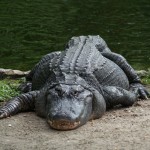 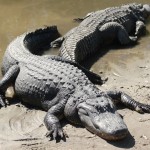 What makes Alligator immune to attacks by other predators. The skin on the back of the Alligator is very hard and with multiple fold. The skin is projected in the shape of spikes. Even though Alligators are susceptible to snake poison, probably because of its defensive skin formation, snakes cannot sink their teeth below the hardened skin.

Alligators are shy animals. They live in solitary. They are known to guard their territory but are not very violent towards each other.