The even toed ungulate species present in the different regions of Africa and Eurasia are referred to as Antelopes. They form a miscellaneous group under the Bovidae family and form a part of the old world species that do not go with sheep, bison, goats or cattle. Antelopes in groups are called as herd.

The English word antelope appeared in 1417 and has its origins in French, Latin and Greek. It means a savage, difficult to catch beast that has saw shaped horns that cut down trees. In Greek, the word means beautiful eye.

There are 91 species of antelope with about 30 of them found in Africa. They have not been defined taxonomically yet. They generally belong to the Bovidae group and species of Antilopinae, Alcelaphinae, Reduncinae, Hippotraginae and Cephalophinae belong to the antelope group.

The entire bovid species have hooves that are even toed. They have ruminating guts, horizontal pupils and bony horns. The length of an adult antelope is only 24 cm and weighs only 3.3pounds. All animals have long and powerful legs that helps them move in long strides and also they can run at great speeds. Some species like the klipspringer can also inhabit rock koppies and the crags.

The different varieties have different body shape to enable them survive in their respective habitat. Dukers are short and can dive into the shadows at a rapid pace, while Gazelles, as well as springbok are fast runners and have great leaping qualities. The larger antelopes like nilgai, eland and kudus can jump to a height of 7.9ft.

The coat is dense and is made of fur and varies in shades from brown to white and have pale underbodies too. The zebra duiker is an exception with white, black and grey shades.

Antelopes are basically ruminant animals. The well-developed molar teeth help them to grind cud, which is the food ball that is stored in the stomach, to a pulp form for easier digestion. Instead of upper incisors they have a hard gum pad in the upper jaw. The lower incisors bite against this upper gum pad to tear at the leaves and stems they find.

The antelopes are usually classified according to the reproduction method. The small species like dik-diks are monogamous. They reside in forest surrounding and the male is not able to dominate more than one female because of the sparse distribution. The herds typically have four females with only one male.

The species like lechwes use a lek breeding method, in which the males group together in a lekking area and fight for a small area, while the females supervise them and select the appropriate mate. The impala or the wildebeest usually reside in large herds that have more females with only a single male, who has excluded all other males by duel.

Similar to other herbivores, antelopes depend on their keen sense to escape from predators. The wide placement of the eye helps them to get a broad vision area. The acute smell and hearing sense helps them to sense danger even at night in the open.

The heightened senses are also used to communicate with members of their herd by moos, flashes, whistles and trumpeting. The defense techniques employed by the antelopes differ, according to the morphology. The larger antelopes depend on the numbers and their running speed. The adults will protect their offspring when in danger. The cryptic coloring and good sense of hearing helps them to avoid the predators. Springboks use ass-totting to confuse the predators. For antelopes that live on open areas, fast running is the only defense line they can take.

The female antelopes give birth in a period of 4 to 9 months from their mating date and the breeding also depends on the species type. The calves are usually cleaned, given the feed and protected in a safe spot.

The mother antelopes visit the calves regularly to clean and feed them. This is done so that the predators do not find the calves. The calves remain motionless, hidden in the undergrowth, when left alone. After few weeks they go with the herd and they are independent and spend time together with other calves, instead of being with their mothers.

Nearly 25 species of antelope are in danger of becoming extinct. Dama Gazelle and mountain nyala are some of the species that are endangered. The loss of habitat, less area for grazing and unrestricted trophy hunting has made them an endangered species.

The Tibetan antelope is hunted for the pelt, which is used in shawls. For a single shawl, many animals have to be killed leading to a large scale decline in the chiru antelope population. The horns of saiga antelope is in demand and even regarded as aphrodisiac in some cultures. The males have horns but the females do not have any.

Antelopes are not seen in Australasia, Antarctica and America. The saiga species is the only one found in North America during the Pleistocene period. Africa has many species, while some are in Asia too. India has nilgai, blackbuck, four horned antelope and Tibetan antelope. Arabian Peninsula has the Dorcas gazelle and Arabian oryx. Saiga antelope and Tibetan antelope is found in Russia and Central Asia.

Many antelopes have been imported to the United States for exotic hunting and are found in the ranch areas of Texas. Most of the antelope population is found in African savannah. The species that inhabit forests, bushes and woodland are sedentary, but the ones in the plains are migratory. They follow the rain to get food supply. 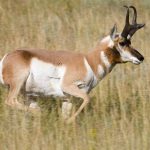 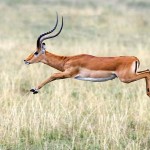 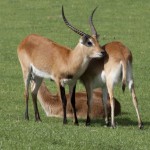 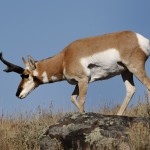 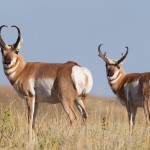 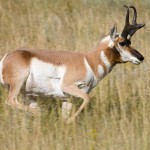 The majority of antelopes reside in herds for protection. But living in herds will make it difficult for them to find food. So, some of them live in small groups, or alone. The senses are excellent and they are rapid runners and leap to escape from predators. They can run at 95 km per hour speed. But the desert species cannot run fast, as they have wide feet for easy movement on sand.