The body of the barracuda is very elongate and is cylindrically shaped in the front with long head and a sharp pointed nose. It has a large mouth with protruding lower jaw filled with several sharp edged teeth. The teeth of this fish are irregular in size making it easy for cutting its prey into two halves. Barracuda is long sized silvery fish having two dorsal fins and belongs to the family Sphyraenidae. They closely resemble the shape of the pikes owing to its body shape.

Barracuda are mostly grey in color on its top and pale grey on its lower part of the body. It has several dark spots on the body without any streamlined pattern. The young ones would have dark oblique crossbars on their back which would also extend below the lateral line of the body till the rear end.

Barracuda gives you scary appearance owing to its large size and dark spots over the body. They are elongated fish resembling pikes with prominent, sharp and knife edged teeth. The color of this monster fish is grey on its upper part and silver colored on its sides. Some of them are dark green or blue in color.

Average length of an adult barracuda is 2-6 feet and it weighs anywhere from 15-30 pounds. It can grow up to 200 cm in length depending on the species. Owing to its sharp and pointed teeth barracuda has been fondly called “Tiger of the Sea”. It is largely found in coral reef areas of Florida and Bahamas and is capable of moving rapidly taking tight turns. It is difficult to catch barracuda without having a wire bite. They are capable of chasing long flies and can leap swiftly even when hooked. Barracuda can thrive well in 60-85 degree Fahrenheit.

Barracudas are known as inflatable fish since they can swim quickly in narrow and twisty turns. It has the ability to inflate and deflate its bladder since it has in-built gas filled chamber. These swimmers can rise or lower its body to any level due to the shrinking and expanding chambers inside. They usually wait motionless for long time for catching its prey. When it senses its predator nearby it leaps fast like a lightning and kills them in a second.

Barracudas feed on flies and other small fishes available in the ocean. It catches its prey in surprising manner since it has the ability to change its skin color suiting the environment. This strategy is known as cryptic coloration through which it takes up the skin color matching the surroundings so that it is not spotted easily by its predators.

It keeps its mouth wide open thus projecting its long sharp pointed teeth. It can easily cut the large fish into half using the sharp knife like teeth. It feeds on small and large fishes and anything that comes close to the bottom of the reef. Adult barracudas eat any type of fishes like mullets, trigger-fishes and ballyhoo by chopping them nicely through its teeth.

In the juvenile stage they act like needlefishes eating small snapper as food. Their favorite diet includes herrings, killifishes, gobies, sardines, silversides, small mullets, lizard-fishes and many other fishes. A young barracuda enjoys having bay anchovy for its diet. As they grow old barracudas compete with many large fishes like mackerel or dolphins and eat anything available in the water. They feed on many species that lives in bottom of the coral reefs. It is believed that great barracudas are capable of driving herds of fishes into the shallow water and keep watching them until they become hungry and kill them.

Barracuda have wide options for survival and they can manage to live anywhere from inshore flats or open ocean. It is largely found in bays, inlets and lagoons and more particularly on coral reefs. They are found inshore during summer season and tend to move into offshore or deep layers of water during winter.

You can spot them on the Western Atlantic regions, Mediterranean Sea and on tropical waters. Plenty of barracudas can be seen on the submerged coral reefs of Florida and on the Galapagos Island and western Panama. Great barracuda lives on all warm waters like Indo Pacific region, Atlantic Ocean, Red Sea and some of its species are also found in Massachusetts.

Great barracudas use ram strike feeding method wherein it quickly lunges its prey into the jaws and using the sharp knife like teeth it cuts them into several pieces for easy digestion. The selection of its prey depends mainly on the length of its mouth and it feeds on schooling fishes and even on plants. Barracudas are diurnal staying active both in the daytime and night. They stay more active during the early sunrise hours feeding on sea grasses.

It is not clear about the exact timing on which barracudas reproduce and fertilize. It is believed to fertilize during spring. Some experts opine that they spawn during particular phases of the moon. Except in the winter months, barracudas are capable of fertilizing throughout the year. They show different patterns of spawning based on the location in which they live.

Female barracuda will not care much for the fertilized eggs and drop them into the ocean currents. Once the young barracudas develop they will reach the shallow waters like estuaries and seek shelter in the marginal regions of clear water. It stays there till the larvae reaches 70-80 cm in length after which they move into the deep water regions. As they increase in size they will start moving towards the open water zones leaving the estuaries. A male barracuda will reach sexual maturity in about 700-750 days after birth and for female it is 1400-1450 days.

Barracudas reproduce sexually by means of external fertilization. Thus the male attains full sexual maturity during the second year of birth and females are fully developed when they are 4 years old. They do not have sexual dimorphism and only on close examination of their gonads their sex can be determined.

It is said that adults are involved in sexual activity during April-October months and releases the fertilized eggs into the water. Females are capable of spawning many times during the same season and capable of producing more than 5 million eggs each time. Still there is no clear evidence to elaborate about the embryology of barracuda. Attempts were made to culture the eggs in the laboratory settings have become unsuccessful so far.

Humans are the predators of barracuda apart from natural predators like whales and sharks. But they contain plenty of toxins and are not good for consumption. In the USA the federal government has banned to catch and sell barracudas. Coral reefs are facing danger in recent times and hence barracudas are not finding good homes to reside and reproduce. Since more and more fishes are taken out from the reefs, barracudas are not getting enough food to eat.

Tourists who indulge in diving into the deep regions of coral reefs should be cautious since barracudas can prey on them anytime. Predators should be aware of ciguatera while eating barracudas. Ciguatera is a serious illness causing several physiological deformities and sometimes even death. Owing to the danger of poison, barracuda meat is banned by the Food and Drug Administration FDA of the USA. Due to its aggressive nature, barracudas can attempt to kill people who are engaged in snorkeling in the reefs.

They tend to settle down on the water bodies that possess plenty of marine vegetation. Young ones stay close to shallow water like estuaries and when they attain full maturity they delve into the open deeper parts of the sea. They are capable of swimming at 40-50 km per hour. 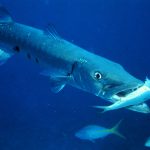 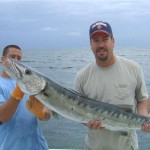 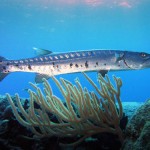 Average lifespan of barracuda is about 14-15 years.

Barracuda : At a Glance