Basking shark is placed in the second rank after whales in its enormous size. It is fond of eating planktons like whale shark. You can find this species in almost all the temperate oceans of the world except the Indian Ocean. They are called by other names like big mouth shark, elephant shark and sunfish. It can be easily identified by its large opened mouth through which it can drink almost 1500 gallons of water in the same time. Owing to its enormous sized mouth it can filter feed on its prey with the help of hundreds of tiny teeth inside.

Basking sharks are fond of migration and they live in deep areas of water during winter months. Although they like to hunt alone it is seen in small herds of its species. They do not harm people generally but the very size of this fish is enough to scare them. They are mostly brownish grey in color with mottled skin on its body.

Basking shark is marked by its specially made oversized mouth which can be more than 3 feet in width. With such a mammoth size you would expect large sized teeth in this mighty creature. But they have small teeth arranged in rows both on the upper and lower jaw. It is adapted to choose its diet with the given features of largemouth and small teeth. It is funny to note that basking sharks always keep their mouth wide open when they swim so that they can easily sieve the plankton and other small fishes out of the water.

You will be surprised to know that a basking shark of average size would have about ½ ton of food substances in his stomach all the time. Basking shark is capable of swimming rapidly but sometimes they remain silently on the same place waiting for suitable prey. Normally they travel at 3-4 miles per hour and hence they are slow moving fishes. But at the same time, they are capable of moving thousands of kilometers without getting tired since they are migratory in nature.

They are the only largest species available in the British water. It feeds heavily on planktons like some varieties of shark species. It is interesting to note that these giant fishes can be seen on the surface of the water most of the time except during peak winter.

Basking sharks feed on planktons in plenty. They are called filter feeders since they can filter the food particles through its tiny teeth effectively. On an average they retain half a ton of food particles of plankton and other fishes in their stomach. They are not active feeder and filters plankton through gill rakers. Like other shark species basking shark is also carnivorous and his diet primarily includes planktons, squid, fishes and crustaceans.

Basking shark can thrive on the coastal waters that are in the warm temperate climate zone. It can live in 8-15 degree Celsius and sometimes even more if its habitat is near the equatorial region. Normally they live closer to the land like bays and narrow openings. It chooses the water column that has plenty of plankton concentration.

You can see these monster fish at the surface of the water. They are interested in moving to other deeper places during unfavorable season like winter and fall. Since they are fond of basking in the warm sunshine most of the time, these creatures are called basking shark. You can spot some of these large fishes deep into the ocean from 2800-3500 feet.

Recently one of the species of basking shark was caught in the Bay of Fundy which measured 40.3 ft in length and weighed about 20 tons. They are found in coastal region of North America, east coast of the USA, Canada, and Gulf and on the entire coastal region of Europe. It is also seen in Australia, New Zealand, the Red Sea and few numbers on the coastal zones of China and Japan.

These large sized fishes prefer to live alone and feed on their prey solitarily. But you can see them in groups ranging from small to large sizes living together in the same place. Basking sharks shed their gill rakers (which help them in feeding on planktons) gradually during their movement and get new ones. Another interesting phenomenon about basking sharks is they do not avoid the approaching boats like other sharks. They are least bothered about fish baits and ignore them and continue to move on.

Unlike other fishes that hibernate during day or night, basking sharks do not hibernate and stays active for all seasons. Even on peak winter months, they tend to move into deeper ocean (2800-3000 ft) or even more for feeding on planktons found there. In a study conducted on 2009 in Massachusetts these fishes are seen migrating towards south during winter months. Some of them are capable of reaching Brazil crossing the equator bearing warmer currents in the ocean.

Basking sharks have been an important source of commercial food for people and there is a great demand for its liver and fin. Hence humans are the worst predators of these rare species which is continually declining in number. If the same process would continue for few more years, then these magnificent fishes may become extinct. White sharks (giant size) can attack these fishes apart from killer whales. It is the responsibility of humans to protect these Congo fish from disappearing by not exploiting them for food. It is our duty not to pollute the water bodies which remains the home of several other fishes.

They indulge in mating during the warm months of the year. Both male and female attain full maturity sexually when they are 3 years old. Gestation period may extend beyond one year and go up to 3 years for many mothers. The pups of these sharks will be about 2-3 meters in length and they begin to swim in the mighty ocean currents as soon as they are born. Each mother shark will yield 5-7 puppies in one season.

Next to whale fish, basking sharks are the largest creature in the water. It has an enormously sized mouth which is kept open most of the time. It has specialized feature called gill rakers which is renewed and replaced gradually. Its nose is cone shaped and the gill slits are found in and around its head. The gill rakers are highly useful for catching plankton when these fishes swallow gallons of water along with planktons.

The water is filtered through its mouth and sent out through their gills. It is dark brown in color with a soft mottled skin. It has tail fins which are crescent shaped. Its teeth are absolutely irrelevant to its size having tiny sets of teeth both in upper and lower jaw. You can easily distinguish these giant fishes by its characteristic large mouth kept wide open. 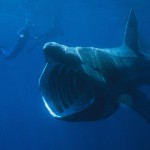 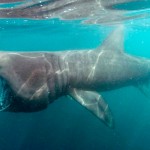 It is believed that basking shark can live up to 50 years if left untouched by predators.

Basking shark : At a glance

• Basking sharks are giant fishes that lives on warm coastal regions of many countries.

• It has a distinct large mouth (almost 3 feet in size) with hundreds of tiny teeth embedded in it.

• They feed on zooplanktons in plenty and do not harm human beings as many of you imagine.

• They are largely seen on the surface of the water since they love to feed on planktons available there.

• Now it is being hunted by humans for fins and liver oil and hence they are gradually reducing in number.