The dugong is a medium-sized marine mammal who is the only surviving representative of the Dugongidae family. Out of the Sirenia Order that also includes three manatees’ species, the dugong is the fourth living species. From the family of Dugongidae, which was once very diverse, the dugongs are the only living and surviving representative of theirs.

Their closest modern relatives were the Steller’s sea cow known as Hydrodamalis gigas, who were hunted down to extinction in the 18th century. They are strictly marine herbivorous mammal.

Dugongs, as well as other other sirenians, are also called “sea cows” as their diet mainly consists of sea-grass.  When they eat they ingest the whole plant, which includes the roots too. If ingesting the whole plant with its roots is not possible they will just feed on the leaves.

An extensive diversity of sea grass has been found in their stomach’s contents. There is evidence that they eat algae when they are not able to find sea grass.  If they are herbivorous, they occasionally eat jellyfish, shellfish and sea squirts which are invertebrates.

The Dugongs are mostly found in the east coast of Africa to the western Pacific Ocean which consists of warm coastal waters with an estimated 86,992 miles or 140,000 kilometers of coastline. Today the dugong population is found in the waters of thirty-seven countries. Due to the lack of accurate surveys, it is believed that the actual numbers are higher than the recorded numbers of dugongs.

In spite of that, the dugong population is believed to be shrinking, with a universal decline of 20% in the last 90 years. They have vanished from the waters of Mauritius, Taiwan, Hong Kong, and from parts of Japan, the Philippines, Cambodia and Vietnam. They now mostly reside in the waters of south Asia, east Africa, Australia and the Pacific Ocean.

Although the dugongs are social animals, they are typically solitary or found in pairs due to the fact that the sea grass beds are not able to support large populations. Sometimes, Gatherings of hundreds of dugongs does happen, but they last for a short time. The facts that they are shy, and do not approach much to humans, so very little is known about the dugong’s behavior.

They can drive six minutes underwater before coming to the surface. They have also been known to rest on their tail and breathe with their heads above water. They, being able to dive to an extreme depth of 128 ft or 39 meters give them huge advantage, but they spend the most of their lives within the depth of 33ft or 10 meters. They Communicate between them through whistles, chirps, barks, and other form of sounds which echo underwater.

Diverse sounds have been detected with dissimilar amplitudes and frequencies, suggesting different purposes. They have a very poor eye sight and so their visual communication is very limited. It is mainly used for activities like courtship purposes or lekking. Mothers and calves are the ones that are mostly in constant physical contact.

About Dugong’s lifespan and Their Predators

The Dugongs live for a long time when compared to other marine creatures. They live around seventy years, and the oldest dugong that has been recorded officially was 73 years of age. With a lifespan of seventy years and a slow rate of reproduction, the dugongs are very vulnerable to extinction.

The dugongs are affected by a wide number of parasitic diseases and infections. Pathogens that were detected included helminthes, different types of bacterial infections’ cryptosporidium, and other unknown parasites. It is believed that, since 1996, almost 30 percent of dugong deaths in Queensland are due to diseases.

They have a very few natural predators, animals such as sharks, crocodiles, and killer whales pose a great threat to the young dugongs and a dugong was also officially recorded to have died of trauma after he was impaled by a stingray barb.

The dugongs look very similar to a manatee even though they are from different species. They are very closely related and look almost identical to one another, except when you look at their tail. The tail of the dugongs is characteristically forked like that of the tail of a shark, whereas the tail of the manatees is flat and broad, a little more flipper looking and not fin looking.

The Dugongs are slightly smaller than manatees’ with an average adult dugong that reach the lengths of 3 meters around and weigh around 400 kg, which is almost the same as a big cow. In length, the dugong’s front flippers can be as much as half a meter.

It is assumed that the legends of mermaids might have originated, after sailors from distant glimpsed at dugongs swimming in the water, and mistook them for half-fish and half human creatures. 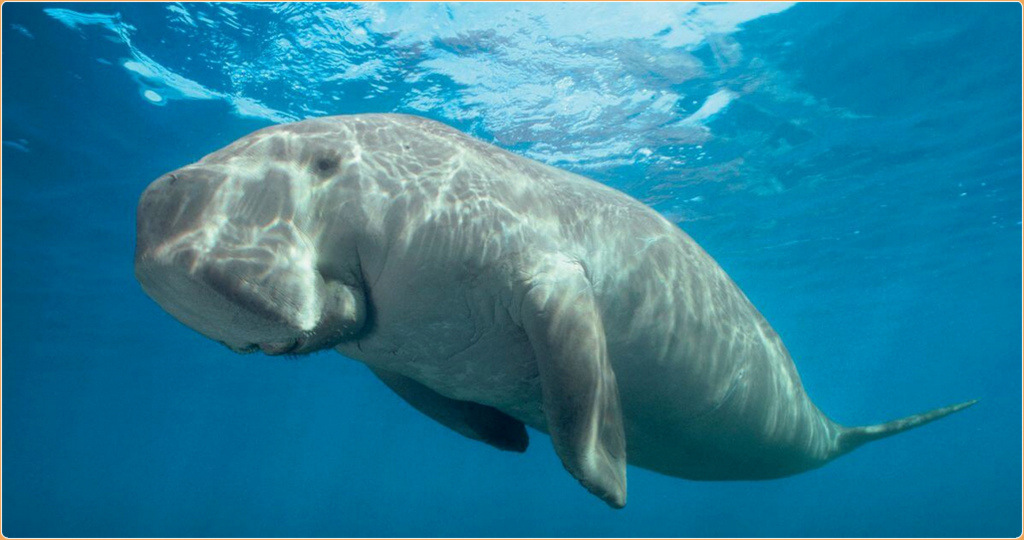 The Dugongs share similar characteristics with the elephants and other aquatic mammals with a gray skin color that is laden with rough hairs. The dugong’s skin is also extremely tough and in some places they are wrinkly like the skin of an elephant. They are smoothing over on the underneath.

To be able to swim without any kind of problems, the front limbs of the Dugong are fully adapted for swimming and are of flipper kind and paddle shape, due to this adaption, the tail looks very much like the whale’s tail. The female dugongs are characteristically larger than male dugongs. The males have prominent tusks, which develops when they mature.

Sometimes, mature female dugongs also develop tusks because the dugongs are herbivores and feed only on plantation, sea grass and algae, although sometimes shell fish and jellyfish. Their mouth has developed to open downwards. They have a very powerful upper lip that covers the entire mouth. This adaptation is perfect for them as they feed from the bottom.