Basenji dog belongs to the category of hunting dog that was originally bred from central Africa. It is a strange dog that does not bark but makes a yodel noise. It is capable of howling and growling depending on its mood. Basically this type of dog is highly energetic and needs lot of exercise. It is also called the Congo dog in England. It was the English people who identified it and several breeders start exporting this species all over the world.

Basenji is the most ancient type of dog breed available. A trace of this type of dog is found in the Egyptian tombs that were built 5000 years ago. The features that resembled the Basenji might have evolved thousands of years ago and now Basenji is a pet dog that can be breed on an apartment.

Basenji dog is affectionate and curious dog which can be a good pet for you. It is intelligent and can be trained easily. It returns its love to his master profoundly but is somewhat reserved. It does not like to mingle with strangers and hence if you are planning to buy this breed you should socialize it well. It responds at its best with children and plays with lots of toys.

Basenji is marked with unique property of not barking like other dogs. But it makes a peculiar noise like howling and crowing when it is happy. It likes wet weather and likes to be clean always like a cat. This breed is frisky and tireless when involved in playing. It needs daily exercise and walking to release the pent-up energy. It responds well if you treat it affectionately and you can get nothing if you demand total obedience from it. Basenji dogs cooperate with owners who show natural authority and can be wonderful pets for them.

Basenji dogs are both carnivorous and omnivorous. It can adapt to any type of diet according to the eating habit of his family. Dogs are fond of variety of foods from vegetables to protein rich meat. In many cases there are reports to indicate that Basenji dogs can thrive only on starch diet.

Diet is the same for Basenji dog like other pet dogs. It chews on almost anything available in the house including your valuable items. This tendency to bite and chew becomes more pertinent if you leave them lazy. Give him lots of toys to play and chew and he will be quiet and responsive to you. It will be a good companion for you if you give him lots of exercises daily.

This breed can live in your apartment with comfort provided you care for all his needs. It stays very active indoors and even a small yard is enough to keep them energetic. Basenji dogs love to be in association with other Basenjis and even cats. It demands a daily walk from the owner and can become fat if left without any exercise.

Basenji dog is intelligent and affectionate dog and can become a good pet for anyone. You need to tame it regularly from his early age so that he would respond well. It does not bark but is far from being quiet or silent. It howls growls and yodels whenever he wishes. It is difficult to get it trained since they accomplish only for love and affection and not for compulsive and obedient behavior. Basenji dogs are ranked second next to the Afghan breeds for least trainable dogs.

They need to be on vigorous exercise daily failing which they become lazy and fat. They always enjoy having a long walk daily with his master. Overall, Basenji can be playful, mischievous and overly active in nature. They love to be in groups and do not fight with each other.

Basenji dogs stick on to their masters and stay curious to their demands. It is to be trained from early age since they are stubborn to get trained and prefer to live independent. They should not be treated at par with other non-canine pets. It can adjust to a city apartment with little space provided you treat them with fond and care. You cannot just leave them in your garden after arranging for food and water. They need company all the time in your family like an important member.

It can be a watchful dog if you could devote plenty of time and attention to them. They are good chasers and can quickly get hold of their prey. Basenjis have many characters similar to that of Pariah dogs and dingoes. They do not have any distinctive odor and cleanses itself like a cat. It makes a peculiar sound like howling and yodeling unlike the characteristic bark by other breeds of dog. It seems to have originated from the deep forest areas of the Congo Basin and hence they are also called as Congo dogs. For this reason they are used for hunting in dense forest region. Male dogs grow on an average from 41-43 cm and females are in the range of 37-40 cm. The average weight of fully grown adult basenji is anywhere from 10-13 kg.

Basenji is prone to get affected with Fanconi’s syndrome (a type of kidney disease) and has to be treated with caution. This breed can also get affected with eye problems like retinal atrophy and intestinal issues. On average, they die due to old age (35%) and of chronic kidney failure (15%) and urinary incontinence (30%) and other reasons.

Wild dogs can be the predators for Basenji dog since many times they are killed by wild wolves. Dogs can be attacked by big cats in case they are abundant in number. In Croatia there are instances where dogs are frequently killed by wolves and in Wisconsin reports show that people have received more compensation for dog rather than livestock. Big cats like leopards can be the natural enemy for dogs since they are fond of eating the dog’s flesh. Striped hyenas are natural predators for village dogs. In rare cases reptiles like pythons can kill the dogs if they accidentally caught hold of them.

Basenji dogs become sexually mature when they are 8-12 months old. But most of them engage in reproductive activities when they are two years old. Female dogs will experience estrous cycle for preparing to the stage of pregnancy. Female basenjis can reproduce 5-7 puppies in one breeding season. Often it gives birth to puppies during the same months of the year like November-December in the Northern Hemisphere and in June if it lives in Australia. The conception occurs from 2-5 days of gamete and within two weeks the embryo attaches to the uterus. Like most of the dogs, the gestation period of Basenji would be 55-63 days.

Basenji dogs are short haired and elegant looking dogs. It has a small tail with erect ears and polished neck. When they are young the forehead remains wrinkled. Its eyes are attractive but it looks as though the dogs are squinting. They are muscular and athletic and are powerful and strong for their size. It walks like a horse with confident gait with their short curled tail adding more elegance to its feature.

Basenji dogs are available in various colors like black, red, and white and brownish black. Some are tricolored having dull white colored chests and stomach. Many breeds have classic tail with either single or double curl. They do not shed their hair and hence it can be ideal dog for asthma and allergic people. 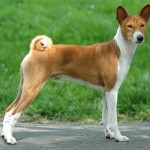 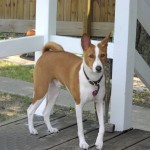 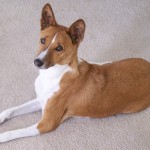 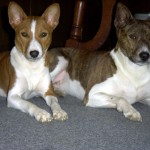 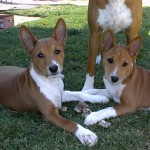 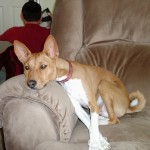 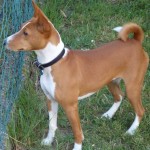 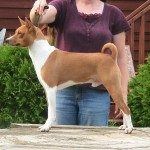 The average life span of Basenji dog is 10 to 12 years.

Basenji Dog : At a glance

• Basenji dog is intelligent athletic pet dog which has to be trained right from early stage.

• Basenji dogs do not bark; instead they howl and make peculiar noise.

• They are active and need to be kept under schedule of exercises and daily walk if you have idea of petting this breed.

• They behave like children and are hard to be trained and they need people around them.

• Unlike other dogs, they like to be groomed and behave like a cat in cleansing its body.