The great white shark popularly known as Carcharodon Carcharias, white death, the great white, white shark or pointer death belongs to the family of lamniform shark that is widely found along the coast in many oceans. Though these are one of the most dangerous animals found in the water but its attack on humans is extremely rare even when humans swim in close distance to them.

The great white shark is widely found along the coastal areas of northeastern United States, Australia, California and South Africa. In minority they are found in Hawaii, Azores, Philippines, Brazil, northern Australia, the Caribbean, Sri Lanka, north western Africa, Mauritius, eastern Africa, Madagascar and Seychelles. They like seas that are warm, temperate and salty and swim on the surface as well as 250 m deep in the oceans.

The great white sharks are carnivores in nature and prefer to eat fish like tuna rays and other small sharks, marine mammals, crustaceans, cetaceans such as dolphins, whales, porpoises, krill, pinnipeds like seals, sea lions, sea otters, mollusks and plankton. They have a keen sense of smell and can identify the smell of blood from miles away. Sometimes the great white sharks eat stuff that it can’t digest. They are very tactful and prey for food that is energy rich and has high content of fat.

Sharks reach maturity at a very late age like 12 to 16 years. The eggs are developed in the uterus of the mother shark till birth, which makes them viviparous. The birth takes place in the spring or summer including a pregnancy period of 11 months. It has been researched that the larger pups in the womb of the mother actually feed on the smaller pups. One shark delivers only one or two offspring at a time. The shark offspring is not taken care of by the mother shark and is left in the ocean to take care of itself. Since, the bay sharks are born with a full set of teeth they can take feed by themselves. 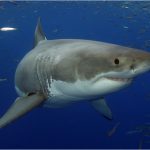 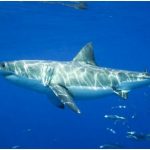 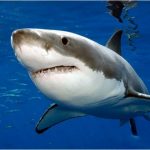 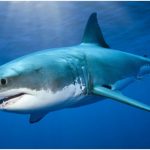 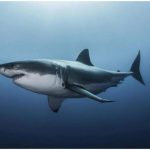 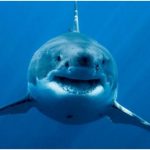 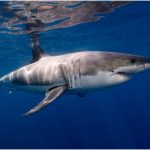