Known as the giant rodent and scientifically, Hydrochoerus, capybara is a partially aquatic rodent found dwelling in the swamp regions of Central and South America. The capybara is said to be in the same family of other rodents, like Chinchillas, Guinea Pigs, etc. also available in South America. It is the largest rodent species in the world. It weighs about 75 kg and it is almost 1.4 meters long.

Though a capybara is huge in size, it can properly swim in water. These mammals have some distinctive features that support their amphibious nature, which includes   the web-like skin. The web-like skin is between their toes that helps them swim better. It is not much surprising that capybaras are also called ‘water hogs’.

Capybaras are found in many areas of Central and South America where a permanent source of freshwater is available. These rodents can be found in regions like Panama, Venezuela, Paraguay, Peru, Colombia and Brazil. In the northern parts, they are available in Uruguay and Argentina.

They usually live in swamps, rivers and lakes. They also inhabit in grassy areas as well as rainforests where they take over certain areas in herds. These areas are reported to be adequately occupied by capybaras all the year round, no matter what the season is.

During the dry seasons, they ensure they have enough water. But in the raining season, despite the floods, they still graze on grassy banks.

The appearance and anatomy of  a capybara is quite unique when compared to other rodents. It is said to be heavy with a head and muzzle that seem short when compared to the rodents’ bodies.

It looks stocky and doesn’t have any tail at all. A capybara’s short, sturdy limbs as well as the hoofed claws on its toes assist the rodent in handling slippery banks and preventing sinking deeply into the mud.

The mammal’s tough, short fur is rather pale and dark brown with yellow highlights. Its fur tends to get dry fast once it’s back on dry land. One of the Capybara’s most unique features is the position of its eyes, ears as well as nose, which is on top of its head.

The large size and hidden aquatic nature of the capybaras as well as their slow and calm disposition make them a perfect prey for several hungry predators. Different wild animals, like Jaguars, Ocelots and Pumas are the major predators of these rodents with the inclusion of Caimans and Eagles that hunt the younger capybara from the sky. They are one of the most-favorite foods of Anaconda along with other species of big snakes.

Capybaras are also hunted down by humans for their meat along with the pricey hide. Although the population of Capybaras is not considered to be threatened in any way, their numbers in the abovementioned areas have significantly declined. The loss of habitats in these areas has also contributed to these rodents’ decrease, as they are used to living in freshwater.

What they Eat (Capybara Diet)

Capybara is an herbivorous mammal that only feeds on plants in order to gain all the necessary nutrients it requires. The foods of Capybaras mainly consist of grasses, sea plants as well as fruits and berries.

They often munch on soft tree barks. Despite spending several hours for grazing at night, they are fussy with about 75% of their foods that include 6 different species of plants. Just like other species of rodent, 2 of a capybara’s front teeth grow throughout its life.

Hence, it must gnaw as well as chew its food back and forth in order to grind it completely rather than chewing from sides. They also regurgitate their food and chew it again, which is similar to a goat or cow. Grossly, they eat their own poop to help break down cellulose in the grasses, which is also good for their digestive system. 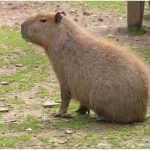 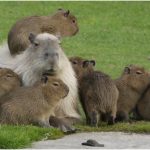 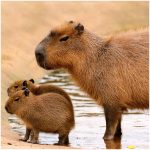 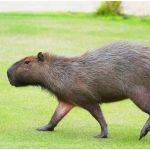 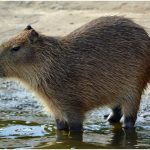 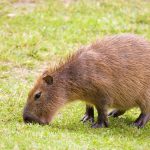 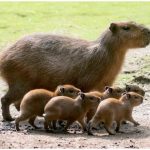 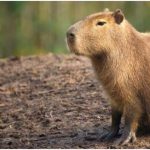 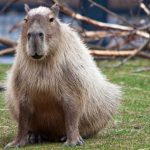 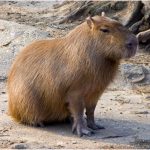 In a herd of capybaras, it is only the dominant male that has the right to breed with the females. Depending on the condition, the breeding season falls during the rainy seasons in April as well as May. However, mating can happen all the year round. After a gestation period that lasts for about 5 months, a female capybara then gives birth to a range of 1 to 8 pups.

Young capybaras are very developed from birth. They not only have fur and are able to see, but they can also swim, dive and run for hours after birth. The female goes back to the main group after a week with her newborns and then start eating grasses. However, the young capybaras continue breastfeeding until they are 4 months old. These water hogs tend to live for about 10 years in the wild and a bit longer when in captivity.

Generally, the slow and gentle movements of capybaras have helped them live with humans peacefully for hundreds of years.  Though they are not aggressive animals, they are usually killed for their flesh in certain areas. This has led to the decline of their population in these same regions.

Also some common activities of humans, such as settlements and clearing of lands for agriculture have also contributed to the decrease of these rodents. Capybaras are seen as pests, as they often damage crops in fields available in the Central and South America.

Presently, capybaras living all over the Central and South America remain averagely stable in terms of their population. Capybaras being common have made them to be listed as the least-concerned from becoming extinct in their living environment by the ‘IUCN Red List’.