The diet of chameleons includes birds and insects. They creep very slowly to prey on their food and shoot out their tongues to reach the prey. The food sticks to the tongue of the chameleon, which is twice as long as its body when stretched out. Then, it draws back the insect to its mouth and digests it with strong acids of the stomach. For proper health and growth of the chameleons, they need water. They slurp up water with their tongues.

Chameleons are found in the rain forests, deserts and savannah of Africa, Asia, Madagascar, Portugal and Spain. They live in bushes and trees while some species also live on the ground. According to the National Wildlife Federation, horned leaf chameleons live on the dead leaves spread over the forest floors.

Though there are various types of chameleons, they all have the same lifestyle. They mainly feed on different insects, like grasshoppers, mantis, locusts, crickets, etc. If they don’t find any food, they simply rely on water. Chameleons use their tongues to catch preys and their tongues are actually double the size of their bodies.

They are able to swivel their eyes to 180 degrees. A chameleon catching its prey is quite fascinating to look at, as it ejects its tongue quickly in no time, thus allowing it to catch its food easily from an adequate distance. They live mostly in trees but they also can be found in shrubs and bushes. They use their tails to stay balanced and secure on the branches of trees. The males and females interact with each other only during the time of mating.

Chameleon’s life cycle is similar to other lizards. Young chameleons mature quickly within 3 to 12 months. Most of the adult lives of chameleons are spent in reproducing and breed until their death.

Chameleons are known to reproduce sexually. They mostly live in solitary and the males and females tolerate each other only during the time of mating. These animals have a gestation period of 3 to 6 weeks after which they lay eggs. They lay eggs under the ground or in tunnels.

Male chameleons often try to impress female chameleons during the mating season by inflating their throats, swaying their heads, displaying bright colours on their skin and by enlarging their bodies. A female rejects a male chameleon by running in the opposite direction or by making a hiss with an open mouth. If a female does not like a male, it may bite and attack the male, which can sometimes seriously injure the male and even kill. 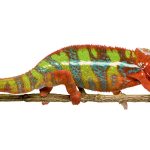 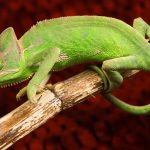 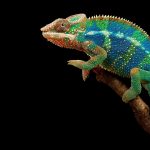 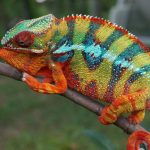 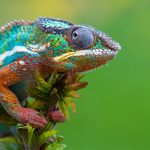 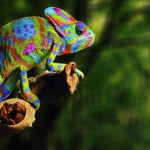 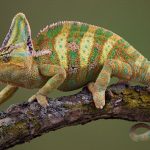 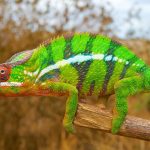 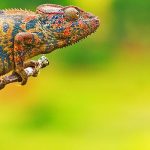 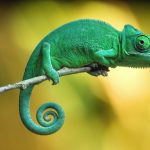 The smallest of chameleons are under one feet in length. They are found in a number of colours and have ornamental features on their face or head. The males are flashier than the females that help them find a partner during the mating seasons.

The chameleon pet species, like Jackson, panther and veiled chameleons often survive for 5 to 10 years in captivity. But in the wild they have shorter lives. Labord’s chameleons spend most parts of their lives inside eggs than outside. They live for only 4 to 5 months, but the incubation period of the eggs is 8 to 9 months. Hence, they have the shortest life span among other kinds of chameleons. These animals hatch, breed and mature at the same time. During the dry season, these species find it hard to get a perfect place for accommodation. However, male chameleons are known to have longer lifespan than females.