Sloths are mammals found in South and Central America. They hang to the tree branches with their long claws. They survive on leaves. Their long claws make it difficult for them to walk on the ground. Hence, they spend a lot of time on trees.

There are two kinds of sloths; Two-toed and three-toed. They share most of the features but vary in size.

Sloths eat leaves which are hard to digest. The leaves are digested slowly in their four-part digestive system. A sloth takes a month to digest a meal of food. Their diet is not nutritious and they do not derive much energy from it.

Sloths are considered folivores as they rely on tender shoots, leaves and buds. Two-toed sloths have been found to eat small reptiles, birds and insects as per few documentations.

Sloths are most commonly found in the rain forests of south and central America. They curl into a ball while sleeping. They also hang from the tree branches. Sloths are not known for activities.

They spend most of their time eating and sleeping. These leave trees only to swim. Sloths that have been kept captive sleep for fifteen to twenty hours per day. This leaves them with little time to indulge in social activities. Sloths prefer leading solo lives.

Sloths have flat, short head, short snout, big eyes, long legs, tiny ears and curved claws. There are two species of sloths. These have either two or three claws. These have sad-looking eyes, stubby tails and roundish heads. Two toed sloths are bigger than the three toed ones. Three toed sloths seem as if they are smiling because of their facial coloring. Sloths can turn their head around because of the two extra vertebrae in the neck.

Sloths spend a lot of time hanging from the branches of trees. They sleep, mate and eat in the trees. Their curved, strong claws help them in hanging from the branches of trees. Male sloths are shy, solitary animals. Female sloths indulge in little bit of socializing. They sleep entire day and are active during the night time. Sloths do not move until it is necessary. They defecate and urinate once a week and for this they come to the ground.

The life expectancy of a sloth varies based on the species. Most of the sloths live for 20 to 30 years. In captivity, there can survive for a longer time. The lifespan of a median sloth is 15 years.

Humans, the harpy eagle and jaguar are the main predators of sloths. Poachers and electrical lines were responsible for death of sloths in Costa Rica. A sloth can protect itself from camouflage and because of the slow movement. These features let them disappear in the canopy of the rainforest.

Sloth mate and give birth to young ones in trees. Courting begins when a female sloth screams to inform the males in the area that she is ready for mating. Males put up a fight by hanging from the tree branches. They paw at other sloths to be the winner. Sloths just have one offspring at a time. 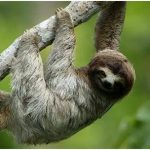 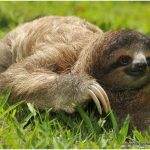 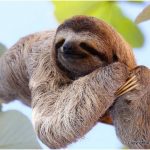 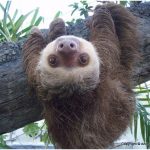 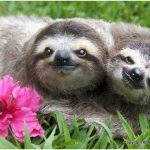 Sloths do not groom themselves. They have a dense coat of fur which grows algae. They have a greenish tinge during the rainy season because of the growth of algae. Sloths belly houses several micro bacteria for breaking down the food that they eat and thereby promote digestion.

The digestion process of a sloth is quite slow. It takes about a month for a slot to digest a meal. The metabolism of a sloth is very low. This is why the nutrients extracted from the sloths is slow and the low energy level probably the reason why they are sluggish.