Red Pandas are popularly known as firefox, lesser panda, red bear cat and red cat bear. The size of these pandas is almost the same of a housecat, though their tails add about 15 inches more to their size.

Red Pandas are widely found in western Nepal and northern Myanmar. They are usually found in mountain ranges, like southwestern China, which includes Xizang, Yunnan and Sichuan. Since the temperature of the foothills of Himalayas is moderately cool at an elevation of 5000 to 12000 feet, Red Pandas are also found there. Moreover, a wide variety of bamboo grows there, which is the staple diet of Red Pandas. So they are found there due to their dependency on bamboo plants. These pandas spend their lives high up on the trees and since they are a nocturnal species, they come out at night rummaging for food. Now there are only less than 10,000 Red Pandas left all over the word.

Being a carnivorous mammal, the diet of a Red Panda is much unexpected. They rely on insects and fruits in warm weathers, but mostly feed on bamboos. A young Red Panda prefers only soft leaves and shoots. Global warming has drastically affected the rate of bamboo growth all over the world. But in some parts of Himalayas, they are still found abundantly.

Bamboo is highly indigestible and a tough fiber to digest. Excerpting nutrients from bamboos is also hard. Therefore, Red Pandas are able to extract only one quarter of nutrients from bamboos and pass out the rest. Their stomachs and guts are not made to digest tough food like bamboo, unlike cows and other herbivores animals that have tough teeth and an extra fermentation chamber in their stomach. In winter, Red Pandas lose 10-12% of their bodyweight since their favored food is not readily available. In cold temperatures when food is short, they slow down their metabolic rate considerably and spend more than 10 hours a day looking for food. Their thick and coarse fur allows them to preserve body heat in winter. 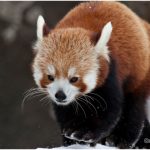 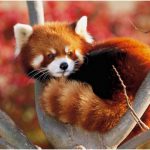 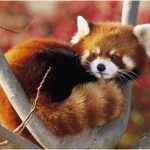 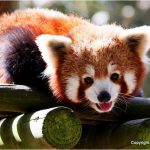 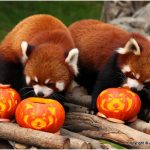 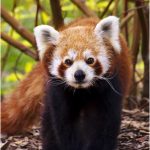 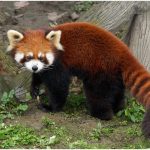 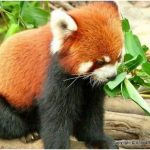 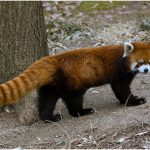 The population of Red Pandas has declined significantly because they reproduce at a very slow rate. They have a very long gestation period of 3-4 months, considering an animal that is small in size. Moreover, they weigh about 11 pounds when matured and reproduce about 2-3 blind cubs in the beginning of June and July. After 12 months or so, they reach maturity being weaned for 9 months. Young cubs often fall prey to other animals even though they are kept hidden by their mothers inside hollow trees and gaps. Red Pandas turn sexually active after 18 months. When in captivity, they can survive for up to 18 years but out in the wild, they hardly live more than 10 years.

The drop in the population of Red Pandas is caused by the habitat deficit and deterioration led by human development. Some of the reasons are bamboo uprooting for firewood, deforestation for livestock and agriculture, hunting and poaching, and so on. Young Red Pandas sometimes die because of the disturbance caused by humans to catch an animal or confrontation with forest animals and dogs. In many parts of Nepal and India, forests have disappeared completely due to deforestation, thus leading to a decline in the population of Red Pandas.

Trees serve as maternal nests and dens for mother pandas and the rapid deforestation is inhibiting these pandas to reproduce. So the reproduction speed is already very slow. This is causing fragmentation of this species, leading to less opportunity of inbreeding and genetic diversification and ultimately, extinction. Many laws have been introduced in the past 30 years against hunting and poaching of Red Pandas, causing a fall in the number of selling of Red Pandas to zoos. Saving Red Pandas will naturally help us conserve the environment we live in.