Orangutan is the only ape that can be found outside Africa. Earlier, Bornean and Sumatra Orangutan are considered as single species but researcher’s found significant differences in their DNA and differentiated them. Similar to all other apes, they are also intelligent and share almost same DNA (97%) with humans.

According to researchers, in the earlier days they were distributed all over southern Asia including southern china and India. They got separated from hominoids around 10 to 12 million years ago. Unlike the other great apes, they spend most of their time on trees and this made them interesting. Other interesting facts include:

In most of cases, they eat lychees, mangoes (when available) and figs. These items constitute majority of their diet and apart from these items leaves, tree bark and fruit are also eaten by them. They rarely eat eggs and small vertebrates. Their energy requirements are high as they are active all the time.

For water they depend on fruits and tree holes and they make occasional visits to lakes, rivers and other water sources. Based on the availability and abundance, they change their diet patterns and in the opinion of researchers, they eat close to 400 food items.

They are hunted by farmers when they reach nearby agricultural farmlands for food. Habitat destruction is one more reason which is seriously effecting the Orangutan population.

They are very active and always wander in their habitat. They play and swing along the branches of trees and they are active from morning to evening and take rest during night. Their activity requirements are high and because of lack of sufficient exercise they become obese and weigh greater than 165kgs when they are in human captivity.

Orangutans give value to relations. They are intelligent and marks boundaries representing the territories owned. They won’t hesitate to go to long distances in search of food. As they share almost same DNA with humans, they are intelligent.

With proper training they can use different tools, musical instruments and do many tasks. They are quick learners and the learning abilities differ from one to other.

As mentioned before, these animals have a low reproductive rate.Though male Orangutans loves to lead an independent life after reaching maturity, female Orangutan stays with mother and observes her mother while taking care of her younger sibling. It gets separated from mother in her teens and forms a relation with another male.

These creatures live in dangerous areas.They usually face danger from the leopards, hunting dogs, tigers, and crocodiles. Therefore, they come up with ways to defend and protect themselves.

After breeding, the gestation period is approximately 9 months. The mother takes care of its off springs until they reach 5-6 years. From here, they fend themselves.

Tough they are in black color; their pinkish mouth region can be observed from long distances also. Their broad face and short beards resemble humans. Female Bornean Orangutans weighs 30kgs (average) whereas male ones weight close to 75kgs (average).Bornean Orangutans are 1 to 1.4mts long.

Shaggy reddish fur and hair on face appear like a coat. They are seen in Black color only. Bornean Orangutans are darker than their Sumatran counterparts. Their hands are so long and strong and they can easily hang from trees and move by swinging from one branch to other.

These are creatures who can live long. They have a life span of about 40 years. This is possible if they take care and avoid danger.

They are hard to groom as they are not stable. It is better to bathe Orangutan twice a week if they are under human captivity and no other special grooming sessions are necessary. 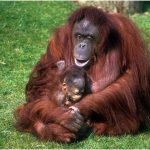 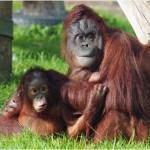 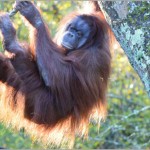 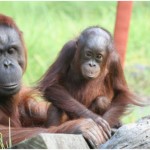 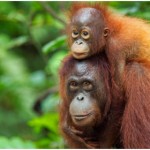 They don’t shed much. It is rare and quite minimal. This is because of its adaptation features.