The soft, vulnerable underneath body of the Aldabra Giant is protected by its enormous dome-shaped outer shell. The long neck of this giant tortoise is utilized to tear leaves and grasses from the higher tree branches. The average body length of males is 1.1 meters whereas it’s only 0.9 meters in case of females. The males are superior to females in terms of weight as well as it has weight nearly 100 kg more than the females. Legs of this species are usually thick and short with flat and round feet which help them to walk on sandy surface.

Herbivorous Aldabra Giant Tortoise is normally found to be in area known as “Tortoise Turf” which contains more than twenty species of grass and herbs. Fruits and leaves are also the common food of Aldabra Giant Tortoise. Most of the time, these creatures are found searching for food in well-vegetated environment.

The process of reproduction starts when the females lay eggs. Normally, up to twenty five rubbery eggs are produced between the month of February and May, into a shallow, dry nest ensuring its safety and protection from the attacks of its predators. It usually takes 8 months of incubation period to hatch the eggs. The growing and developing phenomenon of this species is very slow. It takes twenty to thirty years for the baby tortoises to gain sexual maturity. However, they have a long life span of about 255 years.

The enormous size of Aldabra Giant Tortoise keeps themselves safe and free from any kind of wild predators and threats. However, the domesticated animals like dogs, cows and goats are seem to be the greatest threat to them, as these tortoises have a fight a competitive battle with such domestic animals to save their foods being eaten by them. At the same time, the major climate change caused due to several unwanted human activities has pushed these species on the verge of extinction.

Due to many controversies and arguments associated with their similarity to other Indian Ocean tortoise species, these Aldabra Giant Tortoises have received four different scientific names so far. Apart from the hunting practices of the human beings, the climate change is the biggest threat to the existence of these tortoises specifies. The native islands of these creatures are in the danger zone of being sunk under the rising sea level caused by climate change.

These giant species are usually found on the grasslands and swamp regions of the Aldabra Islands in the Indian Ocean. Basically, these species love the areas of dense vegetation with adequate food supply. The Aldabra Giant Tortoise is also found taking rest in the shade or in water to cool down in heat. 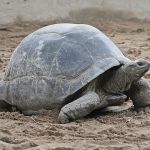 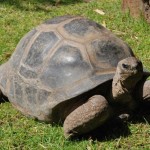 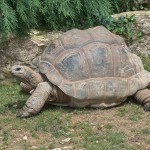 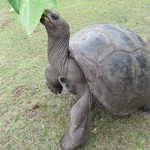 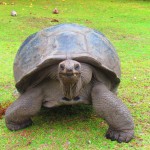 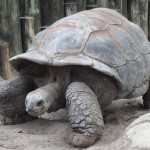 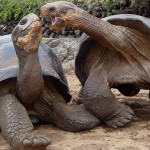 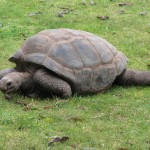 The Aldabra Giant Tortoises usually remain active during the cool morning period in search for food. However, during the heat of the day, they take shelter in the either in the shade of tree or in the shallow pool of water to keep themselves cool. Normally, these are the slow inefficient reptiles whose majority of life is spent in just browsing for food and taking rest.