Anteater is the common name given for the four mammal species that belong to the vermalingua suborder. Vermalingua means tongue and these mammals feed on ants and termites. The names for the individual species differ according to the language used. They belong to the order Pilosa along with the sloths. The name anteater is generally given to the species like numbat, echidnas, aardvark, pangolins and also the members of Oecobiidae species.

The extant species also include the Myrmecophaga tridactyla, which is the giant anteater that measures about 1.8m long along with the tail, the Cyclopes didactylus, which is the silky anteater measuring about 35cm long and the collared anteater, Tamandua tetradactyla, which is 1.2m long. The northern tamandua also has the same size measurements.

The anteaters are related closely to sloths and the armadillos are their next nearest relation. While several anteaters are extinct now, only three have survived. They are the giant anteater, silky anteater and the tamanduas.

The anteaters have snouts that are elongated in shape. They have a well formed thin tongue that can extend to such a length that is more than the length of their head. The mouth is tube shaped and has lips but teeth are not present. The fore claws are large and curved enabling the anteater to tear the mounds of ants and termites. The claws are also used to defend them against predators. The long fur gives ample protection against attack from insects. All species of the anteater have a prehensile tail except the giant anteater species.

Anteaters have special features that enable them to feed exclusively on termites and ants. Every species of the anteater has its own preferences of insects. The small species feed on arboreal insects that are found in small branches, while the large species penetrate the densely covered nests belonging to the terrestrial insects.

To avoid the defenses seen in invertebrates like sting, jaws and other features, anteaters have taken up the method of licking up large amounts of ants and termites quickly. The time spent by an anteater in a nest is less than a minute. A giant anteater has to find at least 200 nests to meet its calorie requirements daily.

The tongue of anteater has filiform papillae, which are in the form of tiny hooks. These are used to catch the insects and hold them together with the help of huge amounts of saliva. The side by side jaw movement enables swallowing of the food. The stomach of the anteater has hardened folds that contracts to grind the prey, which is assisted by the sand and dirt that is eaten along with the insects. The tongue attached to sternum moves fast and licks at the rate of 150 times in a minute.

The adult anteater males are big in size and are muscular than the female anteaters. They also have wide heads and necks. The gender specification cannot be done visually as the penis and the testes, the reproductive organs are present internally. The presence in between the urinary bladder and the rectum makes it difficult for identifying the males. The females possess a pair of mammae closer to the armpit region. The fertilization is by means of contact transfer and not by intromission. This is also seen in some species of lizards. Polygynous mating usually gives rise to one offspring, but twins can also result but they are rare in occurrence. The huge fore claws prevent the mothers from hurting their newborns and they carry the offspring with them till they become independent.

The hind legs and the tail are used as tripod by the smaller tamanduas to protect themselves from predators and they are able to use the forelimbs to flail at the attackers. The claws are sharp, long and curved making it easy for tearing the nests of insects. The thick outer cover of anteaters helps them to avoid attacks from smaller insects.

The offspring stays on the mother’s back till one year, and will get down only to nurse, and feed on the ants. Two years after birth the mother and baby split and do not meet each other. The giant anteaters are basically lonely creatures and are seen together only, when they mate or when the baby is with the mother during the first year of its birth.

Breeding takes place throughout the year or seasonally depending on the particular region they live in. The pregnancy period extends to 190 days and weaning is at 6 months. Self-sufficiency is reached at 2 years old. Giant anteater can live for 25 years in captivity.

The anteaters once belonged to a diversified group of mammals present in South America, when it was separated from the animal population in North America by geographical location. Now there are only three species remaining, the sloths and armadillos including the anteater.

Though the anteaters look similar to pangolins and aardvarks, they do not share the same ancestor but look alike due to evolutionary convergence. The anteaters have evolved long tongues, digging fore- claws and tube shaped snouts to enable them live on termite mounds. This is the reason for the aardvark being named anteater, while the pangolin is called scaly anteater and ant bear refers to both aardvark as well as the giant anteater.

Dry tropical forests, grasslands, rainforests and savannas are habitats for anteaters. Silky anteater lives in arboreal environment, while the tamanduas live in trees or in the ground near streams or lakes. Giant anteater lives in savannas. The tamanduas are found in the South and Cnetral America. 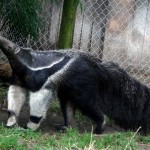 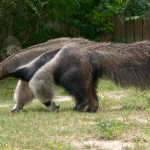 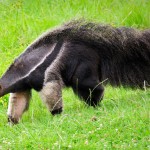 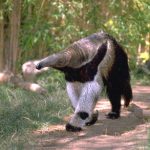 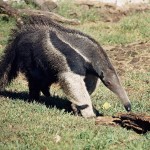 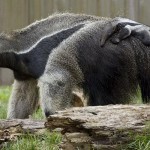 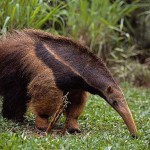 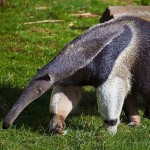 Anteaters are generally solitary animals that defend their territory that extends from 1 to 1.5 mi2. Though males do not enter the territory of another male, they enter the area of associated females. In a territorial battle they shout, swat and also sit on the opponents back and ride. Their sight is not good but have a good sense of smell, which leads them to their food and also helps in defense.