Narwhal (Unicorn Of The Sea) is found in the cold water of Arctic sea near Canada and Greenland. It belongs to the same family as whale. The only difference is that narwhal has a spiraled tooth that looks like that of a unicorn at the top off its head. An average narwhal may be 15 to 20 feet long and weigh up to 4200 pounds.

Narwhals are unique in their appearance and can be distinguished easily by their unicorn like teeth. The sword like tusk which grows through the upper lip of them may be 8 to 9 feet long. It is not sure for which purpose the tusk is there. Normally narwhals use their spiral sword like tooth to show their dominance to female and also to attack in danger.

According to recent researches, narwhal’s tusk is a sensing organ which they use to detect the change in the temperature, pressure of the water and to guess about the coming danger. The females are smaller than males and their tusk is less prominent than that of males. Narwhals also have another tooth inside the skull. Even some males have been found having two teeth.

Narwhals are found in the arctic sea near Greenland and Canada and in the Russian water. According to studies, around 90 percent narwhals in the world are found in the Baffin Bay. The major population of narwhals travels a significant distance during the changing of seasons from summer to winter.

This unique animal species feeds on fish, squid and shrimps. Narwhals sometimes also depend on Greenland halibut and arctic cod. Narwhals don’t have strong teeth like most whales, so they usually move close to the prey silently and then swallow it with force.

There is not much info available about the reproduction process of the whale, but it is usually believed that male attracts the female with their tusk and mates. A male narwhal becomes sexually matured at the age of ten to twelve years while the females get matured at about five to eight years of age. The female gives birth to the baby narwhal called calf after the pregnancy period of around 14 months. Females usually give birth after every three years. The baby narwhal moves with the mother for around 20 months.

The calf is normally 80 kg in weight and 5 feet long at the time of the birth. The male calves grow the tusk with age. Baby narwhals also change their color with age. The calf is usually blue grey, the young ones are black grey, adults are brownish and the old ones are completely while.

The average lifespan of narwhals may be as long as 50 years but they rarely live that much. They may die due to health issues or the suffocation caused by the frozen ice above them. Also they may fall prey to various predators, like polar beer, whales or orcas. There are around 75 thousand narwhals in the sea currently.

Narwhals are usually very lazy animal that moves slowly. But during danger, they can move fast enough to save their lives from the predators. Narwhals prefer to live in the shallow sea because there are enough food for them; but they can also dive up to 1.5 km deep to evade from attackers. During winters, narwhals prefer to live under the ice packed surface of the sea. The cracks in the sea help them inhale oxygen to survive.

Narwhals are found to travel in the groups of 10 to 15 members. These groups may have females and youngsters called ‘nurseries’ or the adult males called ‘bulls.’ Narwhals use various signals like sequel, clicks and trills to communicate with other narwhals. Male narwhals often cross their tusk with other narwhal’s tusk to clean them. It is known as tusking and also a symbol of friendly contact. 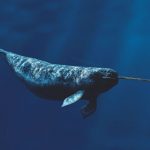 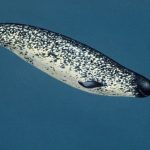 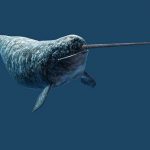 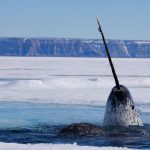 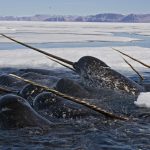 The major predators of narwhals are the polar beers and orcas. They often get caught in the ice and became unable to move and thus get killed. Killer whales often attack in the narwhal groups and such attack may cause the death of around ten to fifteen narwhals at once. Also, humans are allowed to kill this animal species legally. This adds to the difficulty for narwhals to survive as humans are the most dangerous hunters today.

Also the increasing number of marine activities and moving ships has increased the level of noise pollution greatly. Since the mammals like narwhals and whales usually communicate through various signals, these signals are distorted due to noise pollution. As a result, narwhals may face problems in communicating, get separated from the group and may fall prey to other animals easily.

Narwhals along with whales are at the top of food chain and they play a significant role in maintaining the overall balance of marine food chain. Narwhals are also culturally important for the people living in arctic. In ancient times, narwhals used to be harvested by the arctic people. But humans nowadays kill narwhals and consume their meat. Also the skin of narwhal is used in the leather industry.

The unicorn of sea ‘Narwhal’ is a unique mammal because of its tusk, but there are several other interesting facts about it:

Narwhals are a unique animal species whose existence is being affected due to climate change. We should start worrying about this before the situation gets worse.