Platypus is often referred to as the duck-billed platypus because its bill resembles that of a duck. At a glance, they don’t look much attractive and they in fact look like a badger with bits from other animals attached to it. Interestingly, people who were first introduced to a preserved body of this creature assumed that they were being pranked. Here is a detailed description of this unique species.

Platypus Facts For Kids and Information :

They are carnivorous in nature and they feed on creatures like worms, freshwater shrimp, insect larvae, dragonflies, trout eggs, frog eggs, tadpoles, mussels, small frogs and other small vertebrates. They need to consume 20% of their weight every day and this is why they spend many hours in the water. They catch their prey using their bills. Their hunting technique is very intriguing since rather than using their sense of smell or sight, they use their bills for electrolocation, a phenomenon only seen in dolphins. When muscles in their prey contract, they create a magnetic field which is picked up by the platypus’ bill.

By moving its head side to side as it swims, the platypus can tell the direction from which an electrical pulse originated. A combination of these electrical emissions and mechanical waves help the platypus determine the distance of its prey. With their eyes closed, they’ll to the bottom of a river and drag their bills across the surface to stir their prey. It then catches its prey and stores it in cheek pouches to eat later when it resurfaces. Their eyes, nostrils, and ears have a layer of skin to prevent entry by water when they are swimming. Without any teeth, the platypus uses gravel it picks up when hunting to grind its food into consumable sizes.

They are mostly found in Australia and live in burrows near freshwater lakes and streams. The female makes two holes for her family; one is deeper to protect her young ones and eggs while the other is used by her and her mate. Their burrows can be as deep as 30m.

They are mostly active early in the morning and late in the afternoon. They are solitary animals but can share small bodies of water. These creatures spend a large part of their days in water bodies foraging for food. They hide in their burrows during the day and sometimes sleep for as much as 14 hours due to their diet. They are faced with the challenge of predators, such as snakes, goannas, foxes and rodents. The males secrete venom that can be delivered through their ankle spurs. This venom can kill small animals like dogs and can be used to fend off other competing males in the same area. Another defense mechanism is their paddle-shaped tail that they use to splash water in the face of predators. The tail makes a loud disorienting splash that can scare some large predators or intruders like foxes or dogs away.

Platypuses are seasonal breeders and they mate between the months of June and October every year. There are a few outliers that mate outside this timeframe across different populations in different locations. Male platypuses can have multiple mating partners in their lifetime. The mating between the male and female happens in the water.  After copulation, the female digs deeper burrows than the ones they occupy. These new burrows’ surfaces are then lined with dry grass and leaves to soften the landing for the young platypuses when they eventually hatch from their eggs.

The mother plugs hole and tunnels at various points to defend the eggs against predators, prevent flooding as a result of changes in water levels, to control moisture and the temperature of the nest during incubation.  The eggs develop in utero (within the mother’s body) for about 28 days before being laid and developing for another 10 days. During this ten day incubation period, their vital organs develop. After hatching from their eggs, the young ones are still too fragile to face the wild. They remain within the burrows for another period of three to four months under the care of their mother; a period after which they are strong enough to swim on their own. 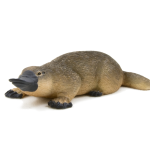 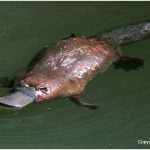 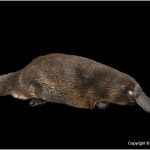 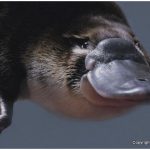 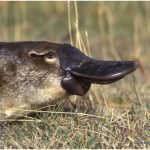 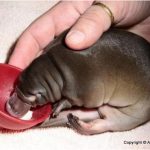 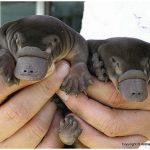 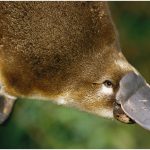 They have a round body shape that is similar to that of a badger. Their body is covered in a smooth waterproof layer of fur to keep them warm. A hard to miss feature is their flat bill. They have short limbs and webbed feet to help them swim in water. This is a disadvantage when they are on land as it slows them down. A paddle-shaped tail also used as a propeller helps them swim faster. Adults can grow to be about 38 cm long.