The Ring-tailed Lemur is a strepsirrhine primate and it has a very long white and black ringed tail that makes it distinct. They are omnivorous and diurnal in nature.

The direct composition of the Lemur’s diet varies based on seasons and habitats. It supplements its diet by the intake of sodium through consuming soil. It feeds on different types of food, including sap, fruits, bark, leaves and flowers. It also prey on big insects along with chameleons.

They are commonly found in rock canyons, spiny forests, dry deciduous forests, lowland gallery forests, and dry scrubs. They are seen in a broader range of habitats than any other lemur species. They can survive in extreme environmental conditions, including the driest, coldest and hottest areas in Madagascar.

Ring-Tailed Lemur always sleeps with its long tail curled up over its back and its nose tucked between its hind legs. Although they move from one tree to another in search of food, they are also known to spend a lot of time on the ground. One interesting behavioral fact of this species is that it loves to expose its underside to the sunlight.

Lemurs show strong territorial defense when they are threatened by a different group of lemurs. They occupy their preferred overlapping home ranges. When there are needs for confrontation against another group, the females are the ones that dominate as they get into a face off, irregular fighting or alarm backing. After this event, they retreat. Lemurs are found in larger groups which contain equal number of females and males, including their youngsters. Every group has a proper hierarchy with 3-25 individuals. The tailed lemur converses through a broad series of vocalizations. They also mark their home range using scent marks.

The most extreme threat to their survival is caused by the losing of their habitats due to deforestation, charcoal production, overgrazing and bush burning. Their conservation status is “endangered,” which means they are prone to becoming extinct very soon. Some lemurs are trapped and kept as pets in reserves, homes and zoos while some are hunted for food.

Ring-Tailed Lemurs gain sexual maturity when they are about 2.5 to 3 years old. The males contend for entrance to females through a stink fight, smearing their tails from the odor that emanates from a secreted substance from their wrists and drifting this odor towards their opponents. Mating amongst them takes place during mid-April when the male lemurs get complete access to the females after fighting off their opponents. In September, their offspring are born after 130 to 144 days of gestation period.

The female red-tailed lemurs give birth once a year either to one infant or twins. During this period, there is plenty of food available when the baby lemurs are weaned. The baby lemur is often hold tightly to its mother’s body and it rides on its mother’s back after 2 weeks when it is ready to survey its environment. Throughout the ring-tailed lemurs’ lives, they move from one group to another once every 3-5 years. The male lemurs leave their group after being matured, unlike the female lemurs. Their lifespan is between the ranges of 15-16 years. 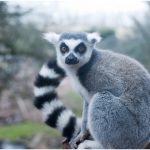 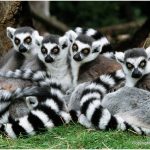 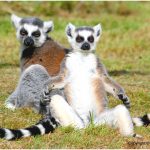 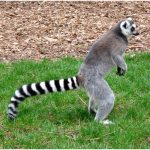 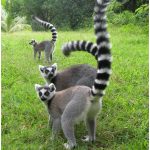 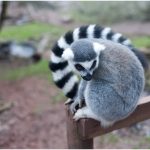 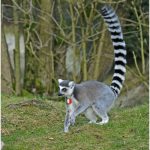 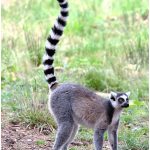 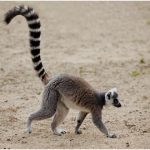 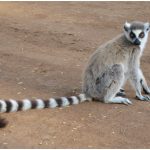 Ring-Tailed Lemur received its name from the Latin word Lemur which literally means ‘ghost’ or ‘spirit.’ It is one of Madagascar’s highly terrestrial active animals. Ring-tailed lemur is a distinctive primate with a long and bushy tail. The male and female lemurs are of the same body size and appearance. This species has a distinctive tail that is longer than the head and body, and tipped with black. A dark black skin is visible on the ring-tailed lemur’s feet, lips, nose and eyelids. The lemur also has a white colored face with patches that are triangular in shape. Around the eyes, a dark snout is visible and its large ears are nicely furred. This primate has a dense fur which is grayish-brown on the back and grey on the limbs and rump.