The Koala, commonly called Koala bear, is not actually a bear as most people mistake from their ‘wrong’ name. They are marsupial mammals that primarily live in Australia. Their closest relatives are the Kangaroo and the Wombats, and they belong to the family Phascolarctidae.

Koala Facts For Kids and Information

Koalas are herbivorous that primarily feed on eucalyptus leaves, although they sometimes also feed on the leaves of Melaleuca, Leptospermum, Callitris, Allocasuarina, and Acacia trees. In fact, the koala feeds on about 30 out of more than 600 eucalyptus species of trees.

They go for tree species with low lignin and fiber amount but high protein amount. Common Eucalyptus species that are loved by koalas include Eucalyptus camaldulensis, Eucalyptus tereticornis, and Eucalyptus microcorys. They averagely eat 400 grams of leaves per day and get most of their water from the leaves.

Koalas primarily inhabit open eucalyptus woodlands and forests. They are mostly found in the coastal regions of South Australia, Victoria, New South Wales, and Queensland.  They live in climates spanning from cool temperate to tropical. Koalas living in semi-arid climates have preference for riparian habitats where they get easy access to water streams for cooling when it’s too hot.

As a result of koala habitat fragmentation, reduction, destruction or overpopulation, they have been translocated since 1870s to offshore and coastal regions, like French and Kangaroo islands. Some koalas were also translocated to Quail Island among others.

Koalas are anti-social animals and only spend about 15 minutes of their awake time in social activities. Their families consist of territorial alpha males that stay close to the breeding females. Younger males are usually powerless and only dominate once they are fully matured.

Adult mature males always demarcate their territories by rubbing their chest gland or dribbling urine against the tree branch or trunk. When a new male comes to a new tree, they sniff the base of the tree before climbing. Males are also known to communicate by loud bellowed low pitch sounds which travel far beyond their habitat. They make sounds to attract females for mating and to alert other males of their presence in a new tree.

Koalas sleep for about 20 hours a day, an adaptation for utilizing the little energy they obtain from their food. The few hours when they are active are spent mostly eating from the same tree they sleep on. During extremely hot weather, they climb down to the lower parts of the trees which are cooler, and hug the tree tightly to avoid losing heat. On very cold seasons, they curl up in a ball to avoid losing energy.

Koalas live a low-energy lifestyle which makes people assume them to be lazy animals. Their special body characteristics help them easily adapt to their tree-life. Their social groupings are complex, with individuals maintaining their home rage after establishing stable breeding groups.

A home range includes food trees and home range trees, which also overlap with other trees ad home ranges. Their social structure and adaptation are very complex, but in a way that promotes the survival of most koalas.

Koalas breed seasonally from August to February. During this time, it’s common to hear loud male billowing. The one year old koalas also leave their home range during this time in search of newer ones where they can form their breeding groups. They sexually become active from two years and the females produce about 6 joeys in their entire lives.

A Joey moves from the birth canal to the pouch after 35 days using its sense of touch and smell, powerful front limbs and claws. When safely in the pouch, it attaches its mouth to one of the mothers’ two breasts, and the mother contracts the sphincter muscles at the opening of the pouch to keep the joey secure.

The joey develops for 6-7 months and the mother begins to wean it from milk to gum leaves using pap (especial koala defecates). During weaning, they grow rapidly and soon get out of the pouch, begin riding on the mothers back and feed on the leaves. Joeys stay with their mothers and suckle for up to a year when another generation of joey appears in the pouch, or longer for mothers that breed after two or three years.

Female Koalas start breeding when they are two to three years old, but depending on habitat quality and age, they can breed yearly or once every two to three years. The gestation period lasts for 35 days, after which a two centimeter long and less than a gram joey is born. The joey is blind, has no ears, hairless and looks like a jellybean.

Koalas actually look like teddy bears. They have grey fur and their chest is cream-colored. Their feet are strong and clawed. They are chubby with a round head, small dark eyes, large nose and large hairy ears. Adult male Koalas are larger than adult females, but most females have a pouch. 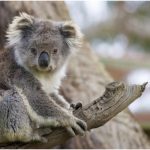 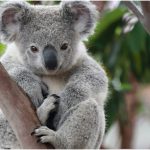 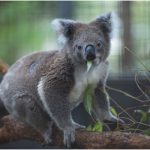 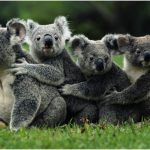 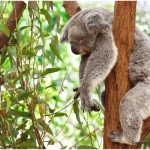 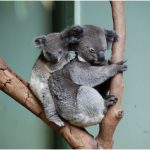 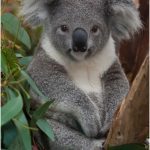 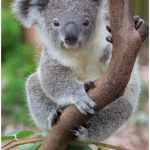 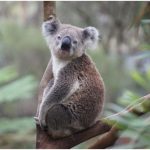 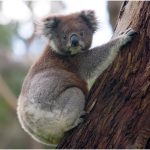 Koalas live in the wild for about 13 to 18 years and the males die earlier than the females. They die mostly from starvation, predation by large birds of prey, large pythons, and dingos. Accidents and human activity also threaten their lives to a great extent.

Koalas begin losing their chewing tooth at about 6 years. The cusps eventually disappear and the koalas may die from starvation. They are susceptible to four main diseases caused by chlamydia.

These include reproductive tract and urinary infections that may result into female infertility, pneumonia, and conjunctivitis which causes blindness. In addition, they suffer from skin cancers and leukemia.

Koalas have five digits on each of their front paws, two of which are in the opposite directions. On their hind paws, the second and third digits are fused together forming a grooming claw.