Doberman pinscher is a German breed of dog developed in the 19th century. It was developed in Germany as a guard dog. He is a mixture of many ancient breeds including Rottweiler, Black and Tan Terrier and German Pinscher. Doberman pinscher is a royal and aristocratic dog who is intelligent and energetic by nature. This dog is suited for military work and police quarters. They make wonderful guardian dogs and family companions.

The historical facts about the Doberman pinscher are vague and unclear. However, there is a story about a German man named, Louis Doberman. He had a job of collecting money that was dangerous as bandits and thieves would always obstruct his way. He always took a dog along with him and soon started breeding dogs for companionship and protection. The result of his experiments was Doberman pinscher. He was a mixture of many breeds of dogs such as Rottweiler, Black and Tan Terrier and German Pinscher.

Doberman pinscher is the bravest, quickest, smartest, and fastest breed of dogs. They are highly intelligent and affectionate towards family. They can become aggressive and violent due to their headstrong breeding nature. They are extremely protective towards their families. During the World War 2, these dogs declined in huge numbers as they represent aristocracy and royal upbringing. Not everyone could have afforded to keep these dogs as people were starving for food.

A Doberman has a fierce and strong personality. They are extremely intelligent and active dogs. These dogs are extremely loyal and trustworthy. They are also playful and affectionate with the family members. This dogs likes to keep him busy all the time physically and mentally both. They need new challenges and ongoing activities to carry on every day. These dogs need social exposure from the early puppy days.

Dobies are generally healthy and happy dogs. However, all breeds are sensitive to certain health issues. Before buying a dog, one should be careful about getting all tests done. 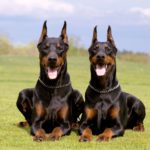 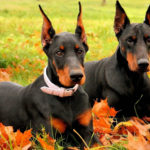 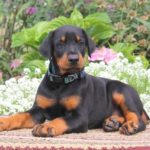 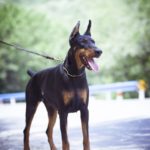 Doberman is a clean dog. They do not need much grooming. There is a reason they are referred as an aristocratic dog. The coat is short and close to the skin. Ears should be checked weekly for bad odor, redness or swelling. Dog toenails should be cut carefully as it can cause bleeding. Eyes should be checked regularly so that they do not develop any kind of irritation or infection.