Dingo the ‘wild dog’ is a half-dog, half-wolf canine native to Australia. Scientifically termed Canis lupus dingo, these wild canines play an important role in the food chain in their habitat, and are said to be the apex predators.

It is not clear where the main origin of this dog is since they arrived in Australia about 4,000 years ago, which is rather recent compared to other animal and human migration dates. One theory is that they must have accompanies Indonesian Seafarers (the Lapita and Toalean people) to the Australian shores, where they were subsequently abandoned.

The diet of these wild dogs is one of the most diverse in comparison to that of most animals. These apex predators feed on more than 170 species of game, ranging from small animals like insects, the common wombat, agile wallaby, magpie goose, red kangaroo, and the domestic cat to medium sized or large animals like crocodiles and even buffaloes. Some breeds even feed on grains, nuts and fruits as a secondary source of food.

However, these pure dingoes are rarer to see on mainland and it’s feared that the continued pollution of their gene pools as a result of inbreeding with dogs is eroding their adaptation to their natural habitat.

Although dingoes are thought to be solitary animals, they actually have a social organization consisting of about 3-12 members of a settled pack, depending on the habitat and size of prey. A dingo pack consists of a dominant mating pair, the offspring’s of the current year, and sometimes offspring of previous years. They have a dominance hierarchy between the males and females and even within individual sexes.

Dingos are nocturnal animals and mainly hunt at night. Adult males mainly hunt alone and can forage more than 60 km at night. When food is plenty, the dingoes will sometimes feed in their local packs. Like most canines, dingos burry or hide their left over food for later meals. They have clearly defined territories, and even when these overlap, they stick to them.

The mating pair in any dingo pack is partners for life. Young dingos find their mate at about 3 years. They are always the dominant members of a pack and mate once a year between May and July (winter).

The gestation period is 63 days and both males and females take responsibility of the pups for about a year after which they are big enough to begin hunting on their own. Their death will result either from predation by other dingos, larger animals or humans. Naturally they live for up to 13 years, maybe longer in captivity.

Being apex predators (top of the food chain), dingos lack natural predators. They are occasionally preyed on by crocodiles, killed by dogs, other dingos and also humans.

The gestation period of female dingo is 63 days and their litter size is from four to six pups. The dominant breeding mates in a pack are the only ones that mate, usually once a year and the other members take care of the pups.

Pups are weaned by 6 to 8 weeks although they may stick around with family for up to one year, and even afterwards occasionally turn to their mothers for refrigerated food.

The Australian dingo has a broad head, pointing muzzles, and triangular but sharp ears. Their eyes color varies from brown to orange to yellow. Their sabre-form tails are mostly in an erect curved position on their back. The coat of a dingo is dependent on the climatic characteristics of its habitat.

Australian dingos mostly have a short, soft coat with bushy fur on tail. They are reddish brown to sandy sometimes with tan patterns of light brown, white or black. Purely black dingos are rare in Australia but have been spotted in Asia. Their general gaze is sharp and watchful, yet elegant.

Dingoes will naturally live for up to 10 years in the wild, and about 13 to 18 years in captivity.

The wild dingo is a free wondering generally strong and healthy animal. Both the pure ancient breeds and the hybrids are not known to suffer from any serious health deficits or genetic deformations. 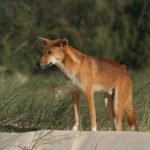 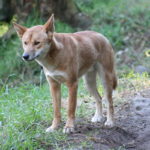 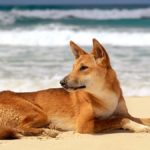 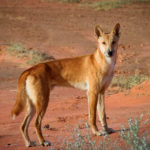 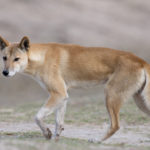 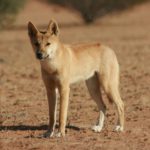 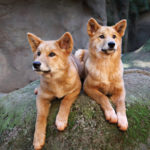 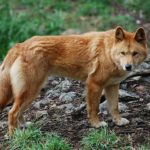 The dingo is naturally groomed with an easy naturally clean coat. They don’t exhibit any odor which makes them easy to live with. However, their natural instinct is wild and people who decide to domesticate them are advised to let them roam freely in a secured fenced yard.

They exhibit moderate shedding which might require owners of domesticated breeds to occasionally brush their fur.

The dingo dog is shy towards humans but with training can get very comfortable in human families. They love cool temperate climate and start being active at about dawn or dusk. They are mostly alert at night and that’s when they do most of their movement.

The breed may be hard to domesticate after they have reached adulthood, although pups raised around human children are sociable and obedient. The breed is highly intelligent and independent. They are good tree climbers and domesticated dingos love to stay in companionship with other dogs or dingos. They fear water due to their inability to swim.