Catahoula Cur is a pure American dog breed with its taller height and huge appearance. This dog has several names, but Catahoula Hog Dog and Leopard Hound are two extremely popular names. When you look at the introduction of Catahoula Cur, you will find it the best herder cur that can help you in protecting the cattle and your home. Further, it is a wonderful hunting dog with its fastest speed, sharpness, and active body. It runs like the leopards and can jump on its prey very fast. It is also known as the “State Dog of Louisiana” in 1979.

There are many theories and animal reports on the look, body, performance and life of Catahoula Cur. Basically, there are many unknown facts and information about this herd and hound dog. Some of these facts are;

You should never build false perceptions and considerations about the diet of Catahoula Cur being a taller and stronger dog breed. It uses casual diet, but if you give it diet with proteins, carbohydrates, iron, potassium, calcium and vitamins, then it will grow better and faster. Secondly, it needs two things; the balanced diet and regular exercises to live healthy as well as longer.

There is an interesting fact about the living conditions of Catahoula Cur. These dogs are divided into two categories; one likes living in an apartment and open spaces simultaneously, while the other is comfortable just in outdoor places. However, the smaller Catahoula Cur can be adopted as the pet for families and children.

Being a hunting, herding and cur dog, the most people consider Catahoula Cur as the furious and dangerous dogs. In fact, the reality is different. These dogs are very gentle, calmed, relaxed, patient and energetic. Secondly, these work hard and actively when hunting, but their attitude at home and with the children is always notable and appreciating.

The average life of a Catahoula Cur may be 12 to 13 years depending upon the environment, food, health conditions and other factors. However, there are some dogs from the same category or group that can live up to 14 years if they are living in their ideal locations and climate. Furthermore, the dogs having regular exercises live longer than the dogs as the pet.

Everyone in the world has a different perception about the habit and behavior of Catahoula Cur with the human. They consider these are harmful dogs that may bite or attack the children due to their name and appearance. In fact, these dogs are friendly with humans and they don’t act like the misperceptions of the people. However, these dogs are more energetic, fearless and active when they go for hunting.

The breeding capacity of Catahoula Cur is a bit higher and better than rest of the dogs. These dogs are easily available in the America, especially in Northern areas and states of the USA. However, the litter size of Catahoula Cur is up to 8 to 12 puppies. The price of each puppy may be $600 to $800.

There are several perceptions of the pet owners and dog trainers about the lifespan of Catahoula Cur. Usually, the most agree that these dogs live an average life about 12 to 13 years. However, in some areas of the USA, these hunting dogs may live over 14 years that would depend on the living conditions, diets and the physical health of Catahoula Cur.

There are n international reports and assumptions over the origin as well as the history of Catahoula Cur. The most people in America consider that these dogs belong to the Nordic Wolfhound and these dogs were in excessive quantity when the Spanish arrived almost 5 to 6 centuries ago in the North America. However, it is strongly believed that Catahoula Cur was mentioned in the State of Louisiana in 1979 and it became the dog of the state. Further, Catahoula Cur may also have some critical and very risky diseases. Usually, it comes with some genetic disorders like deafness. Other health problems of Catahoula Cur are;

These dogs have more health complications. So, regular brushing and grooming may help you to prevent the bacterial and infectious disorders. Secondly, the grooming needs for a Catahoula Cur are minimal, while the nails must be trimmed twice to thrice a week, while the daily teeth cleaning is also compulsory. You can use a bath just twice or more every year.

Catahoula Cur may suffer from the shedder due to nervous, some internal infections and other reasons. The people always use different shampoos and products to clean the coat of Catahoula Cur. It may be a little risky for the health of these dogs. Secondly, these dogs get infected in the rainy seasons and around the contamination, especially the animal’s remaining and bodily fluid. 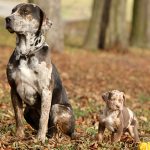 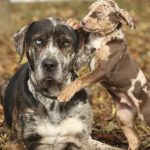 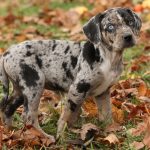 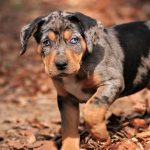 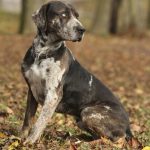 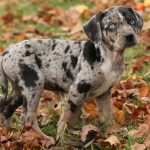 The Catahoula Cur is completely socialized with the people. It is protective, territorial and independent. These are much caring, protective and friendly with the families they live with and become little angry and rigid with the strangers. The look and appearance of the Catahoula Cur with tags and colored spots on the body make it like a leopard and very famous dog breed in the USA.

Catahoula Cur has a lot of qualities, features and specific characteristics that declare it a unique breed of dog. It generally owns follow characteristics.