The African Civet is a type of African Viverridae and exist in sub-Saharan Africa. Nocturnal, they spend their nights hunting prey and their days sleeping. What makes them distinct is their coloring. They are black and white striped.

They also have a black circles that encompass their eyes giving them the appearance of a raccoon. They also are known for their large backends. They are unique because they are able to give off a scent that spreads wide to mark the territory for which they claim.

They normally have a lifespan of 15 to 20 years. These animals give off something through their perineal gland that is known as Civettictis civetta which is what the animals are typically targeted for. The very same scent that they give off to mark their territory is one that is used as perfume base for many human products.

The glands used to produce the substance are bigger int he male species than in the female and they produce more secretion. Known as Musk, it is something that has been used throughout the centuries, and although alternatives have been found, it is still used in some cosmetics around the world.

The average weight for an African Civet is 15 to 44 pounds, having a lot of variation and their length is usually about 13 to 19 inches. They have a very elongated body which makes them appear to have stubby little legs. Other defining characteristics are their short thick neck, small ears and a muzzle that comes to a point at the end of it. Small beady eyes surrounded by black circles and a very long bushy tail make them different than any other animal around.

Just like humans they have five digits on their paws, but the first of those is set way back from the rest of the paw. They have a good set of teeth which makes them suitable to be carnivores totaling 40. The African Civet is covered with wiry, snarly fur and it can range from red to yellow, but commonly also has spots, stripes or blotches of different colors like brown or black.

They live in the sub-Saharan Desert. 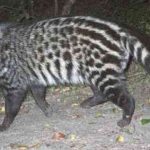 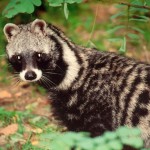 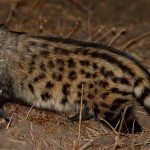 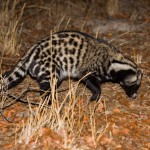 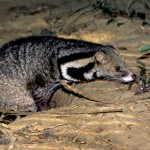 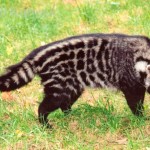 It is a carnivore which means that it primarily eats. Usually feasting on the eggs of other vertebrates, it is also capable of eating venomous invertebrate beings such as snakes and other reptiles.

Mating for this species is during the hot and wet months of the summer between August and January. The female is responsible for creating a nest for the young and does so in the rich vegetation to hide offspring from prey and to keep them safe. Normally she will not do the work herself, instead opts to find abandoned holes that have been dug by other creatures and left behind. The species is kept replenished by the females ability to have up to three separate liters within the course of one year. They normally only produce one to four young at a time, which are born at a more advanced stage than other animals, more mature and able to survive outside of the mother.

When offspring are born they are born with short fur, and dark, and can crawl from the time that they are birthed. After only 18 days they are able to venture out into the world on their own. Although able to leave the nest, they are still reliant upon their mother for milk and need her full protection for at least another 2 months.