The African Forest Elephant is an Mammal that lives in the Congo Basin. Although it was once presumed that all Elephants were of the same species many theories have come along to disprove the assumption. It is thought to actually be its own Elephant species and one of the three which is the smallest of them. In being part of the Elephant species, however, it is consider the third largest animal on Earth. Because of their smaller size it is theorized that they have in the past been mistaken for pygmy Elephants of a different species. Full adults can be as little as 1,980 pounds. They are the species that was thought to carry Hannibal in the war across the alps during the Punic wars.

African Forest Elephants can live for up to 70 years.

What makes the African Forest Elephant different from the other species is that it has a narrow, small, mandible and round shaped ears. Also, it has a tusk that is straighter and tusks that point downward which is completely different than the African Bush Elephant. The African Forest Elephant is much smaller on average in size and rarely reaches a height more than 8 feet tall. This species of Elephant normally has five toenails which is one more than you would see with an African Bush Elephant.

Although hard to imagine because of their size, they are herbivores. They eat only plants, grass and leaves. Some with eat fruit and bark, while a small number will eat mineral licks.

They exist in the sub-Saharan desert. 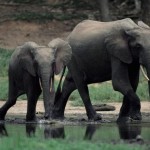 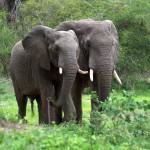 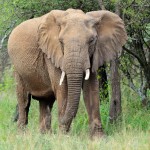 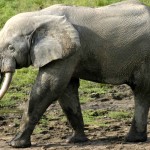 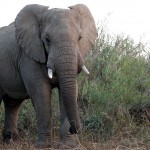 Elephants live in herds where there is one matriarch, or mother, elephant who is responsible for the entirety of the herd. She is the one who guides their migration and leads them to fertile lush landscape and water. Because they require so much vegetation, they are constantly on the move. A male elephant will remain with the herd until they reach adolescence and then will leave to find a suitable herd of “bachelors” to travel with. They will not return to the herd until a time when they wish to mate. They will hear the mating call from a female and fight against the other males to be the victor. Once they have mated, however, they will return to their solitude lifestyle.

Elephants are social creatures being very involved in the life of one another. When they greet another Elephant they will instantly know if they are related and will treat the elephant as such. When a female within a herd gives birth all the other elephants are around to give congratulatory touches and when one dies, they stay with the corpse for an extended period of time as if grieving their loss. They are also highly intelligent creatures who have great thinking capabilities and reasoning skills.

Elephants in general are often hunted for their tusks, and over the past couple of decades poachers have put them into the endangered species category. Ivory, the material that their tusks are made out of, is no longer to sell, or to trade.