Of the two species of Elephants, the African Bush Elephant is the larger. Although lumped in with the other species, the African Forest Elephant, they are two separate species. They are the largest living animals on the planet with some being as tall as 13 feet. Average males Bush Elephants are 10.8 feet tall and females are 9.2 foot. They have very distinct long ears which they use to cool themselves down. Their trunk is part of their nose and upper lip which is different from Asian Elephant species. The trunk of the African Bush Elephant is for communication and to handle getting food to their mouths. They have a larger tusk and incisors that continue to grow throughout their entire lifespan. The large incisors are used in many ways for protection, digging and feeding themselves.

An African Bush Elephant can live as many as 70 years.

They are herbivores which means that they only eat plants and vegetables. Depending on where they live, they feast from plants and indigenous grass available to them. They have large molar teeth that are used to grind down the food that they eat. When the molars are worn down, they are replaced. Being as large as they are, the average elephant consumes over 500 pounds of food per day. After covering much land during the day they also drink as many as 190 liters of water daily.

There are two distinct species of elephants, although the assumption is made that they are all the same. The African Bush Elephant is a highly social animal, the biggest known, that travels in herds that exhibit the same behavior as the family unit of humans. Being powerful and beautiful, they are protected from poachers and hopefully will continue to thrive for centuries to come.

They live in the sub-Saharan terrain. 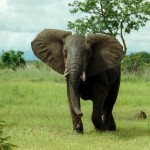 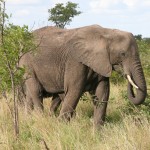 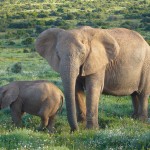 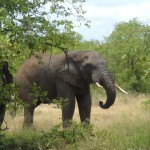 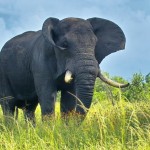 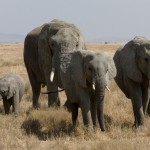 Herds to elephants are like family. The herds are species that are all related to one another. The eldest female is known as the matriarch and they start a herd with a male who usually leaves the fold when they are in adolescence. The male elephant will normally branch out and make another herd of bachelor elephants of those who are the same age. Adult male elephants will normally live a solitary life and frequent the herds only during mating season to procreate and then will leave to be on their own once again. Like humans, elephants do not leave the safety of their family and are able to recognize them among the other elephants.

The matriarch of the herd is responsible for finding water for everyone and makes the route which everyone will take. When another female gives birth, everyone lends encouragement and welcomes them into the herd by touching the trunk at birth and when an older elephant has died the herd will stay with the dead body for a considerable amount of time to pay homage.

Mating can be anytime of the year. When a female is ready to mate she will send out infrasounds that are attractive to the male elephants, the sound travels a considerable distance, and causes the adult males to make their way toward her. Sometimes fighting will ensue among them and injuries will result. The female will accept only one mate by rubbing her body against him to indicate that he has been chosen. The gestation period of an elephant is 22 months and the baby usually weight about 100kg at birth.

Because of their size and their ability to be aggressive, there is no real predator for the elephant besides humans. The calves before fully grown, however are susceptible to lions and crocodiles. Humans are known to be of the greatest threat to elephants. They are desirable for their tusks, but over recent decades because of the declining population of them, they have been under special protection to save them from extinction.