An Afghan hound is one of the longest domesticated dog breeds known in existence. Originating in Afghanistan and the cold weather region of Iran, it gets its characteristics from the mountainous and harsh weather terrain. It goes by many other names such as Taxi, Balkh hound, Barutzy hound, Kabul hound or mistakenly the African hound.

Afghan hounds have a lifespan of about 12 years which is a little more than average large dog. The most common cause of death within this breed is cancer, old age and cardiac problems. They have high sensitivities which makes them more susceptible to allergies. And low levels of body fat. They are prone to rare conditions such as lung torsion, which can lead to fatalities or expensive surgeries, but they also have a susceptibility to anesthesia problems which is a double whammy for their overall mortality rate.

Genetics have dated these dogs to being one of the first discernible domesticated dogs in existence. The origins of the specific dog breed that we see today is actually directly descended from 1920 in Great Britain. Known as a sighthound, the breed that exists today is a variation of those which have traveled the Earth for centuries. They were originally bred as hunting dogs, and others as guardian dogs for home protection. Although thought to have an ancient history, most of the research is speculation at best.

They are one of the first breeds to comprise The Kennel Club being known long ago as “Persian Greyhounds”. Because of their exotic look, they have gained in popularity, covering many continents and beloved by different cultures across many borders and generations.

The Afghan Hound is considered a large breed, with the average hound standing about 24 to 29 inches high and weighing between 45 and 60 pounds. Their coat consists of many different colors, but most have a white distinct marking in the coat usually around the head with a black face mask. There is a type of Afghan hound that has markings around the mouth that resembles a mustache, they are called “mandarin” variety because of their distinct appearance. They have a long fine coat that is high maintenance, and can become ratty and dirty easily leading their owners to have to devote considerable time on grooming them. 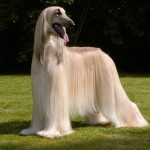 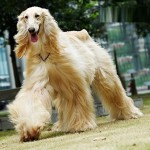 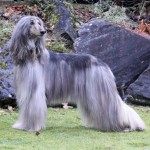 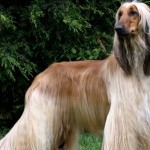 The reason why these dogs continue to be so beloved is because of their temperament. They are described as dignified and standoffish, but they are normally easy going and will engage in play when provoked. Because of their competitive nature and need to hunt, they may not be suitable in homes which have smaller dogs. They are highly competitive and intelligent, with amazing reasoning and thinking skills, making them a great companion for adults. They score very highly on obedience and intelligence scales which is why they are considered great hunters.

There is a reason why the Afghan hound has been around for so many centuries. They are highly intelligent and are able to reason with great capacity, unlike other dog breeds. They were originally bred for hunting and working, but mostly they are just loved as a companion. There is much debate about their original origins, but what is known is that they are one of the longest surviving domesticate dogs. Perfect as a family dog, but not very good with other, smaller breed dogs, they are calm, confident and although not high energy will engage in play if they are provoked. A larger dog, they have a life span that makes them the perfect choice for a dog that will be around making you happy, for a very long time.