Boxer is a medium sized dog breed that is very popular with families because it is affectionate and fantastic around children. This breed is suspicious of strangers but does not act aggressively, making it one of the most popular dog breeds to have as pets.

Though the modern Boxer has a short history, this breed originated in Germany from the Bull breeds, such as Bull Dogs. These dogs were mainly used for hunting and later to keep cattle in line. The Boxer as it is known today was first bred by a man named George Alt and it is not quite sure if the name was confused with “Bullen Besser” or “Beisser.” The reason why it could be confused is that Beisser would refer to the dog’s unusual way of fighting with its two front feet.

Boxers are fun-loving dogs, very affectionate and not aggressive. They rarely will provoke a fight with other dogs but if they have no option, they will never back down. They are very agile and love playing whether it is playing fetch or any other canine sport.

They are very friendly in nature and that is why they are great with children. They do need constant training and at times can be frustrating because they don’t always take it seriously. As an owner, you need to exercise patience if you are going to own a boxer. They love being involved with the family and do not like being excluded and left on their own.

Boxers are shorthaired and the usual color is either tan or brindle, though there are also white boxers. These are often believed to be albinos but that is not the case. The only reason they were not common in earlier times is that owners killed them. They are however prone to sunburn. The Boxer is a big dog with an unmistakable worried look and square jaw.

Boxer are very prone to disease and some of the conditions they commonly suffer from are :

Since this breed is prone to various diseases, when you decide on getting a puppy make sure that you buy it from a reputable breeder. Genetic testing has been done on Boxers for some time now and a reputable breeder will have all the necessary tests done so that they know if the puppy will be susceptible to them.

This breed has smooth short hair and is easy to groom. A weekly brush with a steel or rubber brush should be sufficient to get rid of all the dead hair which could end up on your furniture. Cleaning inside the ears should be gentle so as not to push the gunk further in. Washing the dog can be done as frequently as necessary but because of the short hair will only need a bath occasionally.

Boxers are big dogs, weighing up to 70 pounds. So follow any diet that is suitable for big dogs and do not overfeed the dog which may cause obesity. 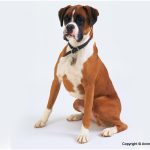 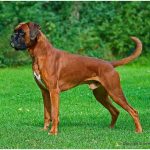 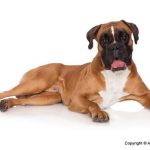 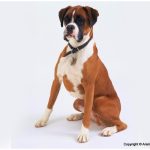 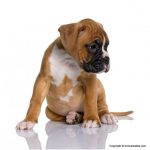 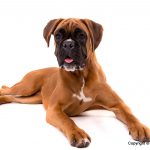 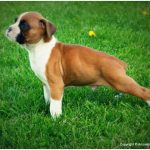 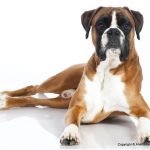 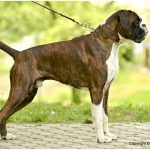 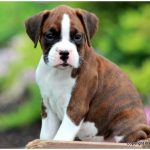 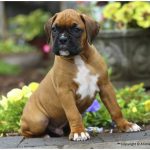 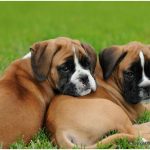 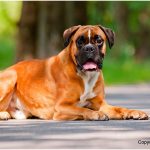 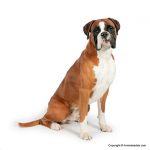 Boxer does not have a history of hunting but rather that of herding cattle and sheep. Therefore, it is not a predator and can do well with most animals, such as cats or any other pets that might be in the household. As a pet, Boxer is perfect for families that have young children and have a lifestyle of having friends come around often. They are playful and at times can be uncoordinated making them look clumsy which results in a lot of laughter.

They often do silly things and if they are left alone and not entertained, they can cause a lot of damage in the home through boredom. This is one aspect of the Boxer personality that a person needs to avoid. Boxers are loved all over the world because of the character they have. But they also display aggression and protectiveness when the situation calls for it.

In summary, if you are in search for a pet that will entertain and guard the whole family then you cannot go far wrong by considering this adorable breed.

Boxer is a great pet but as an owner, you must be prepared to train it constantly and be able to laugh at the stubborn streak that the dog often displays. It needs to be walked regularly to avoid it getting bored and causing damage. It enjoys any type of canine activities, such as playing with a fly ball is a great way to keep it entertained.