Banded Palm Civet which is also known as banded civet is a rare species of the civet found in the tropical forests all across the South-East Asia. The species are known for their tan and black striped coats that help them to camouflage in the forest.

They are found in the tropical jungles and the rainforests throughout the South-East Asia including Thailand and Burma. They are affected by the deforestation as they lose their natural habitat.

This small mammal belongs to the Viverridae family. The three subspecies of the banded palm civet were found in Sumatra, Broneo, Peninsula, Thailand and Burma. The species lives in high altitudes and inhabits peat swamp forests, acacia plantations and tropical rainforests etc. Their population is fast declining due to deforestation and uncontrolled hunting. 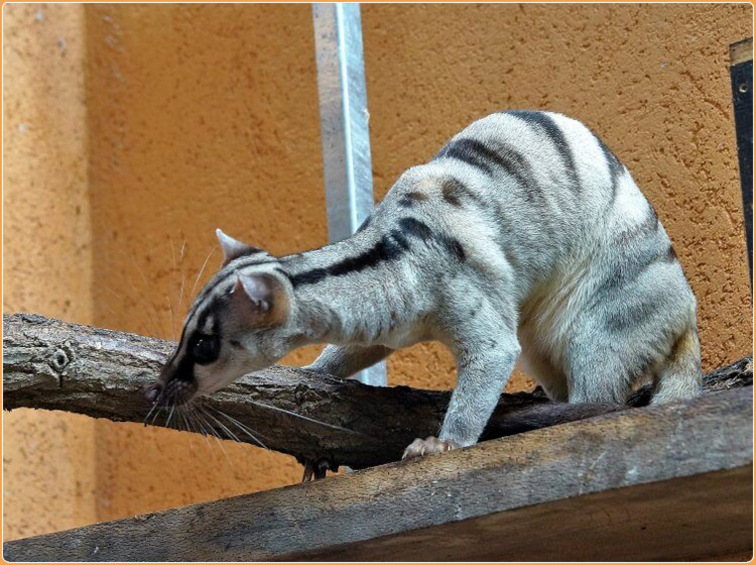 It is a cat-like carnivore that has sharp and retractable claws. It has a typical buff-colored coat with dark and broad bands all over the back and the base of their tail. A narrow stripe passes from the nose of the animal to the nape of its neck. The hairs of their coat points backwards and in the back of their neck they point forward. Their color of the coat varies. They may be yellow, grey, beige etc. with pale under parts.

Banded Palm Civets have a body length between 46-50 centimeters or 18-20 inches. They have a long and distinct tail which is roughly 33 centimeters in length. They weigh between 1-3 kilograms and have big and prominent eyes. They have a distinct short and dense coat which is buff in the color and contains 4-5 dark bands on their back.

They appear like a cross between a weasel and a rat. They belong to a group of carnivores which are not very well known. They are solitary night hunters that are well-equipped with the tiny teeth which are meant for eating and for catching small prey like insects, crustaceans and worms.

They love to eat the flowers and fruits of the mangoes, palm and coffee which are their natural habitats also. They can catch the larger prey by biting at the back of the neck and then shaking it with force.

They have sharp front paws which help them to grasp their prey, to tear them, chew them and swallow their heads tilted upwards. Primarily they feed on insects but eat amphibians, arthropods, terrestrial worms and crustaceans etc.

Breeding and Young Ones

All the species of civets give birth to 1 or 2 young ones. They have a long nursing period which runs to 70 days approximately. Though there is hardly any information available on their reproductive behavior since they live in the wild. Some of the observations made in the captivity show that the young ones born to them are hardly able to crawl.

They have folded ears and closed eyes that take 8-12 days to get open. Young ones are carried by the females in their mouth. Their young ones can walk after 18 days and after four weeks they were able to climb trees and after about 10 weeks they become fully independent.

They are arboreal in nature and prefer to live in tall forests. They are very proficient in climbing but they are nocturnal and can be seen only during nights and during day time they live in holes dug by them. 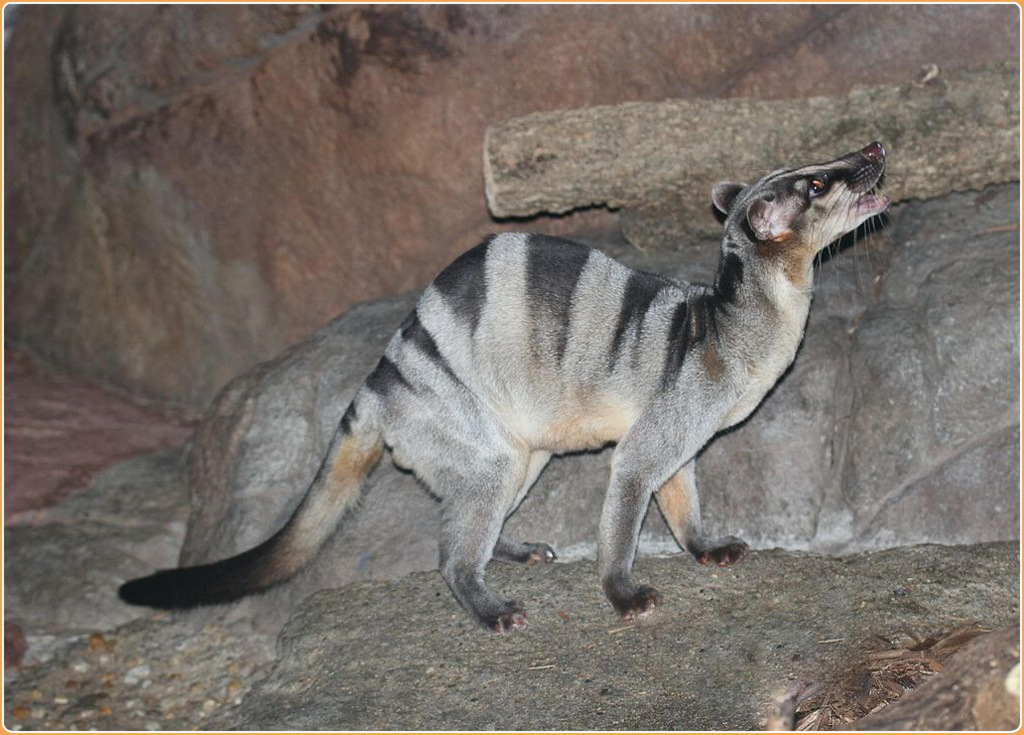 Threats Faced By The Banded Civet

The most important of all dangers to this breed is deforestation and habitat loss. They are found in very high number in the logged forests than in the small primary forests. Hunting is another big threat to the species since it is mainly terrestrial and they are likely to be caught in the traps and snares. In some of the areas of the world it is hunt for the food.

They are protected in some countries throughout the range that include Thailand, Indonesia and Myanmar. They are found in several reserves and national parks like Similajau National Park in Sarawak, Mount Kinabalu National Park in Borneo, Temengor forest reserve in Malaysia. Since it is an endangered species, trade in this species is restricted.