Australian terrier is a small terrier dog breed originally developed in Australia. It is a smaller breed weighing around 14 pounds. They are also thought to have ancestors in Great Britain which were known as rough coated type terriers. In early 19 century they were introduced in Australia. They became recognized as Australian terriers in 1892. This breed is known as one of the smallest in terrier groups and often affectionately called ‘Aussie’. As watchdog and companion animal, they are used popularly around the world.

Australian terriers are short with shaggy harsh double coat. Average height of this breed is 25 centimeters at the withers. A ruff is present around the neck and fur is much shorter on muzzle and feet. They are sturdy, short legged terriers with long head and pointed V-shaped ears. Eyes are usually brown with keen interest. Fur length is medium (2-3 inches usually) and color varies from shades of blue to red. There are also markings on face, ears, body and legs. Common coat colors are blue, tan, solid red and sandy. A topknot is present at the top of the skull. Their body is a little longer with deep chest and small cat like feet. Nails are black and puppies have their dewclaws removed. They have short tails, traditionally docked in young age.

Dietary habit of Australian terrier is like other terrier dogs. They like meat. Commercial diet can be given too. A balanced ratio must be maintained in order to avoid obesity related problems. Constant monitoring of the feed habit is necessary. Adding of fresh, raw food helps to maintain a normal bowel and therefore sufficient quantity of raw food should be provided in addition to the feed additives.

Average age for puberty in Australian terriers is 7 months of age. Average litter size for Australian terriers is four. Origin of this breed is rough coated terrier. They also shares ancestry with few other terriers including Cairn terrier, Skye terrier and Dandie Denmond terrier. During breed development, they were also crossed with Yorkshire and Irish terriers. Because of selective breeding, many verities are now available in the market.

They are very gentle, affectionate and generally avoid conflict with other dogs. In the past, they were used to control the mice and rats in UK. Despite of their smaller size, Australian terriers are courageous. They can be aggressive to other dogs sometimes. Australian terriers like to play leadership role and because of this reason they sometimes might not safe for young children who doesn’t know about dog handling.

In 1906, the Australian terrier was shown for the first time at a dog show in Melbourne. This breed is recognized by all kennel clubs around the world. Average life span of Australian terrier is 11-15 years. Dogs of this breed are generally healthy but cancer is common in old animals. Most commonly reported problems associated with this breed are diabetes, cranial cruciate ligament disease, ear infection and cataracts. They are energetic, responsive and protective. Because of these reason these dogs are suitable for apartment living. They are active indoor pets but care should be taken when they are provided with a yard because they have a tendency to chase.

Australian terriers should be given chance to show their leadership. Otherwise behavioral problems may arise. These breeds are special and have unique mentality, so the owner must need to be concerned about their mental need too. Frequent teaching of new tricks always keeps them focused and happy.

1. Original rough coated terriers were used bred to eradicate mice and rats
2. Median longevity of Australian terriers are between 11-12 years
3. Major causes of death is cancer, around 67%
4. Stanley Coren ranked them 34th in ‘The Intelligence of Dogs’

Australian terriers are found in many countries. They are native in Australia but, they can be found in UK, Ireland, United States and other regions of Europe. These dogs prefer open environment but they are suitable for small apartment too. It is because they can stay inside the apartment without showing any boredom. But daily exercise is required to maintain their health and spirit.

Indoor environment should be pet friendly. They must be allowed sufficient space to move freely or run. Since they like to chase, presence of smaller pets like birds or cats may influence them. Therefore maintaining indoor environment is also essential. They are very active and because of this reason they should not be left alone or confined. In that case you may find them unhappy and their action may be disastrous to your apartment or flat. 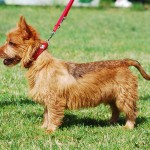 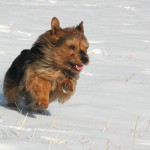 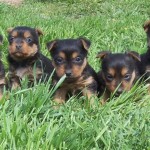 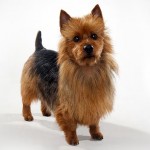 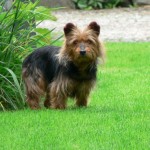 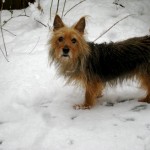 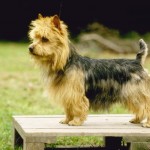 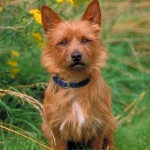 Australian terriers are highly spirited. They have natural aggressiveness as a hunter despite of their smaller size. They are intelligent, loyal and obedience. Because of their interest in working and obedience, they can be easily trained for various purposes. Most commonly they are used as watchdogs and protective companion. Australian terriers have a bossy temperament which often expressed as aggressiveness. They can be dog-aggressive like other terriers and because of that reason they should not be considered for a multi-pet arrangement. But they are friendly to their owners and enjoy playing or working with people.

Australian terriers are alert and have great eyesight. Therefore as a watchdog and family pet, they are perfect choice. They like to stay around and often show interest in learning new tricks. They have a barking tendency and if not told, they may continue barking for a long time. They also make a great companion during travel because of their socializing capacity and alertness. Weekly grooming practice and occasional bathing is mandatory to maintain their shiny body coat.

They always monitor their owner’s mental state. They have enough intelligence to sense the change in behavior. After completion of a task, a token of appreciation or a prize (like a piece of meat) often increases their performance.