“Angelfish” is a freshwater fish that was initially discussed in 1824 by Lichtenstein. Angelfish was given the scientific name ‘Pterophyllum Scalare’ which stands for ‘winged leaf’. The Angelfish was brought to the United States in the 1920’s to 1930’s. In the 1960’s, another Angelfish type was found.

Gosse explained this finding as P. Leopoldi. Initially, this Angelfish was under some other name until the name P.Leopoldi became a proper name. There are many types of angelfish that has yet to be found and named in the Amazon. There have been many new types of angelfish that is found in a very fast rate. However, most of these newly discovered angelfish outlook look the same with minimal differences. The P.Leopoldi has 29 to 35 scales in a sideways row and its contour predorsal.

The “Angelfish” is around 45cm in size. The Angelfish body is compact with a head that is circular and obtuse. Their body is shiny blue and yellow. There is a big blue blemish at the muscle base of the fin. Big angelfish has a purplish blue colour with scales that is yellow-orange.

The top of the head is yellow green mixed and this colour can be found under the eyes. Above the eyes, the angelfish spots a dark blue shimmering colour. Depending on the Angelfish type, some of them will have yellow colour tail. A dark circle mark is found on the fish’s forehead that exposes a crown type of look.

The “Angelfish” normally eats algae, jellyfish, plankton, tunicates, hydroids and bryozoans. However, their main food is sponges and they eat all these when they are out in the wild. Young angelfish will help the adult remove any skin eating parasite by feeding on those parasites when they are on the adult skin. Due to that, the young angelfish has high contents of algae in its food consumption.

When the angelfish is in the aquarium, it may be difficult to feed as their preference is sponges. To buy sponges and feed the angelfish is too costly. So, training your angelfish in a certain eating habit is necessary.

Replace sponges with squid, shrimp or even fish food with sponges in them. The Angelfish diet must include fungus on a daily basis so serving them spirulina would certainly make them happy. The Angelfish should be fed a lot of times instead of a big portion at one go.

There is not much information on the “Angelfish” breeding tactics. However, with the amount of Angelfish found in two’s, it is safe to say that the angelfish breeds with its partner. The actual breeding session happens with the male and female place their tummies together and the egg and sperm is released to begin the birthing process. They release around 25,000 to 10,000,000 eggs at one time.

These eggs will break in 15 to 20 hours. However, they are not birthed with the full sets of specific organs such as fins, stomachs and eyes so they eat their own birth sac. Once the babies finish eating the sac, they would have developed the missing organs. They will then start eating solid food such as sponges that is available at certain areas. The babies main aim is to help the bigger Angelfish remove their skin which is infected with fungus.

There are threats to the “Angelfish” when it comes to their sizes. The smaller the angelfish is the bigger their threat will be. If they are about 6 inches, their main predators are snakes, dolphins, sharks and so much more. The bigger Angelfish has the capability to be fast swimmers thus avoiding any predators is their biggest capability.

The “Angelfish” is truly special in terms of their sizes and shapes that it makes them popular to fish owners and buyers. Their fins look like staircases and their fins take on a leaf outlook. The Angelfish is a fish that is cold blooded and their temperature is controlled by their high metabolism rate.

The “Angelfish” can live for 10 to 15 years. Due to their metabolism rate, the Angelfish does not have long life. It is important to keep their aquarium at the right temperature as it will ensure they live longer.

The “Angelfish” can be found at the Amazon River in South America. They are tuned to mild acidic water, where majority of vegetations and tree roots is found. Angelfish is easy to keep when it is reared in an aquarium. You can always find an Angelfish in every pet shop that sells fish.

The Angelfish is special in their shape and they always acknowledge people who come to see them at the aquarium. People do not fish Angelfish anymore since the breeders themselves have mixed bred the fishes for the sole purpose of providing variety. 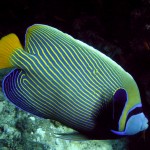 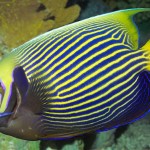 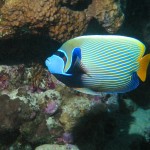 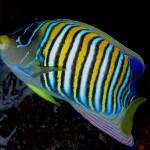 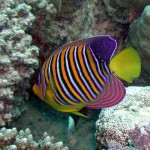 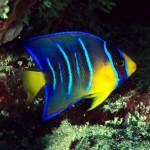 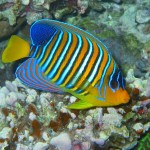 “Angelfish” is known to be a very leader type of fish that is very violent. Angelfish have a tendency to fight among themselves be it whether they are from the same clan and type. It is important to choose Angelfish that match each other instead of ones that fight with each other.