Alan Espanol, also popularly known as Spanish Bulldog owing to its Spanish origin, is a Molosser breed known for its historical use during bullfights and bull baiting in Spain. The name of the dog has been derived from a nomadic group named as Alana that keeps guardian dogs for livestock protection. History suggests that they brought the Alano Espanol breed with them when they came to Spain during the fifth Century.

As mentioned above, this breed was brought to Spain by the Iranian nomads in as early as fifth century. Thus, this breed is the oldest breeds of dogs. There are several theories that clarify its origin; however, they say that the original Spanish Alanos is the ancestor of the breeds today known as Great Dane and Dogue de Bordeaux. They were also present in other parts of Europe but especially in Spain, they have survived for as long as 1500 years.

Historically, Spanish Alano was utilized for the following tasks :

Over the years, it has evolved to be used exclusively for hunting and protection of cattle.

The colors that Alano Espanol generally have are fawn, red, sable yellow, black and tan.

The breed group of Alano Espanol is Mastiff.

Alano Espanol should be kept in a fenced yard where they may also have enough space to sleep and walk around. They have a great tendency to survive in extreme cold and hot weathers, dryness and humid atmosphere. The extreme weather experienced in Spain in both lows and highs are extraordinary and Spanish Alano stands all these temperatures really well with great adaptability as it is used to living outside the house.

They naturally fall under the category of working dogs, so they are used for high energy activities. If you are keeping it as a pet dog, you need to make sure that it gets daily exercise.

Since Alano Espanol is a large-sized dog, it requires equally good amount and high quality food, which usually should measure between 3 and 4 cups every day to maintain its energy and vigor. Nevertheless, they should not be given it all together but in different time intervals to prevent them from bloating or other health complications. You may want to divide this amount into two parts,

The average lifespan of Alano Espanol is between 11 and 14 years.

Alano Espanol is a large-sized and muscular breed which moves very elegantly. It is also characterized as a well-built dog with thick bones and a heavy skeleton. Because of this dog’s appearance, it is very wells suited for the hunting function and holding big wild animals. Also, with its strong legs it can run with good speed for a long period of time.

The grip of tis dog is very popular. It uses its whole jaw to bite and hold wild animals during hunting and will only release the prey when they are commanded. The rib cage of this breed is firmly arched and not in a cylindrical shape. Alano Espanol is famous to have strong front legs as compared to the back ones and are relatively more upright. They have larger paws and thicker tails at the base, which aid them for the hunting activity.

Their double chins are pretty visible on their strong necks. They generally have a serious expression that is partly because of their large and wide nose with fairly open nostrils. Their ears are a little rounded by the edge.

As mentioned above, this breed was brought by early Iranian explorers while migrating to Europe, especially in Spain as early as fifteenth century. These nomad pastoralists used this breed for hunting and guarding of their livestock. In literature, the first formal reference about these dogs can be traced back to the fourteenth century in the Book of the Hunt of Alfonso XI. They were referred to as hunting and war dogs. In the 15th century, this breed was again revived as war dogs by the Spanish Empire.

This breed of dogs has worked in rough times and extreme weather and has been popular to do courageous activities and thus, it is a very healthy breed. It is not likely to catch diseases so quickly and survives extreme environments. They also have a good self-recovery and healing power. Nevertheless, it is always safe to medically test them for hip dysplasia. Also, bloating may occur to them because of heavy and large amount of food given all together.

These dogs do require a little grooming. It should be only bathed when necessary because if it is done excessively, it can remove a lot of its natural skin oil. It should be brushed with a rubber brush that will assist in shedding its rustic hair and it will also prevent in hair shedding done inside the house. The brushing will also help to maintain the amount of oil consistent through his body. Also, keep in mind that it is mainly an outside dog so should be kept outside most of the time. It is an average shedder. 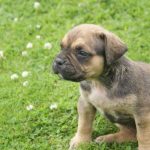 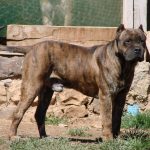 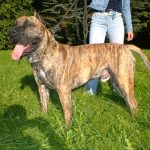 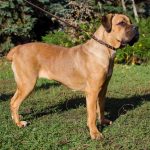 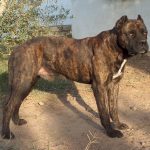 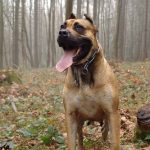 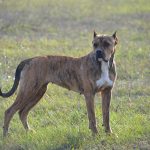 Alano Espanol is a great family dog and socialize with humans really well. It also socializes and behaves well with other dogs unlike the other breeds. They are in need of consistent training to keep their temperament normal.

Alano Espanol is known to be very obedient and respectful. It has a well-balanced personality and thus is safe as pets. Due to their hunting capabilities, their personality is bent towards the dominant side. However, they respond to the command of their owners very well and act submissive towards them. They are very patient with children and they do keep a watchful eye around strangers. They also tolerate pain well and show no fear to anything whatsoever.